In 24 hours, Floyd Mayweather and Manny Pacquiao will square off in what is predicted to be the richest boxing match of all time. As we have covered on a number of occasions, early estimates predicted that $300 million would be generated by the fight. A clear record for a single boxing match. As it turns out, $300 million was a low estimate. Today the fight is expected to bring in closer to $400 million from Pay-Per-View, foreign TV rights, sponsorships, merchandise and the live gate (arena ticket sales). After vendors and all the various costs are paid off, Floyd and Manny will split the fight's profits 60/40. When it's all said and done, each boxer will receive in excess of $100 million. The most recent estimate is that Manny will earn $100 million and Floyd will earn $150 million. So how exactly does someone get paid $150 million from a boxing match? Are there upfront guarantees? Wire transfers? Checks? What about taxes? I'm glad you asked! Let's break down the precise financial details of the Mayweather-Pacquiao fight… 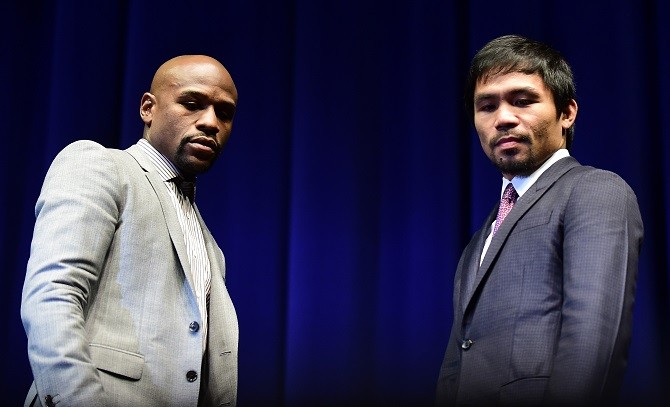 Manny on the other hand gets paid an advance to show up. According to a report from the New York Times, Manny will receive his advance this coming Monday (April 20), in the form of a $50 million check. Ok, if you want to get technical, the check that Manny actually receives will be around $35 million, because 30% will have already been taken out for the IRS.

Floyd will pay himself an upfront advance as well, but it will be much smaller than $50 million. In previous fights that Floyd has orchestrated, he has paid himself $20 million, roughly a month before the match, to cover some expenses and such. But, as you might imagine, the real money comes almost immediately following the match.

Let's say analysts are correct and the fight ends up generating gross revenues of $400 million. Roughly 30% will go towards a variety of expenses. That leaves around $280 million in profits. According to their 60/40 split arrangement, Manny will receive an additional $62 million on the backend to bring his total income up to $112 million. That's roughly what Manny has earned from his last five fights, combined. It will be roughly $78 million after taxes.

$112 million will bring Manny's career earnings total up to $375 million.

$168 million will bring Floyd's career earnings total up to $578 million.