These 9 Celebrities Are Cashing In On The Marijuana Green Rush

Marijuana, which up until very recently, was considered a taboo subject, has quickly found its way into the forefront of mainstream conversation. The drug, which is legal in some shape or form in 24 states in the U.S, has become big business for several who have cashed in on the cannabis craze. Let's take a look at some celebrities who are looking to make some green off of the green.

The family of the man many look at as one of the faces of marijuana culture has a deal with Privateer Holdings, a marijuana-only investment fund. The deal entails marketing a line of cannabis products under the name Marley Naturals, which will include branded cannabis flower and oil, in addition to bath products like lotions and body scrubs.

The Toronto native signed a deal with a company named PAX to lend his name to a line of tobacco and marijuana vaporizers. The vaporizers, which featured his trademark "XO" logo were sold during his "The Madness" Fall Tour for $325.

Wiz is one of the most famous marijuana proponents on this list, and has made some big moves to make some money off of one of his favorite activities. He teamed up with "The Cookie Co.", a California dispensary, to release his own strain of marijuana called "Khalifa Kush," which is a reflection of his personal preference when it comes to weed.

In addition to his partnership with "The Cookie Co.," Wiz also teamed up with River Rock Cannabis to expand the Khalifa Kush line into Colorado, which has legalized recreational marijuana use.

Wiz has also teamed up with RAW rolling papers to create a line of pre-roll tins which feature 3D art, in addition to cones that can fit more marijuana than standard cones. 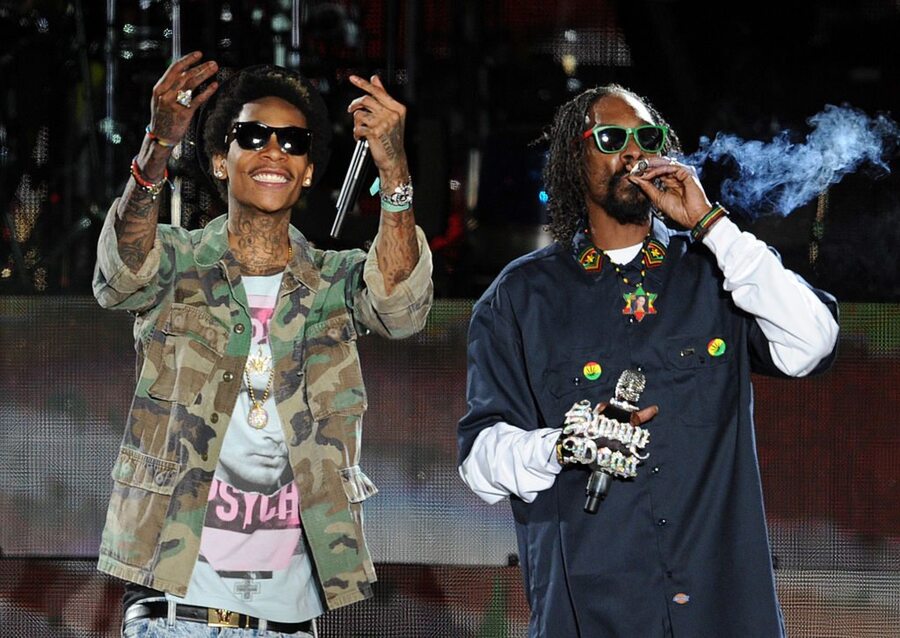 Seth Rogen actually partnered up with the aforementioned Snoop in the foundation of MerryJane.com, which, in addition to being the weed encyclopedia, also aims to correct some of the misinformation spread by those who are against marijuana usage.

Willie Nelson and Tuatara Capital have teamed up to develop and release a brand of marijuana which carries Nelson's name. "Willies Reserve" will be sold in Colorado within the constructs of the state's regulated marijuana market.

The 54-year-old musician has partnered up with Greenway Compassionate Relief, a California-based medical marijuana dispensary, to release "cannabis-infused fine wines," but as a result of legal restrictions, she can only call the drink a "wine tincture."

Williams has been a strong advocate of medicinal marijuana as a result of own experiences with using marijuana to cope with the symptoms of multiple sclerosis. He has opened his own dispensary in Northern California, and is also looking to pass marijuana legalization in Ohio.

Tommy Chong, one of half of the marijuana-happy comedy duo Cheech & Chong, has released a couple of cannabis-related products. One of them, Smoke Swipe, is an odor remover than his formulated to specifically remove marijuana odors from clothing. He has also released his own brand of weed called Chong Star.