GoPro Stock Is Up 220% Since The IPO. Founder Nick Woodman Is Now Worth $5 Billion

By Brian Warner on September 29, 2014 in Articles › Celebrity News

Almost exactly three months ago, on June 27, GoPro debuted on the NASDAQ stock exchange. The opening price on IPO day? $28.65. Current trading price? $87.60. That represents a 220% increase in the last 90 days. As of this writing, the company has a market cap of $11.04 billion. At that level, company founder Nick Woodman is worth $5 billion.

We've written pretty extensively about Nick and GoPro in the past. If you want a detailed back story, I suggest you read this article:

How A Former Surfer Became A Billionaire Thanks To GoPro Cameras 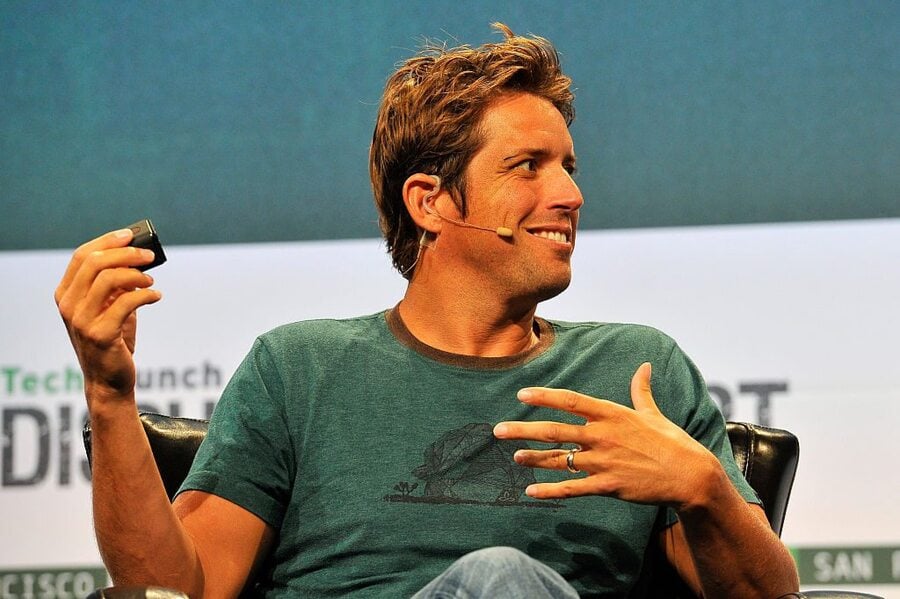 Nick Woodman's first tech venture was an online gaming site called Funbug that crashed and burned in the original dotcom bubble. His investors lost $3.9 million. In order to clear his head and recharge his batteries, after Funbug collapsed Nick embarked on a month-long surf trip to Australia and Indonesia. It was meant to be a last fling before he came home and got a normal job.

On that trip, Nick brought along a gadget he made out of a broken surfboard leash and rubber bands that allowed him to secure a waterproof disposable camera to his wrist so that he could take the perfect picture when the wave was just about to hit. After five months, Woodman returned to California with the germ of the idea that would turn into GoPro. He was 27-years old.

The first iteration of the GoPro was actually just a 35mm camera attached to the palm of Woodman's hand by a rubber band. Eventually, these early experiments resulted in a simple solution. Using 3-D design software, Woodman created a prototype for a plastic case that would cover a small camera.

Nick's father Dean is probably the happiest dad on the planet. Dean Woodman owns 7.25 million shares that are currently worth $645 million. Not a bad little return on a $200,000 investment!

Is This A Bubble?

The first major cautionary tale for GoPro is Flip. There was a time when the whole world was going nuts for Flip Cams. Flip was the first camera that allowed the average person to film HD quality videos from the palm of their hand. The company was so exciting and seemingly revolutionary, that Cisco bought it for $500 million.

What happened next? A little thing called the iPhone. All of a sudden, pretty much every cell phone on the planet had HD video capability. In an instant, Flip was rendered irrelevant. Why carry around a Flip, when you already have a phone sitting in your pocket?

Within a year of the acquisition, Cisco wrote off their entire $500 million purchase.

The second major cautionary tale for GoPro and Nick Woodman is Funbug. Look, I have no idea if this is a bubble or not. I'm not an expert in the stock market and you shouldn't take stock tips from me. BUT! I will say that hopefully Nick learned enough from his experience with Funbug to cash out a respectable rainy day fund, on the off chance that this does turn out to be another big bubble waiting to explode. As CEO, this can be hard to do without setting off investor fears or upsetting the Securities Exchange Commission. But there should be a way to conservatively sell off a set number of shares every day, regardless of good news or bad news. If it were me, I would try to put away at least $100 million in cold hard cash.

I really have no idea what will happen next with GoPro or the stock market. Do you think we're in a bubble? Do you think GoPro will keep marching higher?