By Brian Warner on October 31, 2012 in Articles › Celebrity News

Earlier today, George Lucas announced that he was selling 100% of his company, Lucasfilm, to the Walt Disney corporation for a staggering $4.05 billion! Unlike most billion dollar corporate acquisitions where the founders' ownership stake is actually just a small percentage, George Lucas owns 100% of Luscasfilm and its family of companies like THX, Industrial Light and Magic, LucasArts and Skywalker Sound. That means overnight, George Lucas just more than doubled his net worth from $3.3 billion to $7.3 billion! But perhaps more impressively, Lucas could earn an even bigger fortune off the deal in the coming years… 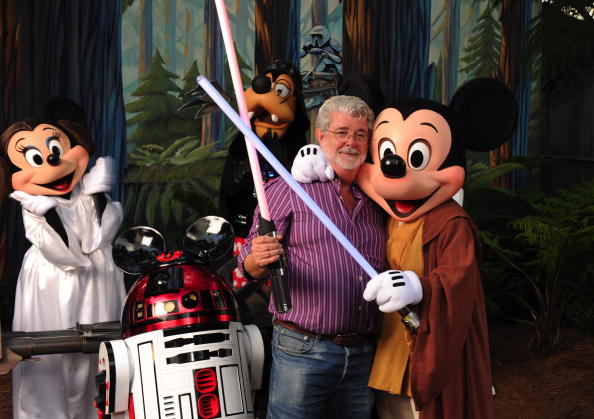 According to the official press release, Disney will pay Lucas $2 billion in cash plus 40 million shares of common stock at Tuesday's closing price of $50 per share. The fact that Lucas is taking half the deal in stock is a sign that he sees this transaction as an investment for the future, instead of just a quick way to cash out. Considering the fact that Disney's stock is up more than 32% this year, from a low of $38 to a recent 52 week high of $53 per share, Lucas' payday could increase by hundreds of millions, if not billions of dollars.

George Lucas' decision to sell his company to Disney shares many similarities to when Steve Jobs sold Pixar to Disney in 2006 for $7.6 billion. Most people don't realize that when Steve Jobs died, the majority of his $8.3 billion net worth was made up from from his stake in Disney, NOT Apple. When Jobs was fired from Apple in the late 80s, he sold 100% of his shares out of anger and resentment. When he returned to Apple in 1996, Jobs was given 5.5 million shares of the company, worth roughly $3.3 billion at the most recent closing price of $604 per share. When he sold Pixar in 2006, he was given 138 million shares of Disney, which are worth roughly $6.9 billion today. More than twice the value of his Apple shares.

This is not George Lucas' first shrewd investment decision. Back in 1977, Lucas agreed to take a very small upfront fee from Fox Studios in exchange for keeping all the rights to the Star Wars merchandise, sequels and licensing. To date, Star Wars has earned more than $4.4 billion at the box office alone, and countless billions more from thousands of licensing and merchandise deals. The point is, this is not just a one time cash out for George. Today Disney also announced that they are already planning to film many more Star Wars movies starting with "Episode 7" which is slated for release in 2015. Lucas will serve as a creative consultant. If Disney can apply their movie making and marketing magic to the future Star Wars releases and the massive library of older content, this could turn into a very lucrative deal for all parties. Just look at how successful Disney has been at managing Marvel films like The Avengers and all the Pixar smash hits like Cars and Up. When it's all said and done, I bet Lucas will take home way more than $4 billion.

Are you excited for more Star Wars? Do you think the Disney sequels will be better than the Lucas prequels?