By Brian Warner on February 28, 2013 in Articles › Celebrity News

Joe Flacco is having a really good day. First of all, last night Flacco and his underdog Baltimore Ravens defeated the San Francisco 49ers 34-31 in Super Bowl XLVII. Flacco was named MVP after throwing a textbook perfect game and as a reward was handed the keys to a brand new $60,000 Chevrolet Corvette Stingray. But that's not the only reward Flacco is set to receive. After the game, Flacco and his wife Dana announced that they are expecting their second child, a son! And to top it all off, as of today Flacco is a free agent which means Joe is in the best position imaginable for an athlete to re-negotiate his contract and earn an absolute fortune in the years to come.

***Update*** On March 1st, 2013, Joe Flacco and the Baltimore Ravens agreed to a $120.6 million dollar deal. This deal, for the time being, makes Flacco the highest paid player in NFL history. The Packers are expected to surpass this deal when they re-sign Aaron Rodgers soon. At that rate, Flacco will earn an average of $20 million in base salary per year which equates to roughly $170,000 each in season day, for six years. 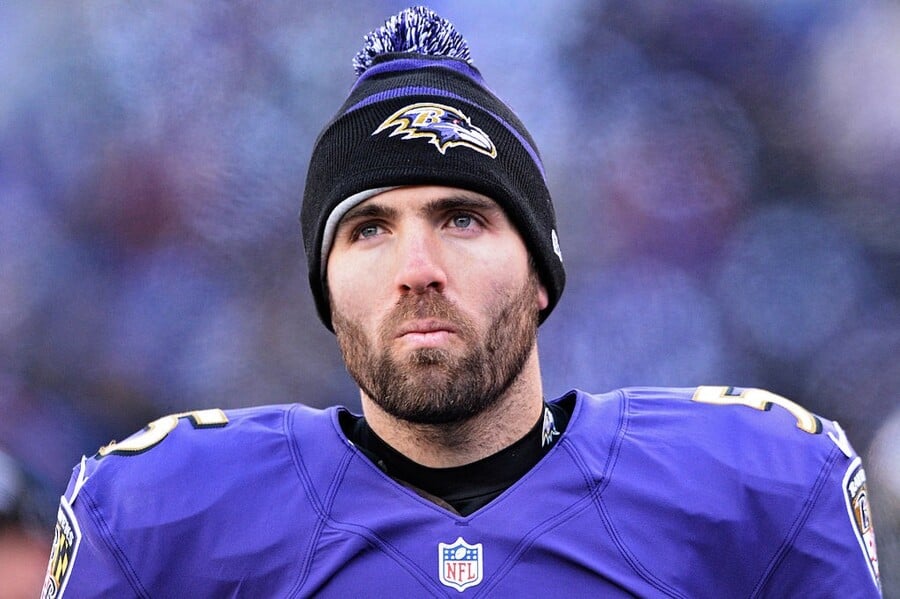 Prior to yesterday's win, Joe Flacco had been one of the most critiqued and doubted quarterbacks in the NFL. In the weeks before the game, Flacco's own father referred to him as "dull" in an interview. Another term Joe has struggled to overcome is "elite". In a pre-season interview, Flacco referred to himself as an "elite" quarterback who was potentially "the best in the NFL". Critics rushed to point out that Joe had never been to a Pro Bowl, let alone a Super Bowl, so the term "elite" did not fit. He also didn't exactly have an elite level paycheck. For the 2012-2013 season, Joe Flacco's salary was $4.61 million which is less than a quarter of the $20 million that Peyton Manning brings home a year.

All that's about to change! After throwing 287 yards, three touchdowns and zero interceptions to win the Super Bowl and be named MVP, Joe Flacco has officially silenced his critics. He's also about to get a pay bump to match his newly minted "elite" status. As a free agent who is in the prime of his career, Joe Flacco and his agents will be looking to secure a monster new deal that could pay as much as $20 million per year. There are nearly a dozen teams who are in desperate need of a quarterback and would do just about anything to land the Super Bowl MVP. Flacco's Ravens will have the ability to match any incoming offer but matching might get really expensive. If the Ravens want to shut the negotiations down now, they have the option using their franchise tag on Flacco. When this happens, the Ravens prevent Flacco from taking other offers but in turn they are required to pay him a salary equal to the average of the five highest earning QBs in the NFL. The top five highest paid QBs in the NFL today are Tom Brady ($21.55 million), Matthew Stafford ($20.82 million), Eli Manning ($20.35 million), Peyton Manning ($20 million) and Ben Roethlisberger ($19.6 million). That averages out to $20.464 million for Flacco, which is roughly $16 million more per year than he is currently making. In total, Flacco and his agents are likely looking for a multi-year $100+ million deal, comparable to the $96 million deal Peyton Manning got from the Broncos before this season. When he was interviewed on the NFL Network after the game, Joe Flacco had an amazing line in reference to Ravens owner Steve Bisciotti:

"Steve Bisciotti told me that if this happens, then I can go pound on his desk and really stick it to him. And I said that's exactly what I'm going to do."

There's one other factor Joe must consider…

If the Ravens do not end up using their franchise tag, Flacco will be free to consider any and all offers. There are roughly a dozen teams in the NFL who would kill for a Super Bowl MVP quarterback. More importantly, of those teams, several are located in states that do not have an income tax. If Joe receives offers from the Jacksonville Jaguars, Tennessee Titans, Tampa Bay Buccaneers or the Arizona Cardinals, he instantly gives himself a 10% raise because Florida, Tennessee and Arizona do not have state income tax. In other words, assuming Joe gets offers that are looking to pay him $20 million a year, by playing in a state without income taxes he'll save $2 million a year.

And as for the Corvette, if Joe accepts the $60,000 car he will owe the IRS $25,000 in taxes. When you take possession of a gift or reward, the IRS gets a cut. On the other hand since this was a "civic reward" that Joe never actually requested or expected to receive, he has the option to decline the gift or instructing Chevy to donate it to charity. If he chooses to donate the car he has to do so immediately. He can't drive the car at all and he can't even have it delivered to his house to look at.

So where do you think Joe will end up next year and would you keep the Corvette?