I'm not ashamed to admit that I have found myself in a gentleman's club on a handful of occasions during my life. BUT! As someone who is naturally thrifty when it comes to personal finances, I kind of hate them. I was in a strip club not long ago for a friend's bachelor party. I was the best man, so I felt obligated to buy him a private dance. One private dance turned into three and in the end I ended up spending around $200. Even though the money went to a good cause (the groom's momentary enjoyment and the dancer's future college fund – ha!), I still felt extremely annoyed the next day to have blown so much money at a strip club. What a waste. I swore I would never let that happen again. Then again, I guess it could be worse. At least I'm smart enough to not spend $1,000 every time I walk into a strip club. Or $5,000. Or $10,000. Or, a mind exploding $30-$40,000!!!!

Matt Barnes is an NBA player who is currently a member of the LA Clippers. Matt was drafted into the NBA by the Memphis Grizzlies in 2002 and then spent his first few years floating around the ABA, D-League and various other lower level camps. In 2004, he was brought up to the Sacramento Kings. In 2005, he spent half a season with the Knicks and half a season with Philadelphia 76ers. While in Philly, one of Matt's teammates was Allen Iverson. 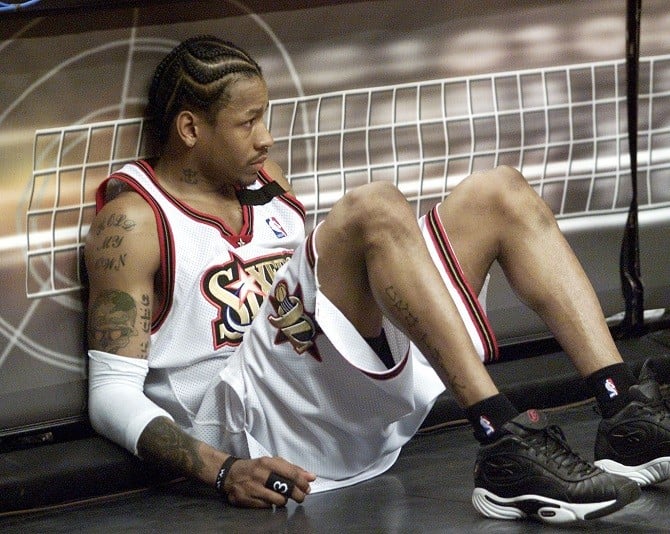 At the time, Iverson was a slightly fading star on the backside of his career. On the flip side, he was still pulling down $16 million a year in salary alone. At the time, Barnes was earning league minimum $552,269.

As a more senior player, Iverson offered a lot of lessons to his younger teammates. Most of those lessons involved what NOT to do and how NOT to behave. In a recent Sports Illustrated interview, Matt Barnes recalled a prime example:

"Allen was the first guy that showed me how NBA players spend money in strip clubs. That guy went. HARD. He'd throw so much money, and this was when I was first in the league, that I used to take my foot and scoop the shit under my chair and either re-throw it or put some in my pocket. He'd throw $30,000, $40,000 every time we went. I'm like, 'You realize what I can do with this money?'"

Wow. $30-40k thrown away every time he went to a strip club!!?? Now it's starting to become clear how AI was able to blow through the nearly $200 million he earned from salary and endorsements (before taxes) during his career!

As you've probably heard, Iverson is one of the most famous athletes in the world to encounter severe financial problems when he left pro sports. In February 2012, a Georgia judge ordered that all of Iverson's bank accounts be seized to help payback a $900,000 debt owed to a local jeweler. In a previous filing, Iverson told the judge that his monthly income was $62,500 but his expenses were $360,000! Of that $360k, $125k reportedly went to paying back various creditors, with another a large chunk goes to mortgages.

He obviously didn't blow all of his money at strip clubs, that is just one example of Allen's horrendous spending habits. Throughout his career Iverson's wasteful spending was legendary. He frequently traveled with an entourage of up to 50 people. He showered these same people with luxurious jewelry, expensive cars and exotic vacations. He was also a bad gambler in both senses of the word. Iverson was known to drop over a million dollars gambling in a single evening in Las Vegas and Atlantic City.

Allen famously has a $30 million trust fund from Reebok that he can't touch until the year 2030 when he is 55 years old. And to make matters worse, when he does finally inherit the trust it will be $15 million less than he originally planned thanks to his ex-wife. The existence of this trust fund came to light after it was revealed in divorce disclosures that his ex-wife Tawanna was awarded 50% of that rainy day fund, to be delivered at the same future date. So they are both out of luck for another 15 years.