In case you haven't heard, former BFFs 50 Cent and Floyd Mayweather are in the middle of very bitter and very public social media war. To recap: Back in 2012, Floyd and 50 were pretty much inseparable buddies. They partied together. They Trained together. They vacationed together… At one point they had plans to launch a boxing promotions co-owned company called TMT Promotions (TMT stands for "The Money Team"). Then, all of a sudden, they had a huge falling out. In November 2012, fans of this fairy tale bro-mance were shocked when 50 Cent tweeted that he was no longer involved with TMT Promotions. 50 also asserted that Floyd screwed him out of a $2 million investment. In response, Floyd sent out a barrage of insulting tweets in which he pretty much called 50 Cent an ass kissing bitch with a fading career. Ouch. 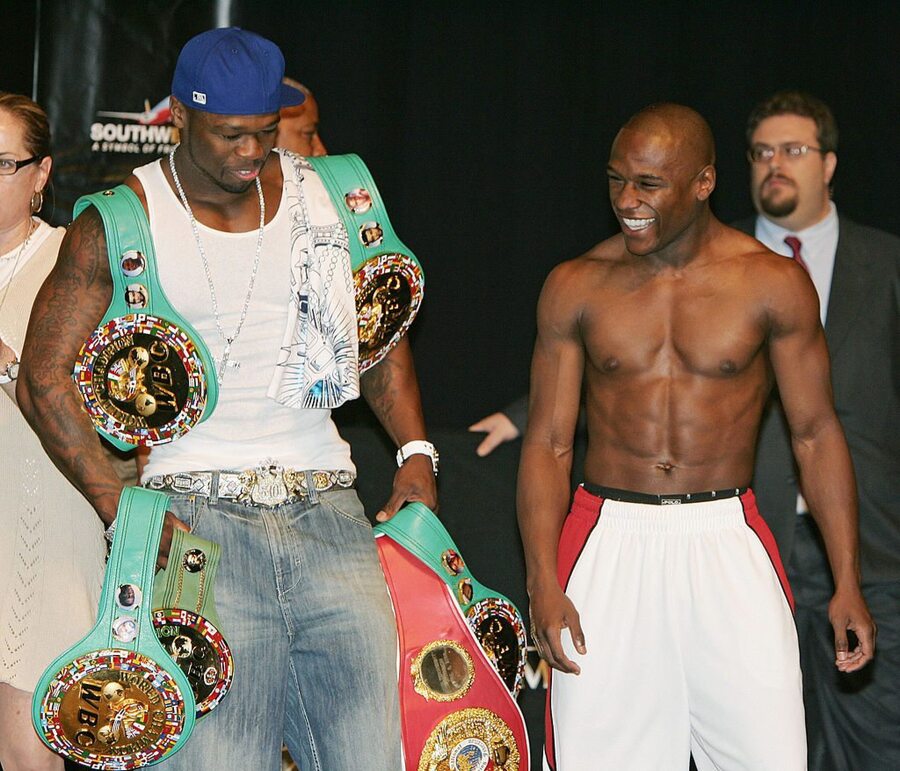 The feud was fairly quiet for a while, but then last week Floyd brought up all the bad blood again in an interview with M-Live.com. In that interview, Floyd again basically insinuated that 50 Cent, Nelly and T.I.'s careers were drying up and that he was the only person still bringing home massive checks.

No longer content to sit back and take the insults, 50 Cent immediately responded with two instagram videos directed squarely at Floyd. In the first video, 50 tells Floyd that he should really be mad at Nelly alone because apparently Nelly had sex with Floyd's first baby mama then stole his fiancee Melissa. Ouch.

In the second video, 50 took the war to a whole new level by announcing to the entire world that Floyd can't read. 50 Cent even offered to donate $750,000 to Floyd's charity of choice if he reads one page of a Harry Potter book "out loud without starting and stopping or fucking up". Ouch. That second video now has nearly 300,000 views and over 100,000 comments on Instagram.

Adding fuel to the fire, 50 Cent followed up his videos with this amazing photoshop of boxing posted that features Floyd and Danielle Radcliffe. "Mayweather Vs Harry Potter: Who's The one?"

And the photoshopped images kept coming. The next one showed a sweaty Floyd attempting to read Dr. Seuss' "The Cat in the Hat". The one after that photoshopped 50 and Floyd into that scene from Billy Madison when Adam Sandler makes fun of the kid who can't read. Ta ta ta ta ta ta today JUNIOR!

Next, Jimmy Kimmel stepped in to offer Floyd the chance to come on his show and read Harry Potter. Floyd didn't respond. Word continued to spread across social media and the mainstream news, but Floyd was uncharacteristically silent for the next two days.

Though he did not directly respond to the illiteracy allegations, the tweet definitely packed a punch, but it didn't silence 50 Cent for very long. Earlier this morning 50 posted another instagram video with the following caption: "I guess you want people to see your math is better then your reading. Get a account Floyd, the people around you are using you. If you mad at me call me or come see me." In the video itself, 50 says "Nigga, you know I got money. The checks say Golden Boy. That means you work for Oscar, bitch?".

Oh, btw, in case you're wondering why Floyd actually receives paper checks instead of an electronic wires, there's actually a reason. The Nevada Sate Athletic Commission actually requires that boxers be paid in paper checks that are hand delivered. After being certified by a licensed witness, the Boxers then have the option to return the checks and have the funds wired.

Not gonna lie, I kind of love this war. These guys have unlimited money, loads of free time and millions of social media followers. Neither seems interested in holding back or burying the hatchet, so as long as nobody gets hurt, this should continue to be pretty fun to watch for a while.