The "Fight of the Century" between Floyd Mayweather and Manny Pacquiao turned out to be, well… more like the long distance marathon of the century. In fact, you could argue it wasn't even the fight of the night, as the Clippers and Spurs played a thoroughly entertaining Game 7 before Floyd and Manny even touched gloves.

When the fight did start, Manny didn't look like his old self. Then, when it was all said and done, he admitted that he was actually nursing a shoulder injury before and during the match. This injury now requires surgery and will keep him out of boxing for a minimum of nine months.

The news and timing of this injury announcement aren't sitting very well with a group of boxing fans. And these angry fans aren't simply airing their grievances on Twitter, they are filing lawsuits. 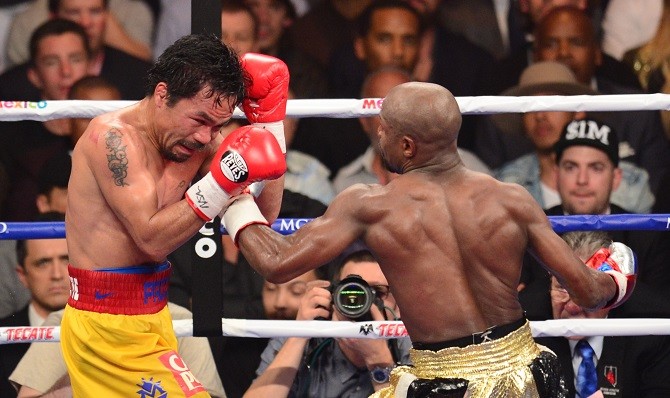 As of this writing, five different lawsuits have been filed against Pacquiao, his managers, his promoters, HBO, Showtime, AT&T, Comcast and DirecTV, for allegedly hiding an injury. Each lawsuit is seeking in excess of $5 million in damages on behalf of anyone who paid for a ticket to the live event or ordered the Pay-Per-View.

The primary suit claims Pacquiao and his manager, Michael Koncz, his promotional company, Top Rank, and its chairman Bob Arum and its president Todd duBoef all knew about Pacquiao's injury well before the fight. The lawsuit alleges that they kept it secret from fans who paid for the fight either by buying tickets to see the event in person, or by purchasing the Pay-Per-View.

Despite lasting the full 12 rounds, Mayweather won in a unanimous decision, and the fans filing this suit feel that the fight wasn't properly promoted, and that it violated the Nevada Deceptive Trade Practices Act.

Daniel Petrocelli, an attorney for Top Rank, Pacquiao's promotional company, is calling the lawsuit "frivolous," and claims Pacquiao provided documentation of the medication he was taking. Petrocelli says Pacquiao further aggravated his shoulder during the fight, but the original injury did not impact his performance in any way.

The really crazy part of this situation is that the merits of the legal argument could hinge on a simple checked box on a form. One day before the fight, Pacquiao was required to fill out a "Pre-Fight Medical Questionnaire."

Halfway down the page, there is the question, "Have you had any injury to your shoulders, elbows, or hands that needed evaluation or examination?" Manny checked "no." This questionnaire is being submitted as an exhibit in the class action lawsuits. If it's discovered that Manny did indeed lie about his injury, he could face a fine or a suspension. Though it's also not too far-fetched to think we've already seen Manny Pacquiao fight his last match.

After the fight, Manny did admit that his shoulder was in fact injured prior to Saturday and that he had been recently receiving treatment. He also admitted after the fight that he had only been at "60%" of his normal power.

As we have mentioned on numerous occasions here at CNW, it's estimated that Manny will earn $120 million from the fight while Mayweather will earn $180 million. Those figures could be threatened if a judge deems that there was in fact some form of fraud and that these lawsuits have merit.

"I feel terrible [for anyone] who spent four figures on a ticket. I feel bad for people who spent 90, 100 dollars on pay-per-view who were not given proper information in advance on what it was they were seeing. I think there may be a constituency of people who think it's in some way noble and brave for Pacquiao to go ahead and enter the ring with an injury and try to perform, but I think that the only way that would wash is if the public had known in advance, and to have gone ahead with the enterprise when one of the fighters turns out to be damaged goods."

Update! As of May 7, a total of 13 class action lawsuits have been filed. Three in Nevada, three in California, two in Florida, and one in Maryland, New Jersey, Illinois, Texas and New York. One of the plaintiffs filing from Florida is a bar called Passion Nightclub at the Hard Rock which paid $3500 to show the fight.

Did you order the fight? Do you think this was fraud and do you want a refund?