Maybe it should be called Fifty Shades of GREEN! E.L. James, aka Erika Leonard, is shattering every sales record in the world with her "Fifty Shades of Grey" book trilogy, and in the process earning a herself an insane fortune. Fifty Shades is an erotic story about a recent female college graduate who is seduced and dominated by a billionaire businessman. The books were initially popular with bored housewives and is now exploding on to the mainstream in 37 countries and dozens of languages. There's even a movie deal in the works. The trilogy of books plus the bundled version (all three in one) have dominated the top four positions of The New York Times, Publisher's Weekly and USA Today bestseller lists for months. Fifty Shades has sold over 20 million copies world wide in the four short months since the first edition was released. But in terms of dollars and net worth what does that mean for the author E.L. James??? Keep reading to find out exactly how much money Fifty Shades of Grey is generating from book sales and movie deals on a weekly basis! 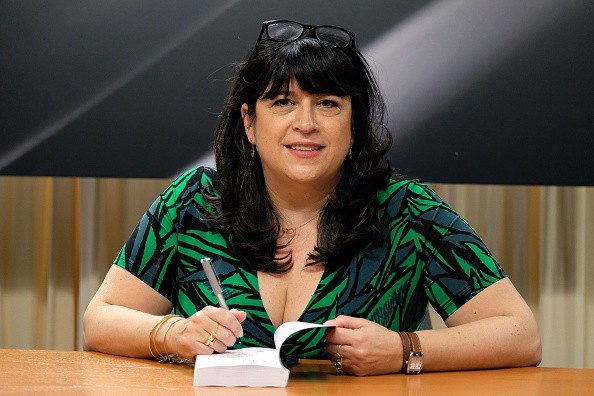 As of June 27, 2012, the combined total worldwide sales of the Fifty Shades trilogy is 20 million. The books have sold 15 million copies in The United States and Canada, 3 million in The UK and and another 2 million throughout the rest of the world. One month ago, on May 27, the sales total was at 16 million. That means Fifty Shades is now selling a combined one million paperbacks and ebooks per week! E.L. James now owns the records for fastest paperback to reach 1 million sales, fastest author to have three books sell over 100,000 copies per week, first kindle ebook to pass 1 million sales and highest selling ebook of all time.

It's safe to assume that E.L. James has long ago sold enough copies to repay her seven figure book advance, which means at this point she is earning the standard 7% royalty on every $14 paperback and 25% royalty on every $10 ebook. In the last month, James has sold 4 million paperbacks and 1 million ebooks which equates to $2.94 million in paperback royalties and $2.497 million in ebook royalties. In other words $5.4 million in four weeks, $1.35 million per week!

Authors receive royalty checks once every six months. Assuming the first month of sales went towards paying back her seven figure advance, and also assuming her sales don't evaporate completely, this September E.L. James will receive a check for roughly $20 million from publishing company Vintage Books. Add to that the $5 million Universal/Focus Features just paid her for the movie rights and E.L. James is having quite a year.

One interesting phenomenon that is occurring to James' benefit is that her books are selling an unusually high number of ebooks over paperbacks. This is most likely occurring because the racy subject of the books has made people embarrassed to be caught reading them in public. Whereas, reading it on your kindle or iPad is totally anonymous (minus the sweaty brow and flush cheeks). This is great for E.L. James because, as we described above, her ebook royalty is 25% of $9.99 = $2.5 for ever book sold compared to 7% of $14 = $0.98 for every paperback. And keep in mind, these books all started out as Twilight fan fiction which E.L. gave away for free initially! Makes me want to stop writing for CelebrityNetWorth and start writing a racy romance ebook for women!

Have you read Fifty Shades of Grey? What did you think of it? Worth the hype? Let us know in the comments!