Everything You Need To Know From Week 7 Of The NFL

Records, ejections, quarterback scrambles–they were all in high form during Week 7 of the NFL season. We're now down to just one winless team, and it looks like the parity in the league is stronger than ever. That means there are a lot of fantastic finishes this week, and we'll make sure you don't miss anything with our Week 7 recap.

We'll start with a nod to an absolute legend: Peyton Manning threw his 509th touchdown pass to Demaryius Thomas Sunday night, breaking Brett Favre's league record for most touchdown throws in a career. He added another one to Thomas later to end the night on an even 510. On #509, the Broncos receiving corps played keep away from Manning with the touchdown ball, which was just delightful. Manning finished 22 for 26 for 318 yards and four scores. 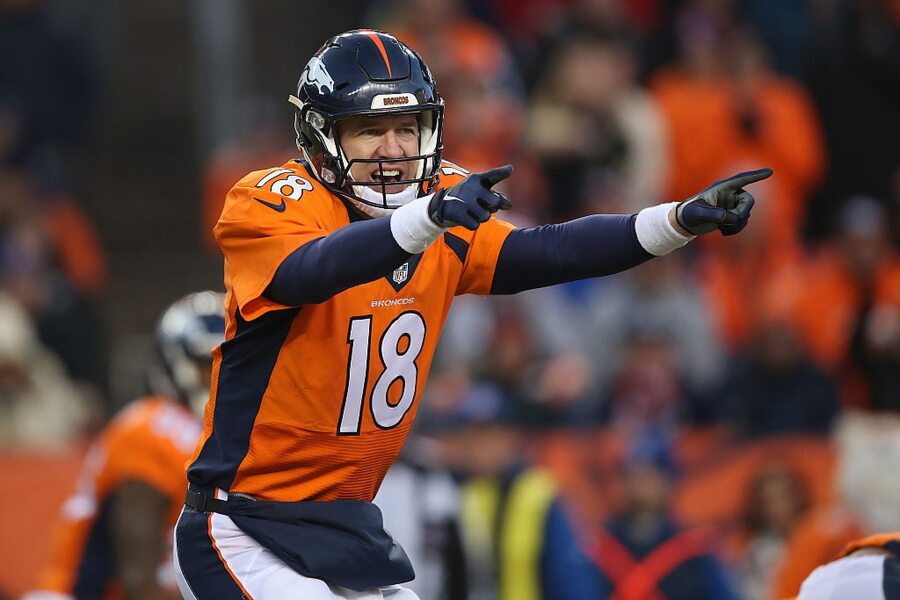 Leodis McKelvin had interceptions on consecutive throws from Teddy Bridgewater, his third and fourth picks of the season. Of course, Sammy Watkins and Kyle Orton deserve some mention, too. The rookie wide receiver had nine catches for 122 yards and two scores, including the game winner with one second left. Meanwhile, Orton shook off the team's four turnovers earlier in the game, and converted a fourth-and-20 and a third-and-12 on the final drive. Orton has now led the Bills to come from behind victories in two of his three starts.

Let's hear it for the Jacksonville Jaguars! They finally got their first victory of the season in a convincing 24-6 throttling of the Browns. Of course, they're still the Jags, so Blake Bortles only threw for 159 yards and had three interceptions, including a particularly terrible one in the red zone when he could have easily scrambled for a first down. Regardless, Denard Robinson bested his previous career rushing best by 99 yards, running 22 times for 127 yards and a score, joining fellow Robinson, WR Allen, as the top performers at the skill positions. Telvin Smith also had an interception he nearly returned for a touchdown on defense, and the Jaguars defense held the Browns, who came into the game rushing for over 146 yards per game, to just 69 yards on the ground.

Speaking of teams who have been feisty and competitive lately, the St. Louis Rams pulled off an absolute stunner, beating the Seahawks thanks to some special teams trickeration. Benny Cunningham had a 75-yard kickoff return to set up the Rams first touchdown. Later in the first half, the best punt return you'll see all year (and maybe ever) happened, as Tavon Austin acted like he was fielding a punt near the sideline. Most of the Seahawks coverage team drifted towards him–the only problem was it was actually Stedman Bailey returning the punt, and he was all the way on the other side of the field. By the time Seattle realized what was going on, Bailey had run 90 yards for a score. Finally, on a fourth-and-3 from their own 18-yard line, the Rams ran a beautifully-designed fake punt. Punter Johnny Hekker, who played quarterback in college, threw a dart to Benny Cunningham, and the Rams could essentially kill the clock from there. But in a game this intense, there had to be one more exciting play, right? Tre Mason gave it to us: after picking up the first down on a third-and-1, Mason could have just fallen down and St. Louis would win. But he kept running and had the ball knocked loose. Everyone seemed to fall on it, and it took the officials about five minutes to sort everything out, before possession was finally awarded to the Rams. Their defense also played tremendously well (at least for the first half); after just one sack through the first five games of the year, St. Louis piled up three sacks of Russell Wilson, and pressured him all day long.

Even in the loss, Russell Wilson played admirably. He became the first player in NFL history to throw for 300+ yards and run for 100+. He finished 23-36 for 313 yards and two touchdowns, and ran for 106 more yards and another score. Alas, he failed to convert a two-point conversion that would have tied the game, which makes it 55 straight weeks where the Seahawks have not had a successful two-point conversion.

We have a Colt McCoy sighting! The former University of Texas standout made his first appearance in over a year, and actually looked very good in relief of Kirk Cousins. McCoy's first pass was a 70-yard touchdown to Pierre Garcon. Most importantly, he didn't commit a turnover in going 11 for 12 for 128 yards in leading Washington to a 19-17 win over the Titans.

Ahmad Bradshaw is averaging one touchdown per game, and just recorded his first rushing touchdown in Week 7. He's on an absurd streak of at least one receiving touchdown in five of his last six contests, and continues to be a threat out of the backfield for the Colts.

Long quarterback scampers made an appearance on Sunday, as well: Russell Wilson scrambled for 52 yards on one play against the Rams; Ryan Tannehill ran an option-read on fourth-and-1 against the Bears, and kept running to the tune of 30 yards on the play; Blake Bortles picked up 18 yards on a run; Aaron Rodgers outscrambled Cam Newton, at least in terms of YPC, with his highest rush gaining 16 yards; and Drew Brees ran for 13 yards on a fourth-and-10. Even Eli Manning's lone scramble went for 11 yards in the Giants' loss to the Cowboys. For a Manning, that's like running for 1,000 yards. 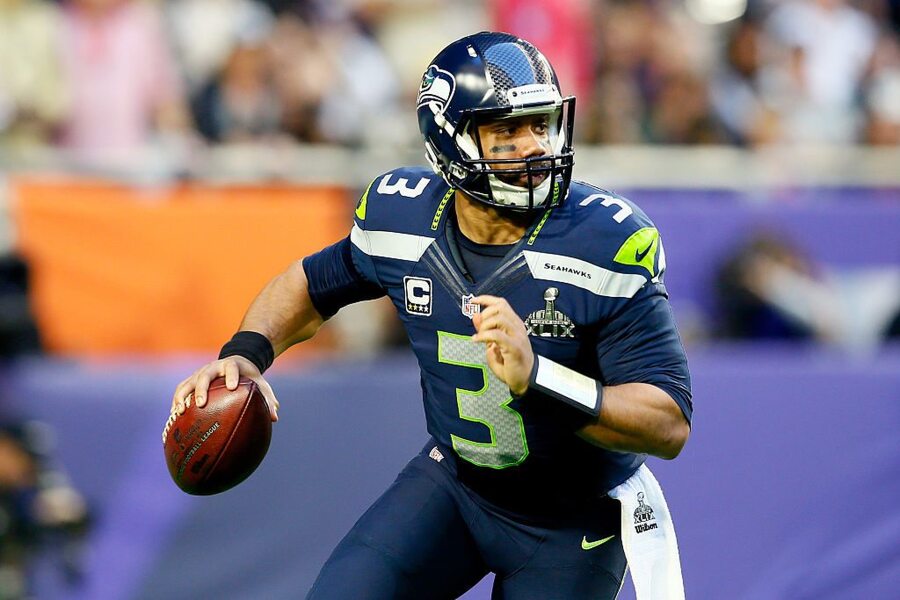 For 56 minutes, the New Orleans Saints had been playing their best ball of the season. They found themselves defending a third-and-13 against Detroit with just under four minutes to go. Then they gave up a short pass to Golden Tate that he ran 73 yards for a touchdown. The Saints got the ball back, and Drew Brees threw an interception that set the Lions up inside the red zone. When Detroit faced fourth-and-5, the Saints' Rafael Bush got called for pass interference against Reggie Bush, and the Lions had four more chances to convert; they did on third down via a Matt Stafford to Corey Fuller touchdown toss. New Orleans had one more opportunity, but turned the ball over on downs. And just like that, the Saints were dealt yet another heartbreaking loss on the road.

If you missed anything during the Titans/Redskins game, chances are you're like the rest of America in that you were doing something far more entertaining. It was just brutal to watch at times. At one point, Charlie Whitehurst threw an interception, and then on the very next play, Kirk Cousins responded with an interception of his own. He appropriately was benched in the second half.

The Bears are a maddeningly inconsistent team. One thing that has been consistent about them? They just cannot win at home. They dropped to 0-3 at Soldier Field this season, as the Dolphins embarrassed them, 27-14, in a game that shouldn't have even been that close. Jay Cutler was 21-34 for a paltry 190 yards, throwing one touchdown and an interception. He also lost a fumble, one of three Bears turnovers on the day.

If you want to see how to NOT win a football game, the Bengals put on a clinic for you. They held the ball for barely over 20 minutes, went three-and-out on their first eight possessions, allowed four sacks (including one on WR Mohamed Sanu), managed just eight first downs, finished with 135 total yards, and didn't score a single point. On the plus side, they did win the turnover battle, committing none, while Indianapolis had two.

Both Carolina's Luke Kuechly and the Colts' Erik Walden were ejected for making contact with an official, and will probably both receive fines, as well. While they each did technically deserve to be ejected, the rule of contacting an official resulting in an automatic ejection should be reviewed. In both cases, the offending player appeared to be removing themselves from a scuffle when the official intervened. Walden sort of swatted himself away and in doing so made contact with the official's arm, while Kuechly had already started walking away when a referee approached him from behind, and Kuechly swung his arms up to try and free himself from the grasp, thinking it was an opponent. Hopefully the NFL reviews these and doesn't fine either player.

On Monday night, the Texans gave up 24 unanswered points in less than three minutes. The barrage came courtesy of a three-and-out, a muffed kickoff return that the Texans recovered, only for Arian Foster to fumble on the very next play, and an interception from Ryan Fitzpatrick. Houston's defense is solid, but it's very difficult to defend when the opponent is starting drives already inside the red zone.

Most Interesting Stat From Week 7

The Bengals' Kevin Huber punted 11 times during Cincinnati's 27-0 loss to the Colts. 11 other games didn't even see 11 punts total.

Top Dogs: 59% of backers took the Saints, as they opened at +3 and closed at +1.5. Sadly, the 70% who grabbed them at the ML watched them implode on the road, as they so often do. Kansas City had 57% of bettors take the moneyline at +145, and they rejoiced as the Chiefs pulled off the 23-20 victory.

A very solid week overall, as the Colts and Cardinals both covered comfortably. The Jaguars not only covered at +6, they won by +4.5. My short-lived strategy of avoiding games Miami plays in should probably come back to fruition, as they once again did the opposite of what I predicted in beating the Bears 27-14. Week 8 looks absolutely miserable, though, with plenty of games featuring mediocre teams squaring off against each other.

The Texans' last two losses have been against these teams. I'm not impressed by Pittsburgh's Monday Night win over Houston, as I think that was mostly the Texans making some dumb mistakes. And Indy looks like one of the best three teams in football. I think they'll continue to roll on Sunday.

Atlanta's technically the home team here, but as this game is in London, neither team is really "home". Calvin Johnson might finally be coming back for the Lions, but even if he doesn't, a new offensive lineman gets hurt for the Falcons every week, and they already can't block anyone. Against the Lions defense, I don't see the Falcons scoring much more than the seven they did this past week against the Ravens. And I think Detroit is capable of scoring at least 13, which is all they'd need to cover. Tune into this game at 9:30am EST/6:30am PST Sunday. Or save your energy and sleep in. Whatever.

Yes, I know Cincinnati beat Baltimore in Week 1. But I also think these two teams are heading in opposite directions. The Ravens have looked great in their wins, and at least had chances to tie in both of their losses, while the Bengals have looked sloppy over the past few weeks, and will probably be without AJ Green again. I can't imagine this matchup being more than a one-score victory, and in tight games, I'm way more Wacco for Flacco than Faultin' for Dalton.

The Saints are on an incredible 19-game winning streak at home, but the Packers are also playing absurdly good football right now. Neither one of these teams can defend very well, so I'll take Green Bay's current juggernaut offense over the Saints' ghost of a juggernaut offense from a couple of years ago. Regardless, it should be a high-scoring Sunday night matchup, which means everyone wins!