Everything You Need To Know From Week 6 Of The NFL

Week 6 saw some history being made, as well as a few teams' watching their dominant runs come to an end. In case you missed anything, here are the highlights from the past 15 games.

16 minutes, three seconds. That's all the time Joe Flacco needed to throw five touchdowns against the Bucs. It's also the quickest amount of time anyone has ever reached five passing touchdowns in a game, by over 12 minutes. Alas, Flacco didn't keep up the pace of those first 16 minutes, which would have resulted in 18 touchdowns. To put his numbers in perspective, he had just seven touchdowns through the first five games of this season, and had a stretch of seven weeks during his 2012 Super Bowl winning campaign where he only threw four touchdowns total. Coming into Sunday, the Ravens had never scored more than 21 points in the first quarter in franchise history. They put 28 on the board in the first quarter, and cruised to a 48-17 victory.  Very impressive week for Baltimore.

Okay, the Dallas Cowboys are officially for real. They went into Seattle and became just the second team in 21 games to come away with a victory. And if not for a blocked kick and a muffed punt, the score wouldn't be as close as its 30-23 final. DeMarco Murray ran for 100+ yards for the sixth straight game, just the second person in NFL history to do that in the first six games of the season. The other? Jim Brown, back in 1958. Pretty fantastic company.

The Cleveland Browns were just 1-18 against Ben Roethlisberger prior to Sunday. 2-18 sounds so much better. Brian Hoyer's not quite ready to hand the reins over to Johnny Manziel just yet, though he only completed eight passes on the day. But the Browns ran the ball 38 times for 158 yards en route to an easy 31-10 win, despite having the ball for less than half the game.

Aaron Rodgers made a perfect fake spike as he drove the Packers downfield against the Dolphins. With time running out, Rodgers looked like he was going to clock it, then slipped the ball out to Davante Adams, who made it to the 4-yard line with six seconds left. Plenty of time for Rodgers to find Andrew Quarless in the endzone for a 27-24 win. It's the first time Rodgers has won in the state of Florida.

Derek Carr became the first Raiders quarterback ever to throw for four touchdowns in a game. He finished 18-34 for 282 yards, but threw a back-breaking interception when the Raiders were within tying field goal range at the end of the game. The joys of being a rookie, huh?

The Philadelphia Eagles put on a clinic for how to dominate a football game. Eight sacks and a fumble recovery, with several more pressures and deflected passes. The offense didn't look too shabby, either–LeSean McCoy finally broke the 100-yard mark, as he finished with 149 yards rushing. The Eagles recorded their first shutout in 18 years.

Only once in 49ers history has the team been down by double digits and ended up winning by more than 10. That was back in 1986. But now they can add a second win to that list. After falling behind 14-0 in the 1st quarter, San Francisco played a fantastic game and picked up a convincing 31-17 win. Colin Kaepernick finished with 380 total yards and three scores, and the Niners moved a half game up on the Seahawks for second place in the NFC West. 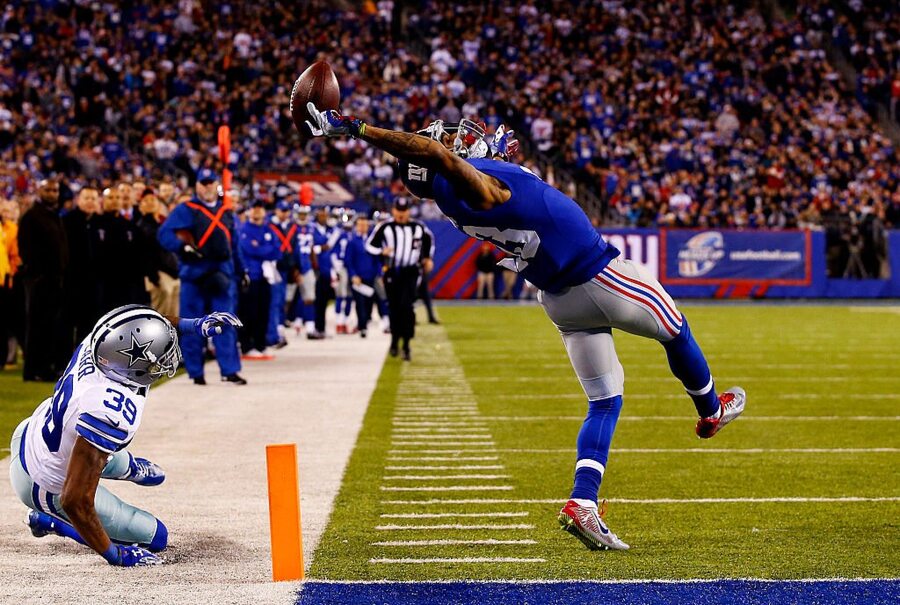 The Tampa Bay Buccaneers pulled off a stunner in Pittsburgh and looked competitive at New Orleans last week. That's why it's all the more disappointing that they put up such a stinker at home against the Ravens. Tampa Bay has now given up 204 points this year, for an average of 34 a game. Over the last four weeks? That average is at 41.25 points a game. Dreadful.

Flash back to when the Redskins had seven turnovers against the Giants Pretty sure everyone thought we wouldn't see a performance that abysmal again. Well, Washington may have outdone themselves: they committed four turnovers in the fourth quarter alone against the Cardinals. Arizona converted those turnovers into 10 points, and won by, you guessed it, 10 points. The NFC East is one of the more competitive divisions in football, but the Redskins aren't a part of that competition.

Andy Dalton threw two interceptions Sunday, after only tossing one all year. Of course, it's hard to blame him entirely for the loss, as Cincinnati still put up 37 points. What's more, Dalton only had one incomplete pass during overtime–and it was a throwaway. He moved the Bengals on their final possession into fairly easy field goal range to win the game at the end of overtime. However, Mike Nugent missed his 36-yarder, and the Bengals finished in a tie game for the second time this decade.

Remember how the Eagles looked great on Sunday Night Football? Well, the Giants looked just as bad. The team had 10 punts (one was partially blocked), the first time in 15 seasons they've punted double-digit times in the regular season. The quarterbacks were also sacked eight times en route to a 27-0 loss. Amazingly, the Giants have now been shut out three times in their past 20 games.

Eric Weddle has been in the league for eight years, but he might have just had the dumbest play of his career on Sunday. Facing a 4th and 35 from the Oakland 46-yard line, Weddle audibled into a fake punt, where he threw it toward the sideline. Forget that the pass sailed out of bounds…even a completed catch would have been about 15 yards short of a first down. Weddle even said after the game that it's the "stupidest play [I've] ever called." Well, that settles it, then: it was the dumbest play of his career.

Detroit Kicker Watch: The Lions put their third kicker of the year out on the field, in the form of Matt Prater. After the team went a combined 33% through their first five games, Prater stepped in and…went 1 for 3. The Lions are now 5 for 15 on field goals this season.

Most Interesting Stat of Week 5

The entire Panthers/Bengals game was filled with random stats that will really only be useful to dorks like myself, or if you're trying to win a bar bet. Not only was it the first tie since last year, it featured the longest play from scrimmage so far this season, when Giovanni Bernard took a run 89 yards to the house. Adam Jones also had a 97-yard kickoff that wasn't returned for a touchdown. The first drives for both the Panthers and Bengals took a combined 15 minutes and 39 seconds, while the next drives for each team took a combined 2:29. The Bengals had two drives that were made up of one play and a touchdown: Bernard's run, and Jeremy Hill's 3-yard dive following Jones's kickoff return. Cam Newton rushed for 107 yards on 17 carries after only running 14 times in his first four games. And both Graham Gano and Mike Nugent went 3 for 4 on field goals. Nugent's miss was a bit more memorable, though–he shanked his at the end of overtime.

There were two games where the favorite covered thanks to a pick six in the final 30 seconds: The Broncos' Aqib Talib helped the Broncos cover their -9.5 line, and the Cardinals' Rashad Johnson got an interception and returned it for a score to help Arizona cover at -5.5 over Washington.

Biggest Upset: 62% of backers took Cincinnati at -7. Unfortunately, a tie doesn't negate things. 52% of people took the Miami moneyline against Green Bay, and were looking great up until three seconds left in the game.

At this point, I'll take a 2-2 record in a week. The Pats looked shaky at times against the Bills, but ultimately covered easily, winning by 15. The Eagles did not look shaky whatsoever in a thorough trouncing of the Giants. Seattle was vulnerable at home and got knocked off by the Cowboys, and the Falcons looked like they were playing on the road, putting up just a paltry 13 points against a Bears defense that has given up some big plays this year.

Aside from a stumble in Week 2, Indy has been lights out at home. Of course, they haven't really played anyone, but still. Cincy will still be hurting with no AJ Green, and the Colts have had extra time to prepare. I think they roll at home.

I know picking a game including Miami will come back to bite me, but this is a brutal week, so why not? I can't figure either of these teams out, and I figure the Dolphins will still be drained from an emotional loss against Green Bay (and from that oppressive Miami heat). At least I sure hope so.

Does this pick terrify me? Absolutely. The Jaguars have looked terrible in nearly all of their games, and have only covered in one of them, against an equally bad Titans team. But I think Cleveland is going to be hurting from losing center Alex Mack to a broken leg. He's played over 4,500 straight snaps for them. Sure, a full week of reps will help whoever slides into the backup role, but he's also calling the line shifts. I think Cleveland wins, but I can definitely see Jacksonville picking up a late garbage time touchdown here to cover.

Don't let Oakland's cover this past week scare you–they always play San Diego tough at home. Something about that baseball field…Anyway, Zona is infinitely better with Carson Palmer back behind the helm, and even though they struggled against Washington, chalk that one up to rust. Both Michael Floyd and Larry Fitzgerald found the endzone for the first time in Week 6, and that should continue in Week 7. Cards win by double digits.