Everything You Need To Know From Week 5 Of The NFL

By Joey Held on October 6, 2014 in Articles › Celebrity News

15 games. Nine of them decided by one possession (and two more by 10 points). Aren't close games fun? In case you missed any of the action, here are the highlights from Week 5.

They've dueled each other countless times, and each of them reached a milestone during Week 5. Peyton Manning threw his 500th (and numbers 501, 502 and 503) touchdown en route to a career-high 479 passing yards. Then, during Sunday Night Football, Tom Brady made it to the 50,000-yard mark for his career, just the sixth quarterback to ever do that. Brady currently sits at 50,232 on the season. And just as importantly for them, each of their teams got big wins.

While we're on the topic of the record book, Demaryius Thomas had 141 yards and a TD in three games this year. On Sunday, he torched the Cardinals to the tune of 226 yards and two scores on eight catches. It's a franchise record for receiving yards, and a reminder that Thomas is one of the most dangerous receiving threats in the NFL.

The Browns have played four games this season, and the biggest margin of victory or defeat is three points. They've lost a pair of games by five combined points, and have now won two by a combined three points after the largest road comeback in NFL history. The Brownies scored 26 unanswered to sneak out a 29-28 win at Tennessee. Brian Hoyer threw for 292 yards and three touchdowns, while Travis Benjamin notched a season-high 48 receiving yards and two of those scores, including the game winner with 1:09 left.

Russell Wilson ran for 122 yards on 11 carries against the Redskins. Seven of those carries went for first downs, as the Seahawks grinded out a win. That's just the third time in history a quarterback has run for 100+ yards on Monday Night Football. Wilson only threw the ball 24 times, completing 18 passes for 201 yards, but he made a number of plays with his feet, avoiding sacks and scrambling all night long. He capped off a very nice performance by evading multiple defenders and somehow floating the ball over another to find Marshawn Lynch for the game-sealing first down. 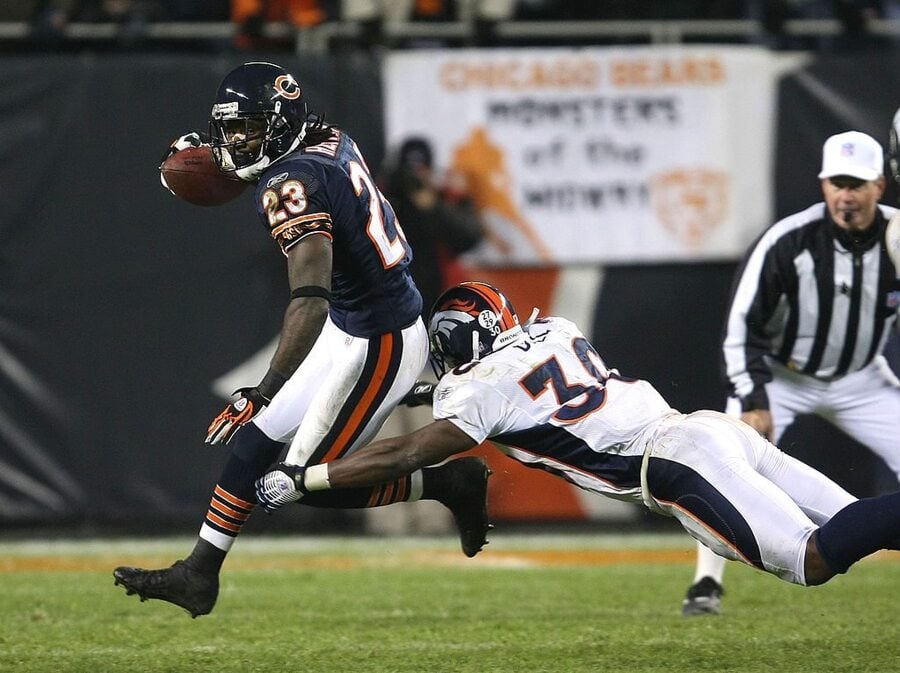 What are the odds that two of the best home run threats are on the same team? It's no secret what Devin Hester is capable of, but Falcons RB Antone Smith has been on a tear this year. The man has four touchdowns on just 17 touches, and has scored from 48, 38, 54 and 74 yards out. That's an average of 53.5 yards per touchdown. Insane.

Defenses and special teams had themselves a good time on Sunday. In all, they combined for seven touchdowns: Detroit's Rashean Mathis had a pick six against the Rams, while the Bucs' Danny Lansanah had one versus the Saints, and Pittsburgh's Brice McCain intercepted Jacksonville's Blake Bortles; Cedric Thornton also recovered an Austin Davis fumble in the endzone for the Eagles. On the special teams front, Philadelphia also got another touchdown when Johnny Hekker blocked a punt 23 seconds into that game that Chris Maragos returned for a touchdown, and Philly Brown had one of the weirdest punt returns for a touchdown you'll ever see–he was tackled while trying to field the punt, so there was a kick-catch interference penalty. But nobody picked up the ball, so Brown snatched it, got back on his feet, and ran 79 yards for the score. In nighttime action, Brandon Tate fumbled on kickoff return, which Kyle Arrington returned for the final defensive/special teams touchdown of the day.

This may be the only instance of a mascot making this section all year long, but Jaxon De Ville deserves it. The fluffy Jaguar, perhaps trying to divert attention from yet another pathetic on-field performance, held up a sign saying "Towels Carry Ebola," in reference to Pittsburgh's "terrible towels." Probably not the best idea to suggest your opponent is full of a disease that's killed thousands of people.

Congratulations, New York. You've made Joe Namath sad. The former Jets QB and Super Bowl Nostradamus tweeted the most disheartening thing while watching his team lose 31-0: "I'm watching the Jets play San Diego and it's no fun at all." It sure isn't, Joe. The Jets benched starter Geno Smith for Michael Vick at halftime, but clearly it did the offense no favors.

For a minute there, it looked like Tampa Bay might come up with yet another shocker on the road, this time in New Orleans. Alas, they did themselves in with silly penalties–the biggest coming from Johnthan Banks, who got an illegal hands to the face penalty after the Saints failed to convert a third down. That led to an automatic first down, which kept the drive alive and ultimately resulted in Khiry Robinson scoring a touchdown to eek out the victory for the Saints. The Bucs committed 15 penalties for 113 yards. For comparison's sake, New Orleans's other running back, Pierre Thomas netted 112 total yards by himself.

Sunday morning, Alex Henery was the kicker for the Detroit Lions. By Monday afternoon, he was already released, and the Lions have now let go of two kickers this season. Henery was 0 for 3 on attempts in the loss to the Bills. As you may have seen, Detroit only lost by three. One or two of those FGs may have helped. Henery went 1 for 5 during his two-week tenure, and the Lions are now a dreadful 4 for 12 on field goals on the season, good for just 33%. To add a cleated cherry on top, Bills kicker Dan Carpenter kicked a 58-yarder to give Buffalo the win.

Most Interesting Stat of Week 5

The teams from the AFC East were virtually devoid of any lead changes this week. The Bills only led for four seconds in their upset victory over the Lions, while the Patriots led 4:57 into the game and never looked back. Meanwhile, the Jets led for as many seconds as they had points: absolutely zero.

Top Dogs: Houston let down the 83% of bettors who picked them straight up, but rewarded the 52% who thought they'd cover what eventually grew to a -5 line. The Pats were the best moneyline dog, as 65% of bettors picked them to knock off the Bengals, which they did easily.

Biggest Upsets: 70% of bettors thought the Saints would cover at -11, but they barely even won the game outright. Detroit had 58% thinking they'd cover at -7, and 66% backing them on the ML, but they lost to Buffalo 17-14.

Last Week: Oh boy. This is two awful weeks in a row. The Cowboys, in traditional irritating fashion, came through with a win but no cover, while the Bears blew a 14-point lead to a Panthers team that was fielding an undrafted free agent as its starting running back. Meanwhile, this was another reminder not to bet on the Lions if Calvin Johnson is gimpy. Without Megatron, Matthew Stafford looks like a third-string quarterback, and the offense can't move at all. At least the Chiefs came through, holding the Niners to five field goals en route to a five point loss and cover.

Yes, the Giants have won three in a row. But they've beaten the Texans (who have defeated Washington, Oakland and Buffalo, hardly a murderer's row of opponents), the Redskins (who have only beaten Jacksonville), and Atlanta at home (who hasn't won on the road since Ronald Reagan was in office). Eli Manning should go back to "Turnover Eli" against a defense with 11 sacks, three interceptions and five fumble recoveries. And maybe Philly's offense can help the D and special teams out for once, too.

This is a huge spread, but Seattle is a different beast at home. And, oddly enough, this has the makings of a trap game for the Cowboys, with Dallas facing the Giants the following week. Their average margin of victory this year at home is 13 points, and that was against teams of a higher quality than the Cowboys.

I'm 0-5 in picking Buffalo games this year in my pick'em league, so you should avoid this selection like crazy. But there's a difference in demolishing arguably the best team through the first four weeks, and beating a Detroit team without Calvin Johnson and having a kicker that missed three kicks by a measly three points. I hardly think New England has righted the ship entirely, though they should be good enough to beat the Bills by more than a field goal.

Speaking of Detroit, they're an average team at best without Calvin Johnson, and now they might be sans Reggie Bush, too (meanwhile, Golden Tate is hobbled and Joique Bell is returning from a concussion). I'm aware the Vikings played really poorly on Thursday night. But I also don't put a ton of stock in Thursday night games. Teams are coming off a short week, and games get out of hand quickly. I'm also banking on Teddy Bridgewater coming back. He missed some throws in his lone start, but he's by far the best QB on the team, and the best chance for the Vikings to win. I picture this being a really low-scoring game in the 17-14 range. However, if Christian Ponder starts, disregard this entire section (other than it still being a low-scoring game).