Everything You Need To Know From Week 4 Of The NFL

Four weeks are in the book, and the only sure thing about the NFL is that nothing is certain. Teams we thought were good lost in embarrassing fashion, teams that looked dead in the water played inspired football, and…well, at least the Jaguars gave us some much needed normalcy.

A year ago, Steve Smith was the #1 receiver on the Panthers. On Sunday, Steve Smith Sr.–he had a son during the offseason–now a member of the Ravens, faced his old team. And vengeance was served, to the tune of seven catches, 139 receptions and two scores. Granted, one was off a tipped ball, but still a very impressive afternoon. Afterwards, the 35-year-old said he "ran around those boys like they were schoolyard kids." But hey, no hard feelings, right?

Sticking with the AFC North, Antonio Brown is having himself quite the season. The Steelers WR notched his fourth and fifth touchdown on the year (the second on an egregious offensive pass interference penalty that wasn't called), and finished with seven catches and 131 yards. Of course, unlike Baltimore, Pittsburgh wasn't able to get the W, as we'll see below.

What a difference a week (and a quarterback change) makes. After trailing 56-0 against the Falcons in Week 3, the Tampa Bay Bucs, led by Mike Glennon, stunned the Steelers in Pittsburgh. In the final minute of the game, Glennon connected with Louis Murphy for a 41-yard gain to get the Bucs to the Pittsburgh 5, where Glennon found Vincent Jackson for the go-ahead score and the 27-24 win. Even after just a miserable start to the season, Tampa Bay is only a game out of first place in the NFC South.

Two quarterbacks. They each wear #12. Both of them threw for 393 yards and four touchdowns in big road victories for their respective teams. Andrew Luck and Aaron Rodgers looked nearly invincible in leading the Colts and Packers to 2-2 records, which is just a game out of first place in both the AFC South and the NFC North.

Remember when people were questioning what was wrong with Jamaal Charles at the beginning of the season? Turns out the answer was "absolutely nothing". Charles came back from an ankle sprain in a big way, with 108 total yards and three scores. His backup, Knile Davis, totaled 119 yards himself, despite dropping a pass that would have led to an easy touchdown. At quarterback, Alex Smith easily outperformed Tom Brady, finishing 20-26 for 248 yards and three scores. 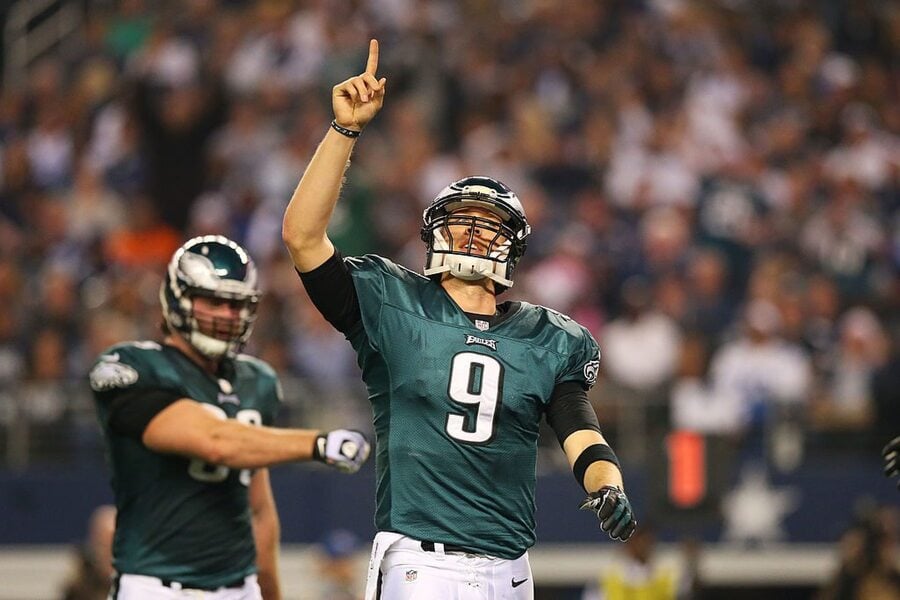 Philadelphia had been averaging 33.6 points per game coming into Sunday. Against the Niners, the offense got exactly zero of the team's 21 points. Nick Foles looked abysmal, throwing two interceptions, completing fewer than 50% of his passes and not even reaching 200 yards passing. LeSean McCoy wasn't much better, rushing 10 times for just 17 yards.

New England just looks flat out bad this year. After barely hanging on to beat the Raiders in Week 3, the Pats got crushed by the Chiefs on Monday Night Football. It's just the third time in Tom Brady's career that he's been down by at least 27 points; before he was pulled with about 10 minutes left in the game, the Patriots had only amassed 197 total yards on offense.

Through three weeks, the home teams during Thursday night games had just five turnovers. Kirk Cousins had five turnovers by himself Thursday against the Giants, and Logan Paulsen also coughed up the ball for Washington. Cousins didn't do his defense any favors with his porous ball handling–the average starting field position for the Giants after a Cousins turnover was Washington's 30-yard line.

Even across the world, the Oakland Raiders still struggle. High-profile offseason signing Maurice Jones-Drew ran twice for 1 yard–he's at 12 yards on 11 carries for the season, a blistering 1.1 yards per carry. Meanwhile, starting QB Derek Carr got knocked out of the game with both knee and ankle injuries, backup Matt McGloin threw two interceptions, and the Raiders have now lost 10 straight games dating back to last year. Someday London will get a quality NFL matchup. Someday.

Most Interesting Stat of Week 4

The Eagles led 21-10 with under a minute left in the first half before ultimately falling 26-21 to the Niners. Philadelphia blew a double-digit lead for their first loss this season, after having previously come back from double-digit deficits to win each of their first three games.

Biggest Upset: 64% of bettors took the moneyline at -240 on Atlanta, while 79% thought the Falcons would cover the spread, which closed at -6. Once again, Atlanta looked like a completely different team on the road, losing 41-28 to Minnesota.

Top Dog: Detroit closed at +1.5 against the Jets and +105 as the moneyline pick. Despite their history of road woes, the Lions were picked by 58% of bettors straight up, and 64% against the spread.

Last week: I didn't make any picks last week…or at least, I may as well not have. In my defense, the Philly line shifted to +5 and even +5.5 in some places, and I did predict that Miami would probably come out and win by about 25 (they won by 24). But all in all, it was an oh-fer in a forgettable week. So…let's forget about it. Time to bounce back!

Dallas has been showing up a lot here, and while I fully expect them to go back to their maddening inconsistency eventually, I don't think it happens here. This one has the potential to be a trap game, with Dallas visiting the Seahawks in Week 6, but they're a much better offense than Houston, and Arian Foster will probably be out, too. That only helps the Cowboys.

Detroit is quietly looking like one of the better teams in the NFL, particularly their defense. Meanwhile, the Bills, in "win now" mode for some reason, just benched EJ Manuel in favor of Kyle Orton. Orton's an upgrade, for sure, but against Detroit, on the road, in his first start with a new offense? I don't like his chances.

Fresh off a convincing Monday Night win, the Chiefs head to San Francisco to take on a Niners team that still hasn't looked great for much of the year. Getting over a touchdown feels like a gift, and San Fran may once again be without Vernon Davis.

The Bears have a dreadful run defense, but they're in luck, as the Panthers are virtually out of running backs. With DeAngelo Williams getting hurt yet again, Carolina is going to trot out the fearsome combo of Darrin Reaves and Tauren Poole. Cam Newton also hasn't looked like himself much this year, and while there's the small revenge factor at play for Greg Olsen against the Bears, he's been a Panther for multiple seasons. I'm sure any bad blood between him and Chicago is long gone. Injuries and suspensions to Carolina's D further back the case for Chicago to sneak one out against the Panthers.