Everything You Need To Know From Week 3 In The NFL

In the final week before the byes start, there were a number of nail biters, and an even larger number of beatdowns. With all the action going on, we're here to make sure you didn't miss anything.

The Matt Ryan to Julio Jones connection is absolutely scary. Ryan set a franchise record for completion percentage in a game, finishing at 87.5 percent (21 for 24, 286 yards and three scores). Nine of those completions, 161 of those yards and two of those touchdowns went to Jones. What's even scarier? The Falcons look like they've figured out how to use Devin Hester. Not only did he rush for a score, the former Bear and product of The U took back a punt for a touchdown, breaking Deion Sanders's record for most return touchdowns. Hester has the record all to himself now, with 20 such scores.

For the second week in a row, Mohamed Sanu successfully threw a pass for the Bengals. Last week, it was a gorgeous long bomb. This week against the Titans, it was a dangerous pass across the field to Andy Dalton, of all people. Despite the throw nearly being intercepted, Dalton corralled it and scampered in for a touchdown. It's the first receiving score for a QB in six years. Sanu is now 4-4 for 156 yards and 2 TD in his NFL career. That's good for a perfect 158.3 passer rating.

Everyone can use a little more salsa dancing in their lives. Victor Cruz finally got on track this year, finishing with five catches for 107 yards and a score. Rashad Jennings also put up big numbers, getting 176 yards on 34 carries while finding the end zone, as well. The Giants beat the Texans to earn their first win of the season.

Happiness is playing the Jacksonville Jaguars. The Colts won 44-17, and Andrew Luck was nearly perfect. He finished 31-39 for 370 yards and four touchdowns, and added 15 rushing yards to help out his fantasy owners a little more. The Colts defense was great, as well, racking up four sacks and two interceptions, one of which was returned for a touchdown. 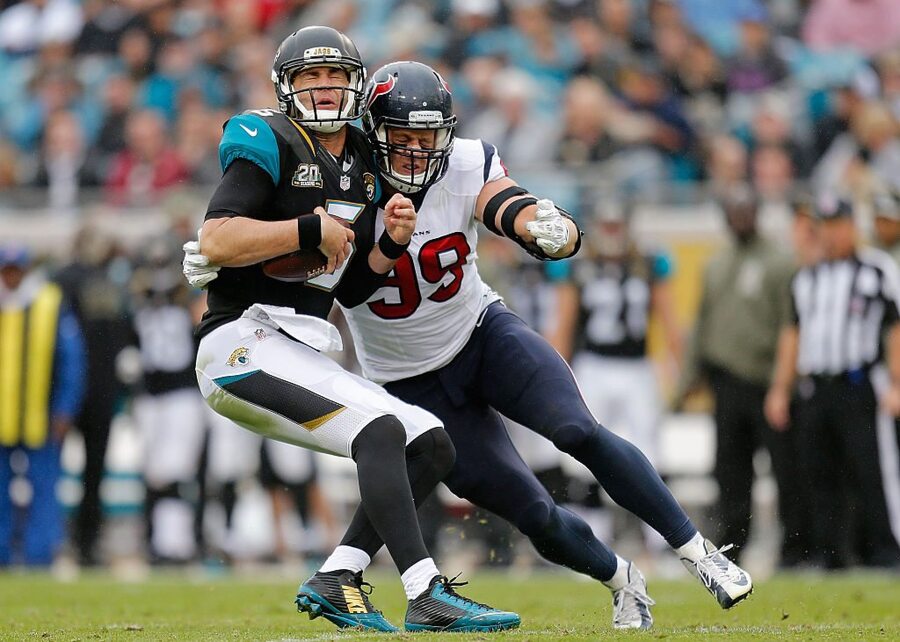 Joe McKnight of the Chiefs had played in just one game this year, recording exactly zero stats. That changed on Sunday, when the running back caught six passes for 64 yards and two touchdowns as the Chiefs eviscerated the Dolphins, 34-15. Will McKnight see a lot less action now that Jamaal Charles is due back from his injury? Probably, but for one week, he stepped up in a big way.

A week ago, the Steelers looked absolutely miserable on national television. This week, they ran all over the Panthers on national television. Maybe it's the whole Thursday night versus Sunday night thing. Both Le'Veon Bell and LeGarrette Blount bested the century mark, rushing for 147 and 118 yards, respectively. The pair combined for 8.5 ypc against a Carolina team that had previously only allowed 4.4 ypc to opposing running backs.

Whose Performance Deserves a "Needs Improvement"?

The Tampa Bay Bucs as a whole had a terrible week. After all, anytime you're down 56-0 in a game, something is not right. Evan Dietrich-Smith in particular would like to just forget about Week 3. The offensive lineman committed two stupid unsportsmanlike penalties–shoving one lineman's head into the ground, and later headbutting another. Dietrich-Smith was also playing center, which is not his typical position. It showed, as he snapped one ball over Mike Glennon's head (an impressive feat, as Glennon is 6'6″), and snapped another ball into his own butt.

In typical Giants fashion, they make both the good and bad sections. Once again, they shot themselves in the foot and kept points off the board. Larry Donnell fumbled within the 10 yard line, and there was a botched snap on a field goal that resulted in an unsuccessful try. Unlike the previous two weeks, their mistakes didn't come back to bite 'em, but New York needs to be a lot more disciplined and focused if they're going to build off this win.

State Farm claims it always pays to double check. But in Detroit's Stephen Tulloch's case, he probably should have opted for Allstate. Tulloch sacked Aaron Rodgers, then jumped up to do a discount double-check celebration, Rodgers's signature move from his line of State Farm commercials. Unfortunately, the linebacker didn't have the most graceful of landings, and tore his ACL as he came onto the ground. It brought back shades of Bill Gramatica doing the same thing after making a first-quarter kick. Maybe the NFL is onto something with trying to cut back on celebrations…

How quickly fortunes can change. After being the Week 2 hero with a game winner as time expired, Cleveland's Billy Cundiff missed a field goal against the Ravens and had another kick blocked. Considering the Browns lost 23-21, both of those were crucial misses.

Most Interesting Stat of Week 3

There were five safeties during Sunday's action alone. Two happened in the span of about two minutes: the Lions got two points by stuffing Eddie Lacy in the endzone, and the Bengals received a gift two when the Titans were called for holding in the end zone on a punt. Then, just for good measure, EJ Manuel got whistled for intentional grounding when he threw from the end zone, giving the Chargers two points. In the late afternoon, the Broncos got a safety against Marshawn Lynch, and the Dolphins recorded one by sacking Alex Smith in the end zone. The early afternoon teams that recorded a safety went 3-0, while the late afternoon teams went 0-2.

Top dog: A whopping 82% of the betting public thought Kansas City would win straight up (and at +210, why not?), while a healthy 60% thought they'd at least cover the +5.5 spread. They thrashed Miami 34-15 in getting their first win.

Biggest upset: 70% of bettors picked San Francisco to win straight up, while 77% thought they'd cover the 3-point spread against Arizona. Drew Stanton would have none of it, though, as he led the Cardinals to a 23-14 win.

Last week: The Bengals look like the most complete team in the NFL. Pretty sure I'm going to continue betting on them every time they're at home. The Bears defense of all things came up big in knocking off the Jets, and what would a Dallas Cowboys game be without a huge deficit, followed by a tense final few minutes? Meanwhile, the Panthers looked absolutely dreadful–I suppose when every single running back you have either gets hurt or was already inactive, it limits your offensive options. But kudos to the Steelers for actually being competent a week after barely showing up against the Ravens.

If this was still being played in the Hubert H. Humphrey Metrodome, Atlanta would be an easy pick. As it is, I'm going to chalk up Matt Ryan's terrible performance in Week 2 to a fantastic Bengals defense, rather than the game not being in a dome. Minnesota is a difficult team to read, and while I think they're in better shape with Teddy Bridgewater calling the shots, Atlanta is still the superior team overall.

I have a hunch that San Francisco isn't going to be very good this year. Vernon Davis might be out for this one, and when he's not on the field, Colin Kaepernick struggles. Meanwhile, Philly is 3-0 despite giving fans scares for large chunks of each of their games. They should keep things close, at the very least.

After Tampa Bay got shellacked by Atlanta last week, there are now three teams from Florida that we should never bet on. I'm thinking Oakland gets their first win of the season against a Miami team that looks like they've forgotten how to play football. So, naturally, the Dolphins will come out focused and win this one by about 25 points.

If Jerry Jones knows what's good for his team, he'll keep the roof open at Cowboys Stadium. Drew Brees tends to struggle in outdoor settings, but I trust his performances in primetime game: since Brees became a Saint in 2006, New Orleans is 11-4 in regular season Sunday Night games. Dallas is 12-16 during that same timeframe, and they're due for a letdown after a furious comeback this past week.