Everything You Need To Know From Week 2 Of The NFL

16 more games are in the bag, and the NFL seems to be as unpredictable as ever. Big name players got injured left and right, and a number of games came right down to the wire. We're here to make sure you didn't miss anything.

Who Earned Their Paycheck?

Kirk Cousins came in for relief after Robert Griffin III went down with a scary ankle injury. All Cousins did was fuel the fire in the debate over who should be starting for Washington: the Michigan State grad went 14-18 for 170 yards and a TD in the first half, and finished 22-33 for 250 yards and two scores in a absolute demolition of the Jaguars, 41-10.

The Patriots' Chandler Jones went into halftime with a bang. As the Vikings lined up for a field goal to cut New England's lead to seven, Jones not only blocked the kick, he scooped up the ball off one bounce, then pulled his best running back impression in sprinting for a 57-yard return touchdown. It was essentially a 10 point swing, and sent the Pats into the half with a convincing lead.

Jordy Nelson had himself a day: the Packers WR caught 9 passes for 209 yards, including the game-winning touchdown against the Jets. Green Bay struggled mightily with New York, starting off in a 21-3 hole. But time and again, Aaron Rodgers found Nelson, who had 60% of his team's receiving yards.

Last year, the Bears fully transformed from the Monsters of the Midway defense that had been so fearsome into something more like a Cuddly Puppy of the Midway. But with players like rookie safety Kyle Fuller, Chicago's D might just be returning. Fuller picked off two Colin Kaepernick passes, including one very impressive one-arm grab that he nearly returned for a touchdown. With CB Charles Tillman being placed on IR, Fuller will need to continue to make plays for the Bears defense.

The day of the fullback has returned! The often underlooked "other" backs found some paydirt: Detroit's Jed Collins and Washington's Darrel Young both caught touchdown passes in their respective games.

Not to be outdone, kick returners were in full force this week, as well. CJ Spiller took a kick 102 yards to the house, and Ted Ginn Jr. shook off a hit as soon as he caught a punt, before simply outrunning the entire Giants coverage team for a 71-yard return score. They're the first kickoff and punt return touchdowns of this young season.

Maybe incensed by those return touchdowns, some kickers had a fantastic week too. Dan Carpenter had five successful field goals for the Bills, and Buffalo's Justin Tucker, St. Louis's Greg Zuerlein, Arizona's Chandler Catanzaro and Dallas's Dan Bailey all had four successful field goals. Graham Gano also recovered a fumble in the Panthers' win over the Lions. Billy Cundiff had the game-winning field goal as the Browns shocked the Saints, and Cody Parkey nailed a 36-yarder as time expired to give the Eagles a victory in Indy. 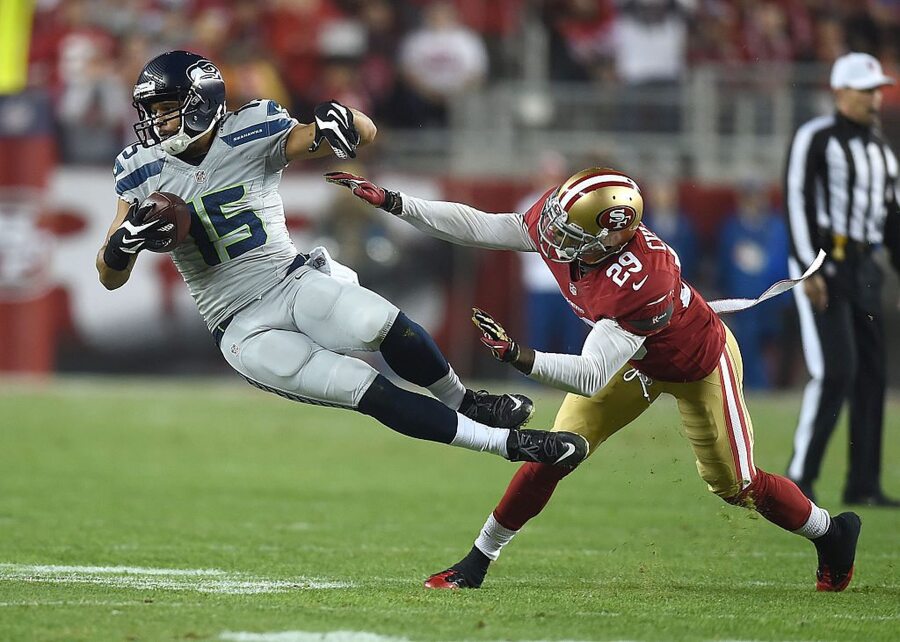 Whose Performance Deserves a "Needs Improvement"

Ben Roethlisberger had gone 30 straight games with at least one touchdown pass. That streak ended in a very poor Thursday night showing. Big Ben went just 22 for 37 for 217 yards and an interception, and the Steelers as a whole looked anemic. The curse of the Thursday night game lives on.

The Broncos hung on to beat the Chiefs, 24-17, though it shouldn't have even been that close. Demaryius Thomas had a long touchdown catch and run negated by right tackle Chris Clark being illegally downfield, and Aqib Talib had a pick-6 called back after Quanterus Smith got called for holding. Denver is going to score a lot of points this year anyway, but they need to stop with the silly penalties.

Matt Ryan was the best quarterback in the league last week. He had to travel to Cincinnati this week, though, and the results were not as pretty. Ryan averaged just 5.3 yards per attempt and threw three interceptions. Fortunately for him, he's got the Bucs next week, who suddenly look like one of the worst teams in the league.

Jacksonville looked really good in the first half of Week 1 against the Eagles. Since then, they have looked like…well, the Jaguars. Ryan Kerrigan had four sacks alone for Washington, and the Jags surrendered TEN sacks on the day. By comparison, Chad Henne completed only 14 passes all game. Jacksonville finished with 148 total yards on offense, while giving up 449 yards to a team playing a backup quarterback and missing one of their top receivers and tight end. Just incredibly bad.

While a few kickers were fantastic in Week 2, a couple others had a rough day: Cincinnati's Mike Nugent was just 1 for 4, Detroit's Nate Freese was 0 for 2, and Tampa Bay's Patrick Murray had a kick blocked. Punter, Spencer Hanning, who is probably most well known for getting kicked in the face on a punt return last week, received another vicious blow as he was sandwiched between two Saints players after a botched snap on an extra point. He walked it off like champ, though. Who says punters aren't tough?

The Cardinals are now 0 for 3 on 2-point conversions this year. But they're 2 for 2 in the only stat that really matters: wins.

Most Interesting Stat of Week 2

At various points during their games, the Cowboys faced a 3rd and 30, and the Dolphins had a 4th and 36. As you might have guessed, the Dallas didn't convert theirs, and Miami punted for a net gain of 44 yards. Barely even got it past the first down marker.

Top dog: Despite the team fielding an atrocious defense, bettors put their faith in the Cowboys against the Titans, and were rewarded handsomely: 66% of bettors took the Cowboys moneyline at +150, and 56% had them covering the +3.5 spread.

Biggest upset: 72% of bettors picked the Saints to beat the Rams straight up, and 75% picked them to cover the -6 spread. They did neither.

Last week: As predicted, the Saints struggled on the road, and blew a coverage at the worst possible time to give the Browns the victory. Despite using a backup quarterback, Arizona also covered and got a win against the Giants in a game that featured New York's Rashad Jennings falling down and fumbling with nobody touching him. Typical Giants. We'll just make a mental note to never pick teams for Florida: Miami and Jacksonville both put up stinkers in road losses.

The Bengals are absolutely unreal at home. Even if AJ Green doesn't suit up, expect Cincy to dish out a heavy dose of Gio Bernard and Jeremy Hill and control the game on the ground. And if Tennessee couldn't produce against the Cowboys defense, what chance do they have against one of the best units in the league?

Both of these teams are wildly unpredictable, but I think Chicago's best is better than New York's best. It's really a matter of a great offense versus a good defense, and a bad defense against a so-so (at best) offense that might be out their best receiver. Chicago is also more than capable of winning in a hostile environment, as they demonstrated Sunday night.

This is admittedly one of the most nerve-wracking picks I've ever had to make, but I think the Austin Davis train slows down a bit this week for the Rams. Despite their early season struggles, Dallas's offense is good enough to put up 25-30 points with regularity, which should be enough against St. Louis.