Everything You Need To Know From Week 15 Of The NFL

The Patriots, Broncos and Colts all clinched their respective divisions, while other teams saw their dreams of playing in the postseason disappear. In case you missed anything, we've got you covered.

It seems like an impossible feat, but the Buffalo Bills defense has now held Peyton Manning and Aaron Rodgers to zero combined touchdown passes in back-to-back weeks. They hounded Rodgers all day long, forcing him to a 34.3 QB rating, the worst he's ever posted as a starter. Bacarri Rambo had two interceptions, and Marcus Thigpen, who had been cut by Tampa Bay earlier this year, returned a punt 75 yards for Buffalo's only touchdown of the day. The Bills are technically still in the playoff race at 8-6, and may have to shut down another elite quarterback–Tom Brady in Week 17–for a shot at the postseason.

Odell Beckham Jr. missed four games to start the season, and he's already tied for eighth in touchdowns among all receivers. Everyone ahead of him has played at least three more games than he is. Sunday he was at his best, reeling in 12 catches for 143 yards and three scores. He caught 52% of Eli Manning's completions, and racked up 57% of Manning's yards. This is a lost season for New York, but if Victor Cruz can come back at anywhere near his healthy self, he and Beckham Jr. will be among the best receiving tandem in the NFL.

On the other side of the ball, Jason Pierre-Paul and Johnathan Hankins had 2.5 sacks apiece against the Redskins, and each forced a fumble, as well. Once again, the Giants have some great skill position players, and if they can rebuild their offensive line, they'll get back to their winning ways, which seems like forever ago.

When the Browns beat the Bengals 24-3 about a month ago, Cincinnati running back Jeremy Hill said the Brownies weren't a very good team. Seemed strange at the time, coming off a 21-point loss, but Hill is looking prophetic now. The Bengals pounded the Browns 30-0, and Hill totaled 148 rushing yards and two scores. He ran all over Cleveland's defense; in fact, the only time he was stopped was when he tried to jump into the stands after a touchdown, and a Browns fan stiff-armed his helmet, keeping Hill out of the crowd. No word yet if Cleveland has tried to sign that fan to a contract.

After watching his teammate Julio Jones rack up 259 yards last week before going out with a hip injury, Harry Douglas gave his best impression of Jones this week, grabbing 10 passes for 131 yards in a loss to the Steelers. Atlanta has some very quality position players, but thanks to injuries and an overwhelming lack of depth, they once again find themselves with a disappointing record.

Speaking of receivers going crazy, Dez Bryant just dominated Bradley Fletcher all night, snatching six balls for 114 yards and a career-high three touchdowns. The Cowboys built a 21-0 lead (and outgained the Eagles 167-0) before giving up 24 straight points. But Dez, Tony Romo, and DeMarco Murray–who scored a pair of touchdowns himself, while breaking his hand and continuing to play–answered and led the Cowboys to a 38-27 win.

The Saints took control of the NFC South–well, at least as much as a 6-8 team can "control" something–with a thorough domination of the Bears, 31-15. Drew Brees went 29-for-36 for 375 yards and three touchdowns, and New Orleans' defense shut down the Bears on offense, save for a pair of late touchdowns when the game was already out of reach. The Saints forced Jay Cutler to three seven interceptions (two to Pierre Warren), and sacked him seven times, including three by David Hawthorne and two by Junior Galette. 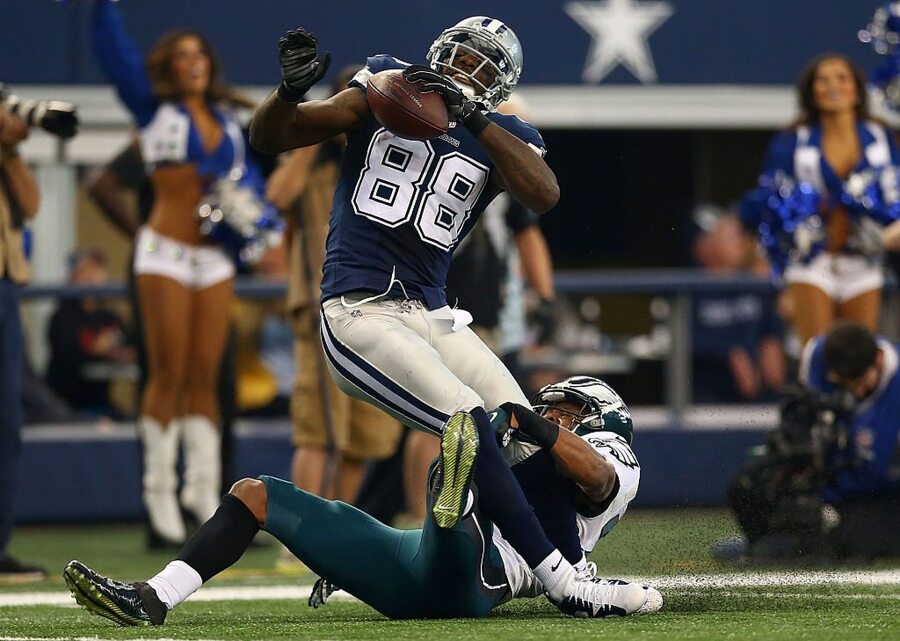 The Rams and Cardinals combined for 18 points, zero touchdowns, and about 43 seconds of watchable football on Thursday night. Thanks to another Arizona injury (this time to Drew Stanton), the Cards were forced to turn to fourth-string quarterback Ryan Lindley. And they still won. St. Louis didn't record a single first down in the third quarter, and coach Jeff Fisher curiously chose to kick a field goal on fourth-and-goal from about the six-inch line. Another example of playing not to lose, rather than playing to win. Though with how bad the Rams were, they didn't deserve to win.

It's Johnny Football! The long-awaited debut of the 2012 Heisman winner couldn't have gone worse. Manziel looked lost against the Bengals, throwing for just 80 yards and two interceptions, including one in the endzone. He was also sacked three times, and watched as numerous Bengal players flashed his trademark dollar sign in an intrastate mockery.

Tampa Bay has now lost to a Derek Anderson-led football team twice this season, as they fell to the once again Cam Newton-less Panthers 19-17. It's amazing how consistently close the Bucs come to almost winning games without actually winning them.

At the end of the first half in their game against the Giants, Robert Griffin III scrambled to his right and dove for the endzone. It looked like he had a touchdown to send the Redskins into the intermission up 17-7. But after review, the play was ruled as a fumble out of the endzone, so Washington ended with nothing. Santana Moss didn't take too kindly to that, and confronted head referee Jeff Triplette. That led to a pair of unsportsmanlike conduct penalties, resulting in the Giants beginning the second half kicking off from the Washington 35-yard line. Josh Brown did a little pooch punt that went about 20 yards, and New York recovered in excellent field position. Not a bad way to start the half. Of course, it's the Giants we're talking about here, so they gained a total of three yards and had to settle for a field goal from Brown.

With how much the Lions have struggled kicking the ball this season, it's only fitting that they'd win a game due to their opponent's kicking game going haywire. Detroit escaped with a 16-14 win over Minnesota, largely thanks to Blair Walsh going 0-for-3 on field goals. Walsh missed from 53 yards, had a 26-yarder blocked, and kicked a desperation field goal from 68 yards out at the end of the game. As you might have guessed, it fell short. Minnesota has now dropped to 3-4 in one possession games, all of which have come in their last eight contests.

Jordy Nelson is one of the most sure-handed receivers in the NFL, but one play from Sunday's loss to the Bills might haunt him all season. Nelson broke free on a slant-and-go route, and was wide open running down the field. All he needed was a perfect pass from Aaron Rodgers to hit him in stride. He got that pass, and…just dropped the ball. It's very likely Nelson would have scampered to a 94-yard touchdown, giving the Packers the lead. With the drop, the Packers ultimately had to punt, and as they didn't score the rest of the game, that was a very costly drop. If things break the wrong way, Green Bay could find itself on the outside of the playoffs looking in, with this loss being something they can point towards as a big reason why.

The 49ers and Seahawks have been the best rivalry in the NFL over the past few years, but we may have just seen the last of it for a while. The Niners once again got thoroughly outplayed by their opponent in a 17-7 loss, and probably won't have Jim Harbaugh to yell across the field at Pete Carroll next season. San Francisco now has only 23 points over its last three games, and lost both Frank Gore and Carlos Hyde to injuries as it was officially eliminated from playoff contention.

Josh Huff had a rough go of things Sunday night. The Eagles return man had some confusion with Brad Smith on the opening kickoff, then watched as the ball landed right between the two of them before being recovered by the Cowboys in what was essentially an onside kick to start the game. Later, Huff committed a penalty on a punt by running out of bounds on his own. The Cowboys were gifted an extra five yards, and eventually scored a touchdown on that drive, too.

Most Interesting Facts From Week 15

The 16-11 victory by the Jets over the Titans is the first time in NFL history that a game has ended in that score.

James Jones has now caught five touchdown passes for the Raiders this season. All but one of them didn't come in the final 1:42 of the game.

Jeremy Hill was the only player to break 100 yards rushing this week, with 148 total.

The Lions' Glover Quin has an interception in three straight games.

Top Dogs: On Thursday, 64% of backers believed in the Cardinals at a +220 ML, and they were painfully (if they watched the game) rewarded. 49% of bettors took the spread at +6, as well. In Sunday's action, the Cowboys were +150 ML and 3.5-point underdogs, yet rewarded 72% and 57% of bettors, respectively, with a win over the Eagles.

Biggest Upsets: Green Bay was heavily backed as a favorite, with 77% of the moneyline and 66% of bettors believing the Pack would cover the -5.5 line. They did neither. 61% of bettors felt the Ravens could cover at -14, and though they won straight up, they had a tougher time than expected with the Jaguars, only winning 20-12.

A unicorn sighting is more common than a winning week for me, so I don't even know how to feel just now. The Raiders (probably unsurprisingly) played like a team that realized they're in great shape for the #1 overall pick, while the Seahawks, Cowboys and Bengals all won in fairly convincing fashion. I'm feeling good about things, too, so for these last two weeks, let's give a writeup for four of the picks, and selections for the rest. We can turn this season around!

The Niners don't seem to be interested in playing quality football lately. The Chargers haven't looked great either, but I'm going to chalk that up to the quality of their competition. San Diego is also technically still in the playoff hunt, while San Francisco is not.

As mentioned earlier, Minnesota has played seven one-possession games in their last eight matchups. If this line was +7 I'd feel a lot more comfortable, but as it stands, I like the Vikings to keep things close. Yes, Miami is in desperation mode, but technically they've been there for about a month, and it hasn't really helped. They looked dreadful against the Patriots, who aren't the best defense around. Let's see if the stink continues for another week.

The last time I picked against the Texans when they were starting a backup quarterback and running back, they made me look silly. They'll have Arian Foster this time around, but they'll be starting rookie Tom Savage at QB, unless they make a free agent signing in the next few days. In that case, they'll be starting a quarterback that has known the Houston playbook for less than a week. Either way, I like Baltimore in this "loser goes home for real" game.

In what essentially boils down to a dead even matchup, would you rather have Big Ben throwing to Antonio Brown, Markus Wheaton and Martavis Bryant, or Alex Smith throwing five-yard outs to a receiving corps who still hasn't caught a touchdown pass? I'm choosing the former.