Everything You Need To Know From Week 14 Of The NFL

By Joey Held on December 8, 2014 in Articles › Celebrity News

As the weather gets colder, the sting of defeat gets just a little bit sharper. A number of first-place teams struggled mightily, while a few others pulled out some comeback wins. In case you missed anything, we've got you covered.

Cole Beasley caught three passes for 42 yards and two touchdowns in a 41-28 win against the Bears. All three grabs came within the Bears' two-yard line, and Beasley could have had a third touchdown if he would have turned around just a bit more quickly. Not bad for a guy with just one touchdown and only three games with three or more catches coming into Week 14. 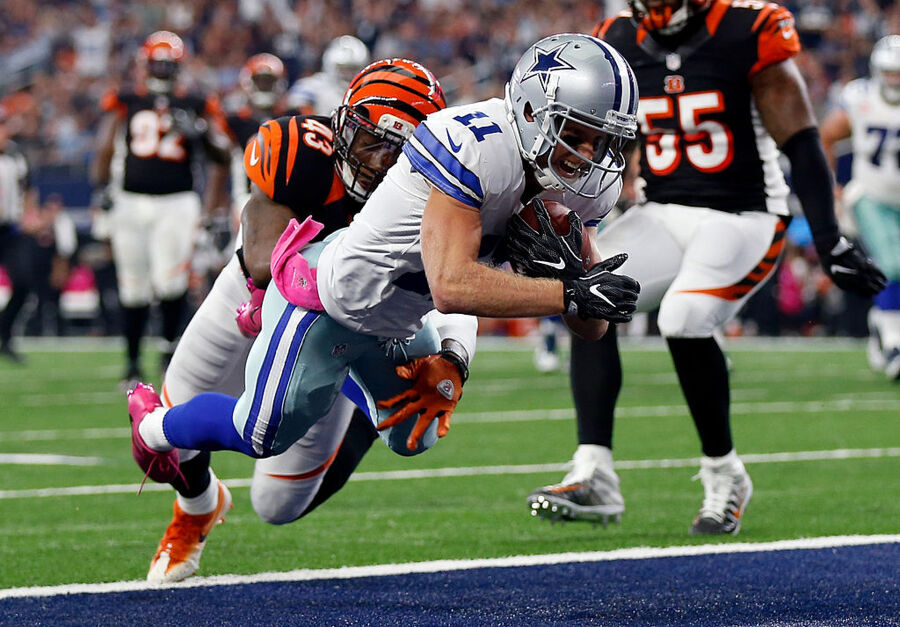 The Steelers dropped 25 points on the Bengals in the fourth quarter of a 42-21 win, including a winding touchdown run from Le'Veon Bell (his third of the game) and a 94-yard bomb from Ben Roethlisberger to Martavis Bryant. The win keeps the Steelers just a half game behind the Bengals in the AFC North.

Cleveland's defense gave Andrew Luck a heavy dose of putting him on his backside. They hit the Colts QB an outrageous 13 times, forcing a fumble in Indy's endzone (recovered by Cleveland's Craig Robertson), and picking off Luck twice, one of which was returned for a touchdown by Justin Gilbert. It's incredibly rare for a team to have a defense score twice and still lose the game, but that's exactly what happened to the Browns.

The Rams have won their last two games by a combined score of 76-0, after blanking the Redskins on Sunday. More comically, though, St. Louis sent out six captains for the coin toss: Stedman Bailey, Michael Brockers, Janoris Jenkins, Alec Ogletree, Greg Robinson and Zac Stacy. Those were the six players the Rams received from the 2012 Robert Griffin trade they made with Washington. As of now, it looks like the Rams made out like bandits.

Minnesota scored a touchdown on the first play from scrimmage, and they scored a touchdown on the last play from scrimmage. Gerald Hodges returned an errant throw from Geno Smith for a score to start the game, and Jarius Wright caught a bubble screen in overtime on third-and-five, which he then took 87 yards to the house. The Vikings have won both of their overtime games this year, and four of their last six overall. Nick Folk knocked in five field goals in the loss, and Percy Harvin added six catches for 124 yards and a touchdown against his former team.

In a battle of potential wild card teams, Baltimore's defense stepped up in a big way against the Dolphins. Baltimore didn't record a first down for 17 minutes, but the defense held strong, and played a big part in the Ravens' 28-13 win. Ryan Tannehill was sacked six times–Elvis Dumervil had 3.5 sacks himself for 25 yards, and also forced a fumble in the victory.

After a blocked punt left normal punter Mike Scifres sidelined with an injury, the Chargers' Nick Novak had to handle punting duties as well as kicking. His first couple of punts weren't very impressive, but considering these were his first punts since high school, they weren't bad, and he eventually reached over 50 yards on a punt, which would be pretty good for a full-time punter.

If Jordy Nelson and Julio Jones combined into one player Monday night–perhaps named Jorlio Jolson–they would have snagged 18 passes for 396 yards and three touchdowns. Just absurd performances from each team's #1 receiver.

With chances to all but put away the division against inferior foes, the Saints and Bengals came out firing and looked like teams really motivated to win. Haha, just kidding! Both of them gave up over 40 points in home losses. The Saints were down 41-3 to a Carolina team that hadn't scored more than 21 points in their last six games, which coincidentally were all losses. New Orleans is now 2-4 at home this year, which is remarkable when you consider that prior to this season they hadn't lost at the Superdome with Sean Payton at the helm in over two years. Meanwhile, Cincinnati lost to a division rival by 21 at home for the second time in a month.

The Rams' Greg Zuerlein missed an extra point, a 28-yard field goal, and a 38-yarder during a 24-0 win. Fortunately, it didn't cost his team the game, and Coach Jeff Fisher made Zuerlein kick a football into a locker to get back on track for next week. Nice.

Zuerlein wasn't the only kicker with PAT woes; Jay Feely and Mason Crosby also missed extra points. Three misses in one week is particularly impressive, as only four PATs had been missed prior to Week 14. And in just a wonderful microcosm of how the Bears' season has gone, both kickers they've used this year–Feely and Robbie Gould–have each missed an extra point.

If we don't see Johnny Manziel next week…well, that'll just be another confounding decision by the Browns, as their season slowly goes down the tank. Brian Hoyer, who hasn't broken 60 percent passing in his last four games and hasn't thrown a touchdown in his past three, continued to look absolutely brutal, finishing 14 for 31 for a meager 140 yards and two interceptions. What's worse, Cleveland still almost managed to win, so management will probably stick with Hoyer for another week. But at this point, it seems the Browns are winning or coming close in spite of Hoyer, not because of him.

Peyton Manning had 51 straight games with a touchdown throw. That streak came to an end on Sunday, on a surprisingly sunny and clear day in Denver. Manning threw for just 173 yards on 20 pass attempts while tossing two interceptions.. Fortunately for Manning, CJ Anderson saved the day, rushing for three touchdowns in a 24-17 win over the Bills.

Colin Kaepernick threw an interception on the first place from scrimmage, was sacked on the last play from scrimmage, and was pretty dreadful in between. The Niners QB managed just 174 yards on 18 for 33 passing, taking five sacks and throwing two interceptions compared to just one touchdown, as the Niners may have just thrown their playoff hopes away in a 24-13 loss to Oakland. Meanwhile, the Raiders may have just thrown away their sure shot at the first pick in next year's draft with the win.

Most Interesting Facts From Week 14

The Bears and Cowboys combined to go 5-for-5 on fourth downs during the first game of the week, and the Falcons and Packers went a combined 3-for-4 in the final game. The rest of the NFL managed 11-for-23.

Arian Foster now has 32 games with at least 100 yards rushing, which is the most for any undrafted player.

The Rams shut out their opponents in back-to-back weeks for the first time since 1945.

The Bengals/Steelers matchup featured an 81-yard touchdown grab from AJ Green, as well as a 94-yard touchdown catch by Martavis Bryant, marking the first time all year both teams in a game had touchdown throws of 80 yards or more..

13 games into the season and a Kansas City wide receiver still hasn't caught a touchdown.

Le'Veon Bell became just the sixth player in NFL history with three straight games of 200 or more all-purpose yards, and Eddie Lacy set a franchise single-season record with his sixth straight game with 100+ yards from scrimmage.

The Patriots' Brandon Browner has committed 11 penalties in seven games. Bill Belichick is probably livid on the inside.

15 teams who currently aren't in first place in their division would be in first or tied for first if they were in the NFC South, including the entire NFC North, NFC West and AFC North.

Biggest Upsets: With 68% of bettors thinking they'd cover the -9 spread, the Saints were a popular selection. But, um…that didn't end up working out. The NFC South has to be the most unpredictable division in football–the only thing consistent about it is how inconsistent its teams are.

The Vikings' made me sweat, allowing the Jets to creep back into the game before winning in overtime, and the Rams took care of business in convincing fashion against Washington. On the losing side, the Bengals just decided to stop playing in the fourth quarter, and the Bucs couldn't get a garbage time touchdown to cover. No worries, though, a 2-2 week is the best I've done in a month. Let's ride that momentum!

I would be absolutely terrified to play Seattle right now. The Niners got blown out at home over Thanksgiving, then bounced back with an equally uninspired loss to the Raiders. I think the Seahawks smell blood in this game and just trounce San Francisco. Pete Carroll and company would love nothing more than to eliminate their division rival from the playoffs.

Speaking of division rivals, the loser of this game could very likely finish 11-5 and still miss the playoffs. Like San Francisco, Dallas got thumped in a home Thanksgiving loss the first time these two teams played. I think the rematch is different, though, for a pair of reasons: Dallas is 6-0 on the road, and every time a team has played Seattle since Week 7, they've lost their next game. You may recall Philly just played the Seahawks this week.

The Raiders beat the Chiefs straight up on a Thursday night game in the first meeting. I don't think that happens here, but I do know the Chiefs are 0-3 in their last three ATS, and the Raiders are 3-1 in their last four, including two straight up wins. Kansas City is playing poorly enough right now that it shouldn't be favored by double digits over anybody.

Looks like I'm only going the divisional battles this week. The Bengals got throttled 24-3 at home on a Thursday night game (another theme), but good news, everyone! This isn't a primetime game, so we shouldn't have a Terrible Andy Dalton sighting. I'm banking on the revenge factor being in Cincinnati's favor.