Everything You Need To Know From Week 13 Of The NFL

By Joey Held on December 2, 2014 in Articles › Celebrity News

No catches that broke Twitter this week, but still plenty of action as we head into the final month of the NFL's regular season. In case you missed anything, we've got you covered.

Late game heroics were all over the place on Sunday. Philip Rivers found Eddie Royal on a short pass to put the Chargers up by one over the Ravens with under a minute to go. Meanwhile, in the Blue Ribbon Participation Bowl, Blake Bortles drove 55 yards in 11 plays and about three minutes to set up Josh Scobee's 43-yard field goal, and the Jaguars bested the Giants, 25-24. Then, on Monday Night Football, Ryan Tannehill overcame some very sloppy play from virtually everyone involved in the game, and led a drive that ended in a field goal with under two minutes to go, and a win after Geno Smith threw a perfect "well, it's the Jets…are you really surprised that happened?" interception to seal the Dolphins' win.

The third options in several teams' passing games played very well Sunday: Kenny Stills snagged five passes for 162 yards and a score in the Saints' win, Indy's Donte Moncrieff nabbed three balls for 134 yards and two touchdowns, Davante Adams chipped in six catches for 121 yards in a Green Bay win (though he did drop a sure touchdown that would have clinched the game), Harry Douglas had nine catches for 116 yards filling in for Roddy White, and Stedman Bailey caught five passes for 100 yards in the Rams' shellacking of the Raiders.

This'll segue nicely, because my goodness, the Rams looked fantastic against Oakland. They won 52-0, thanks to 164 total yards and three touchdowns from Tre Mason (two rushing, one receiving). Meanwhile, the Rams' D held the Raiders to just 4 of 18 on third downs while forcing five turnovers.

It's rare enough for a team to block one punt in a game, let alone two. And to return both of those punts for touchdowns? Well, that happens just once in a blue moon. More specifically, it's only occurred five times in NFL history, and hadn't happened since 1990. The Vikings' Adam Thielen and Everson Griffen each returned a blocked punt for a touchdown in a 31-13 win. In fact, Minnesota hadn't returned a blocked punt for a score since 1986. Good time to break that spell. Much like St. Louis, Minny's a lot tougher than their 5-7 record might indicate.

The bell tolls for thee–or in this case, the Bells. On Thanksgiving Day, Joique racked up 91 rushing yards and two scores, both season highs. Then on Sunday, Le'Veon touched the ball 29 times for an incredible 254 yards. Sure, some of the receiving yardage was when the game was already out of reach, but that's still mighty impressive.

J.J. Watt has been making a habit of showing up in this section. With his third receiving touchdown of the season on Sunday, Watt now has five total. That's the first time in SEVENTY YEARS a defensive end has recorded five touchdowns in a season. And he looks slightly less intimidating than normal in that Verizon commercial he stars in, so give him some credit for nice acting chops, too.

Sticking with the Texans, Ryan Fitzpatrick was benched a few weeks ago, but was forced back into starting duty thanks to a season-ending injury to Ryan Mallett. How did Fitzpatrick respond? By going 24-33 for 358 yards and tossing six touchdowns. DeAndre Hopkins caught the brunt of Fitzpatrick's yardage, securing all nine targets for 238 yards and two scores. The six passing touchdowns were more than half of what Fitzpatrick had totaled in nine games earlier this season. After the game, Fitzpatrick–who attended Harvard–brought his young son into the press conference to quickly multiply the numbers 93 and 97 together in his head. A very solid all-around family performance.

Let's hear it for garbage time! Even with their respective games out of reach, a few players picked up some late points and probably swung a few fantasy games in the process. Antonio Brown caught two touchdowns in the final 2:34 of the Steelers' loss to the Saints; Jake Locker found Nate Washington to bring Tennessee within 24 with 1:06 left; the Cardinals' Stepfan Taylor caught a touchdown pass and a two-point conversion with 1:05 remaining; Buffalo's Dan Carpenter kicked a 35-yard field goal with his team UP by 13. There's gotta be a different term than garbage time for that. Maybe sanitation time or something. 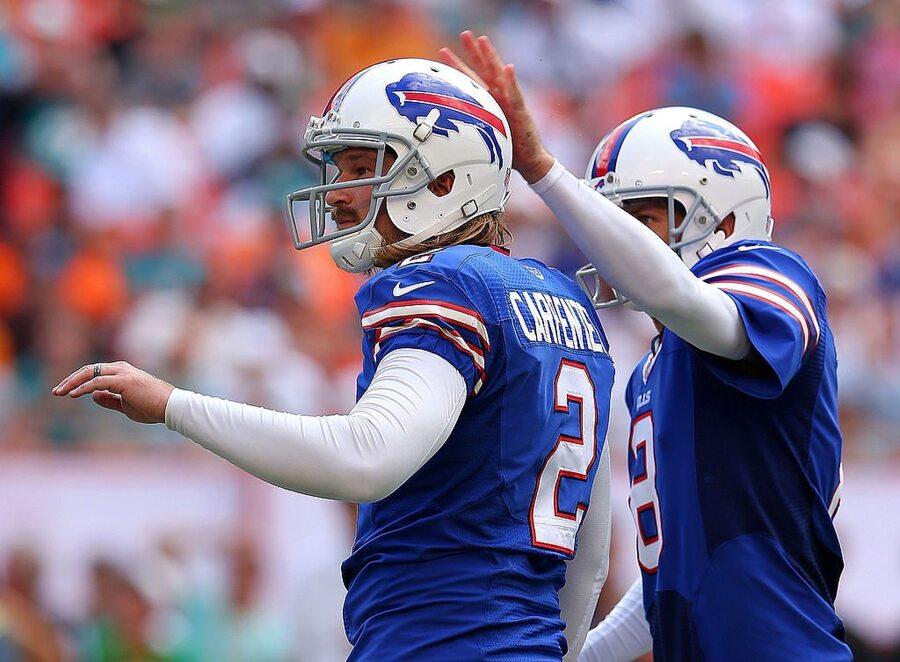 Last week the AFC North was in the discussion for best conference in the NFL. It still is up there, but it was absolutely putrid on Sunday. Cleveland got crushed by Buffalo 26-10 in a game with major wild card implications, and we also may have seen the turning of the leaf from Brian Hoyer to Johnny Manziel. Pittsburgh couldn't handle New Orleans, who looked like the 2009 version of themselves–while the Steelers only lost by three, this game wasn't close at all. Baltimore had a 10-point lead with less than four minutes to go and ended up losing to San Diego. The lone victor, Cincinnati, had to brace itself against another three-interception game for Andy Dalton, barely sneaking out a 14-13 win over Tampa Bay.

How did Cincinnati manage to pull out the win? Why, they were playing the Bucs, of course. Tampa Bay has shot itself in the foot a number of times this season, but this may have been the most painful way yet. After starting from their own 20 on a two-minute drill, Tampa Bay moved into field goal range when Josh McCown completed a pass to Louis Murphy at the Cincy 20-yard line. Slight problem, though: the Bucs had 12 men on the field. It's incredibly rare to see that called on the offensive team, and it bumped Tampa Bay out of field goal range entirely. They eventually turned the ball over on downs with a second remaining, and fell to 0-6 at home.

The New York Football Giants were ahead of the Jaguars 21-0 in the first half. Finally, it looked like they'd get off the schneid after dropping six straight. Instead, it was loss number seven in a row, as Jacksonville came back for their second win of the season. Eli Manning fumbled twice, and Larry Donnell lost a fumble that was returned for a touchdown. At this point, the Giants might be better off tanking the rest of their games.

Andrew Luck fumbled a couple of times early last week, and one-upped himself this time around. His first dropback resulted in a sack and lost fumble. His second dropback ended up being intercepted. Of course, the Colts once again won by 20+ points, but that's in large part because they played the Jaguars and the Redskins. The slow starts Luck has been having lately might not be as easy to overcome against a quality opponent. Or even an average one.

If not for their garbage time touchdown, the Cardinals' offense would have scored a grand total of six points in their last two games. The once strong hold they had on the NFC West is fading fast. At 9-3, they're now just a game ahead of the Seahawks in their division, and have the Cowboys and Lions breathing down their necks as possible wild card usurpers should Arizona blow the division lead.

Kansas City ran nine plays in the first quarter of their loss against the Broncos, for a remarkable -10 yards. Alex Smith also threw an interception off a tipped pass (in between running for his life all night), Donnie Avery fumbled the ball after it hit a defender's helmet while he was running, and a Broncos punt bounced off the knee of Marcus Cooper, who was simply trying to block downfield. Just imagine every possible thing that could go wrong in a football game–they all happened to the Chiefs at some point Sunday night.

Most Interesting Facts From Week 13

Since Drew Brees has joined the Saints, they're now 21-2 when he throws at least four touchdown passes.

When Adam Thielen blocked a punt and returned it for the Vikings, it was the first time in 2,152 punts that a Minnesota player scored on a blocked punt.

This was the first time all year (10 appearances total) that Blake Bortles didn't throw an interception.

Matt Schaub has now thrown 10 passes this season for the Raiders and has committed three turnovers, including a pick-six.

Tampa Bay is the only team in the NFL without a home victory.

The Bengals have won three games in a row on the road for the first time in franchise history.

There were three matchups decided by one point exactly during Week 13, bringing the season total to eight.

Top Dogs: Seattle ended up as 1.5-point underdogs, and had 51% of ATS support alongside 58% of SU support, at +110 odds. For non-Thanksgiving games, San Diego's late-game heroics made 42% of bettors who nabbed them as anywhere from 4 to 6.5-point underdogs happy, and made 61% of folks who grabbed them at +220 odds to win straight up QUITE happy.

Well, that's the last time I put all my eggs in the AFC North basket. Pittsburgh got thoroughly outplayed by the Saints, and Cincinnati spotted the Bucs ten points before coming back for a straight up win but non-cover. And a week after giving up a garbage time touchdown to blow the cover, the Chargers infuriate me yet again with a late score to win and cover this week. Earlier in the week, the Bears looked like they'd start things off well, going up 14-3, but collapsed the rest of the way. Obviously, it was a sign of things to come. Onto the next week. As always, follow these at your own peril/bet against these at your own success.

Even though they nearly scraped out a win on Monday Night Football, the Jets didn't look impressive at all. Meanwhile, Minnesota has been quietly playing some really solid football over the past six weeks, and I like them to keep rolling here.

The old saying is that no team is as good as its best performance or as bad as its worst. Do I expect Washington to lose by 22 or the Rams to win by 52? Absolutely not. But do I expect St. Louis to win by at least a field goal? You betcha.

This is a matchup I have no idea about, so why not pick it? Both teams have looked great and miserable, oftentimes in the same game. I'm going to chalk Andy Dalton's poor performance this week up to developing a flu the night before. He should bounce back at home in a game that each of these teams really needs to win.

Tampa Bay is eerily adept at shooting themselves in the foot–no one's doubting that. But they've only been blown out in two games, and have kept things within one score in seven of their 10 losses. Now they're getting nearly double digits against a Detroit team that did play well on Thanksgiving, but still hasn't looked great lately. I like those odds.