Everything You Need To Know From Week 11 Of The NFL

Several first place teams looked dreadful, and teams otherwise left for dead looked fantastic. Along the way, a few players put up massive stats. In case you missed anything, here are the highlights from Week 11.

The St. Louis Rams are the only team in the league who have beaten both Super Bowl participants from last year. The last-place team in the NFC West has now defeated San Francisco on the road and Seattle and Denver at home, yet is 1-6 versus the rest of their schedule. The win against Denver may be the most impressive one yet. Alec Ogletree led the Rams with 10 tackles and an interception (one of two on the day for St. Louis), and Denver, who came in averaging 31.8 points per game, managed just one score. Kenny Britt had four grabs for 128 yards and a touchdown, and Greg Zuerlein added five field goals for a 22-7 Rams win. Equally impressive: quarterback Shaun Hill caught his own pass after it deflected off two separate players, and scampered a few yards to get back to the original line of scrimmage.

Andy Dalton certainly looks good when he's not playing in primetime. Just 10 days removed from quite possibly the worst performance by a quarterback this century, Dalton completed nearly 73% of his passes, finishing with 220 yards and three touchdowns. It certainly helps having AJ Green back and healthy–he caught six passes for 127 yards and one of the scores, and Jeremy Hill added 152 on the ground. Meanwhile, Cincy's defense, who couldn't slow down a turtle over the past month, held the Saints offense to 330 total yards and 10 points.

J.J. Watt now has four touchdowns, two of them on offense. This most recent one was on a fade to the corner from rookie quarterback Ryan Mallett. Watt channeled his inner Calvin Johnson and made a ridiculous back shoulder catch. He added four tackles and a sack, and probably rescued a cat from a tree on the way to the game, as well.

Mike Evans became the first 200-yard receiver since Week 6, and the first wide receiver since Randy Moss in 1998 to post three straight games with 100+ yards and a touchdown. The rookie snagged seven passes for 209 yards and two touchdowns, and Tampa Bay forced three turnovers (including a Jonathan Banks pick-six) in a 27-7 rout of Washington.

If you only compared point totals, it'd look like Green Bay had a slight regression compared to last week's 55-14 drubbing of the Bears. The Packers only won by 33 in a 53-20 demolition of the Eagles. Philly came into the week with nine defense and special teams touchdowns on the season, so naturally Green Bay scored three of their own: a Micah Hyde punt return, a Julius Peppers pick-six, and a Casey Hayward scoop and score off a Mark Sanchez fumble (though unfortunately it was off a high snap, and not a butt fumble). Of course, the Eagles still made a couple of great special teams plays, blocking a pair of Mason Crosby kicks.

For folks who like watching people run with the football, the Seahawks and Chiefs gave you quite the entertaining contest. The two teams combined for 394 rushing yards, and Kansas City held Seattle on three separate fourth-down attempts in the fourth quarter, squeaking out the 24-20 win.

Revenge never felt so good. Drew Stanton took the helm for the Cardinals, and led his squad to a 14-6 victory against his former team. Stanton went 21 for 32 for 306 yards and two scores, and Arizona's defense once again looked incredible, piling up four sacks and an interception while beating up Matthew Stafford all day.

It's only fitting that the top rushing performance in this unpredictable season came from a guy that nobody could predict doing it. New England's Jonas Gray previously had 131 yards on 32 carries all year, and ran all over the Colts to the tune of 199 yards and a franchise-record four touchdowns, on 38 carries. Even with the high volume, Gray still averaged over five yards a carry. For comparison's sake, he scored as many rushing touchdowns as the rest of the NFL combined, and he finished with more rushing yards than eight different starting quarterbacks had passing yards on Sunday.

Then Le'Veon Bell ran for 204 yards against the Titans. He's not impressed by your nearly-200 efforts. 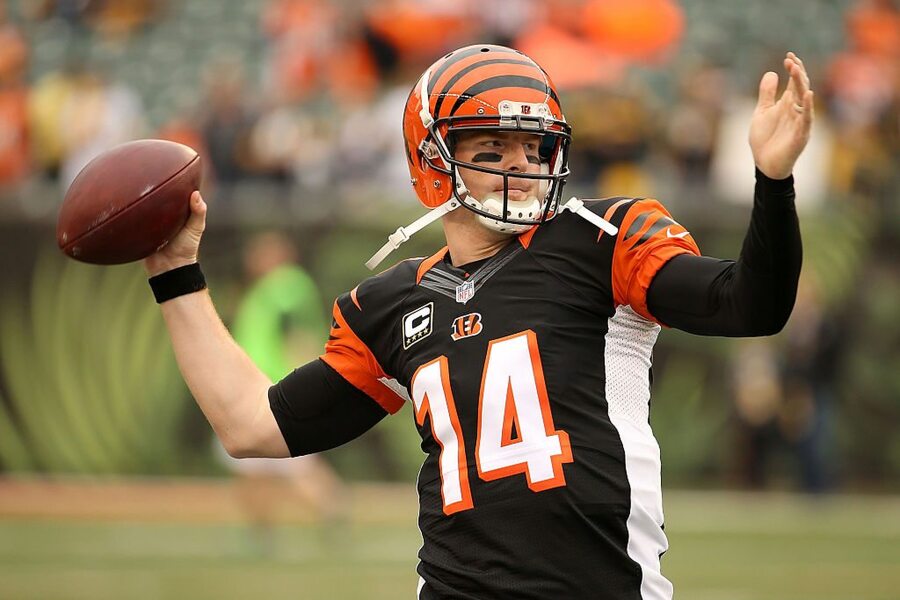 The entire Washington Redskins team looked outmatched, which is especially disappointing coming off a bye. The offensive line allowed six sacks, Robert Griffin threw two picks, Roy Helu Jr. lost a fumble, and Kai Forbath, who was 15-for-16 coming into the day, missed two field goals in the loss to the Bucs.

There's the Eli we know and love! Unless you're a Giants fan. Then it's probably more "know and hate". The younger Manning threw five interceptions in a 16-10 loss to the Niners. Manning and Colin Kaepernick combined to complete just 50% of their passes, the two teams went 0-for-4 on fourth downs, fumbled four times, and averaged a measly 5.8 yards per pass and 3.6 yards per rush.

Not to be outdone in the "Bad Offense Bowl", Philip Rivers threw a 22-yard touchdown to Malcom Floyd on the third play from scrimmage. Neither the Chargers nor the Raiders found the endzone again. That was largely due to a combined 7-for-30 on third downs, as well as just 180 passing yards for Rivers and 162 from Derek Carr.

The Browns realized they were in first place entering Sunday, and collectively, the team said "nah, we're good." Losing 23-7 at home to a rookie QB in his NFL debut and a backup running back making just his second start is really bad. Brian Hoyer threw an interception and completed under 50% of his passes. Welcome back to low expectations, Cleveland.

Let's all give one big collective shake of the head toward the NFC South. Atlanta snuck out a 19-17 win in Carolina, improving to 4-6 and moving to first place in the division. Keep in mind they're 0-6 when not playing their fellow division rivals. Carolina has lost five in a row and is half a game back. Tampa Bay just won their second game (in Week 11!) and is only two games back.

Most Interesting Stats From Week 11

Prior to Week 11, only six running backs had surpassed 150 yards in a game. Five of them reached that milestone this week. Le'Veon Bell (204 and a score) Jonas Gray (199 and four touchdowns) Jamaal Charles (159 and two scores), Alfred Blue (156), and Jeremy Hill (152) all broke the century-and-a-half mark.

San Francisco possessed the ball for exactly 35 minutes, leaving 25 on the nose for the Giants. Such precision!

The Raiders have a losing streak equal to a full season of football, going 0-16 in their last 16 games. It's been over a year since they've won a regular-season game.

Six teams scored single-digit points in Week 11. For comparison's sake, only 20 teams didn't reach double digits over the first 10 weeks. Taking away Washington and Oakland (a combined 3-15 prior), the four other teams that scored nine or fewer–Buffalo, Cleveland, Denver and Detroit–were 25-11 heading into the week.

Top Dogs: 71% of bettors grabbed Tampa Bay at +250 on the moneyline and were rewarded in a big way, as Tampa pulled off the 27-7 upset over Washington. Meanwhile, 57% took New England as +3 underdogs against the Colts.

Great grind-it-out win for Arizona for my lone win this past week. At this point, I'm running out of excuses. But that won't stop me from giving some: I momentarily forgot the Browns were located in Cleveland, who seems doomed to sports suffering. Julius Thomas, Montee Ball and Emmanuel Sanders all got hurt–taking away about half of the Broncos offensive attack. Pittsburgh nearly blew another game against a bad team, but survived to at least beat Tennessee, albeit without covering. Good thing I don't do this for a living.

This seems way too obvious, so I'm sure I'll be wrong about it. Dallas is coming off a bye, the Giants are coming off five straight losses. I don't think home field advantage should make too much of a difference here.

You want to go against the Patriots? Be my guest. Detroit hasn't looked strong for nearly a month. I think this is the week they finally pay for it.

Two strong defenses face off against each other, so this is more a question of which QB will implode? My money's on Ryan Mallett, though you can never truly feel good about backing Andy Dalton. Jeremy Hill has averaged 153 rushing yards against teams from the AFC or NFC South over the last three weeks (that's a convoluted way of saying he torched Jacksonville and New Orleans), so hopefully he can keep it going.

I'm basing this solely off the fact that the Chargers currently aren't a good team. That means the Rams probably won't show up to play them.