The Economic Impact Of Picking Up That Controversial Flag In the Cowboys Vs. Lions Game

Everyone seems to be talking about the controversial penalty turned non-penalty that occurred in the Wild Card Round of the NFL Playoffs between the Dallas Cowboys and the Detroit Lions. Arguing whether or not the play should have resulted in a pass interference call has surely been played out by the sports media. Some have drawn attention to the point that these all-star officiating crews are reestablished for the playoffs and are not used to working together. Perhaps we should be looking further into the economic impact this play may have on the playoffs going forward.

This year the NFL instituted a new technology for the referees, basically each ref is equipped with a wireless headset that allows them to communicate without having to huddle up. The system is encrypted and includes an earpiece and microphone. The crew chief also has the ability to communicate with league officials including Vice President of Officiating Dean Blandino. There was no explanation of the flag being picked up given by the officials during the game. Blandino himself has come out and said the non-call was debatable but holding should have definitely been called. Maybe Blandino or some higher up in the NFL was in the ref's ear and told him to pick up the flag because the NFL had a favorite and wanted the Cowboys to have a better chance of winning the game. 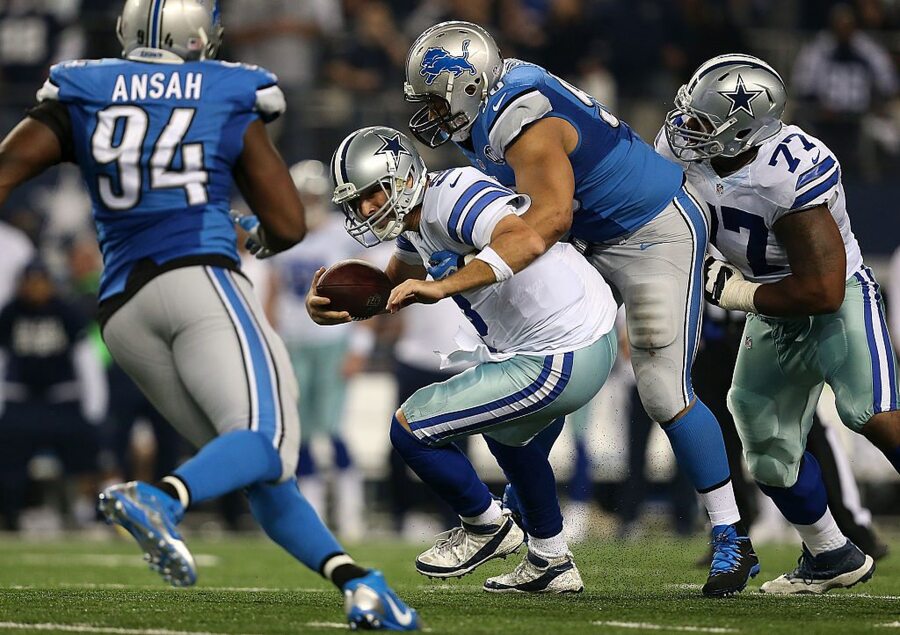 It's easy to come up with a conspiracy theory but in order for it to be viable there must be solid reasoning behind it. In late 2014 a Harris Poll determined that the Denver Broncos were the most popular NFL team passing the Dallas Cowboys who had been #1 since 2007. Rounding out the top 5 were the New York Giants, the Green Bay Packers (who the Cowboys will play next) and the Pittsburgh Steelers. Although the Detroit Lions are not as popular, they did make the biggest jump, moving up from #22 to #13.

Another way to gauge the popularity of teams is by the number of "Likes" each team has on Facebook. As of July 2012 the Cowboys had the most with over 3,750,000. Furthermore, the Cowboys were the most liked team in the states of Oklahoma, Utah, and New Mexico among other regions. By the same token the Lions had just short of 650,000 likes, finishing 20th among the NFL's 32 teams. The Cowboys would have won 66 congressional districts while the Lions would have only won 14.

Following the money, the Cowboys are estimated to be worth $3.2 billion. The team generated $560 million worth of revenue 2013 with an operating income of $246 million. They became the first sports team in the United States to pass the $3 billion mark in 2014. By comparison they are the second most valuable team in all of sports, only trailing the Spanish soccer team Barcelona.

On the other hand, the Detroit Lions are the 28th most valuable team in the NFL with an estimated worth of $900 million. Detroit is actually the only team in the NFL that is losing money and has an operating income of negative $3.5 million. Their most recent stadium was built 11 years ago and cost $430 million of private and public money. The Cowboys' AT&T Stadium opened in 2009 and cost $1.2 billion to build. Arlington, Texas taxpayers contributed $325 million while Cowboys owner Jerry Jones was happy to foot the rest of the bill.

Taking a look at Fall 2014 TV ratings for a period of September 7th through November 2nd, the NFL dominated with 26 of their games making the list of Top 30 most watched shows. The highest rated game was between the Cowboys and Seahawks with 30.0 million viewers on October 12th. The Cowboys were also involved in the 3rd most watched program against the 49ers, 6th most watched show against the Giants, 12th versus the Saints, 13th versus the Cardinals, as well as the 22nd and 26th most watched TV shows. The Lions only appeared once at 17th most watched as they played the Packers as part of a split audience with the 49ers vs. Cardinals. The Cowboys were also the most watched team in 2013, playing in five of the 10 most watched games. If Dallas and Seattle win in the Divisional round of the playoffs the NFC Championship game would be a rematch of the highest rated TV show of the Fall.

The numbers clearly show that the Dallas Cowboys are by far the more popular team over the Detroit Lions. They have more money, they have more fans, and they have higher TV ratings. So did the NFL pick up the flag during the game to give the Cowboys a better chance to advance in the playoffs? Was this some type of conspiracy to get higher ratings and make more money? Or did the referee actually change his mind and decide it was not a penalty after all? Let us know what you think and who you're rooting for!