Dr. Dre Is NOT A Billionaire. Let's Clear This Up Once And For All.

First off, let me just say that I love that fact that people take the time to leave comments on our articles or email us directly with their unfiltered opinions. If you ever have something you want to share, you can use the "Contact Us" link at the bottom of every page or just leave a comment on any article. I literally read every comment that gets posted. Literally, literally. From time to time, we hear the same incorrect comment enough times that we feel the need to address it directly. For example, there was the time that people kept writing to say that Rick Ross was way richer than our listed estimate because an audio track on his latest album made it sound like the rapper had $92 million in his checking account. Then there was the time that people thought Raven Symone was worth $400 million because Ebony Magazine proclaimed her to be "The $400 Million Woman". The truth was that Ebony was referring to the fact that Disney had earned roughly $400 million off Raven during her career to date. A similar rumor popped up about Janet Jackson being billionaire because an advertisement in Variety Magazine congratulated her on being a "billion dollar entertainer". Once again, the advertisement was actually referring to the fact that Janet's career had generated approximately $1.2 billion in revenue from music sales, box office receipts, concert tickets, merchandise. But that money doesn't all go to Janet. The $1.2 billion dollar figure was gross revenue, most of which goes to movie studios, record companies, concert venues etc. And finally there was the time that a random blog called "NaughtyButNiceRob.com" announced that Madonna was a billionaire because her MDMA tour generated $300 million in ticket sales. This blog assumed that Madonna just gets to keep every single dollar that her tour generates, without taking into account any kind of expenses or taxes. Clearly that is ridiculous.

The latest rumor I feel compelled to address directly is the belief that Dr. Dre is a billionaire right now because of the $3 billion Beats By Dre sale to Apple. Several times a day, someone emails us or leaves a comment somewhere on the site saying that our net worth estimate for Dre, $750 million, is way off. There are two main reasons most people think our estimate is wrong. #1) Some people think we simply forgot to take into account the Beats sale altogether and that our number is just out of date. And #2) Some people think that the math we used to show how much Dre earned off the actual sale is wrong. So let's clear this all up right now, once and for all!

Complaint #1: "You forgot to include the money he made from selling Beats by Dre!"

Answer: Just gonna keep this a simple answer: No we did not. Moving on.

Complaint #2: "Your math on the Beats deal is wrong!"

Answer: Ok so let's get down to business. Here's exactly how we determined Dre's current net worth to be $750 million. Firstly, without even including his stake in Beats, Dr. Dre had a separate $200 million fortune that was earned from his various non-Beats related ventures, music, real estate, commercial endorsements etc. A large portion of this $200 million comes from his highly successful 30-year career in the entertainment business in the form of royalties, record sales, producer fees, concert tickets, merchandise… 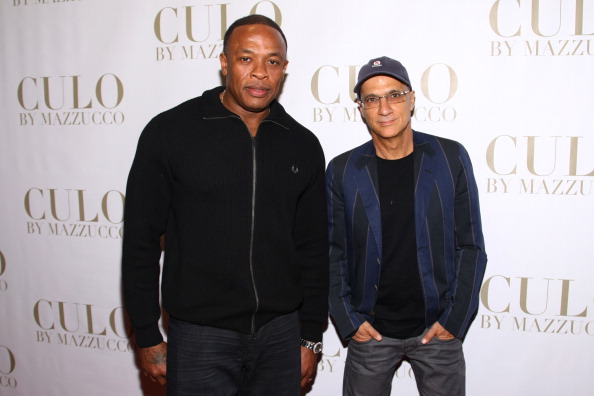 What about the Apple stock he now owns? Could that make Dre a billionaire?  Ok, this is actually a valid question. The Beats sale was made up of $2.6 billion in cash and $400 million worth of Apple stock. As a 25% owner, it's presumable that Dre now owns $100 million worth of Apple stock. At Apple's current stock price of $95, that means Dre likely owns a little over 1 million shares. In order for Dre to become a billionaire from his stock holdings, Apple's share price would have to increase by 320%. That would mean Apple was trading at $400 a share and Dre's holdings would be worth $400 million. $400 million after taxes would put his overall net worth above $1 billion. Or at least very very close. So how likely is it that Apple's stock price would increase 320% to $400 a share? Pretty much impossible. At $400 a share, Apple would have a market cap of $2.4 TRILLION dollars. The current record for most valuable company of all time is $623 billion, set by… you guessed it! Apple, back in August 2012. For some perspective, if Apple was worth $2.4 trillion, it would be more valuable than Exxon, JP Morgan, GE, Berkshire Hathaway, Microsoft, Facebook, Google and British Petroleum… COMBINED.

Before anyone writes in to say that Apple has traded above $400 before, please keep in mind that the company did a 7 for 1 stock split in April 2014. So any price you see from before April, divide by 7.

If you've made this complaint, you are skipping over something very simple: When Forbes and CNW said Dre was worth $550 million a few months before the Beats sale, that estimate already included the estimated value of Dre's Beats stake at that time. At the time both sites made their estimates, Beats By Dre had recently been valued at $2 billion thanks to an investment from the Carlyle Group. 25% of $2 billion was $500 million. $500 million after taxes is $330 million. $330 million added to Dre's $200 million non-Beats fortune equals $530 million. We rounded up to $550 million to be safe.

A bunch of people who wrote in were angry because they believed we did not calculate Dre's taxes properly. Taxes! We in here talking bout taxes. Not a game. We talkin about taxes right now. Taxes. So let's talk about taxes.

Side note: There's a common misconception that the IRS collects all taxes in the US. The truth is the IRS only collects Federal taxes and then every state has their own collection agency for state taxes. In California that agency is called the state Franchise Tax Board (FTB). When someone like Dr Dre has a huge profit windfall, or just needs to simply pay his annual income taxes, he has to pay the IRS and the FTB.

So, a few people seem to be under the impression that Dre would be allowed to deduct what he paid in state taxes BEFORE calculating how much he owed to the IRS. This is just absolutely false. Let's pretend you are a California resident who earns $100,000 off the sale of a long term investment. You will owe 13.3% to the state of California ($13,300) and 20% to the IRS ($20,000) for a total of $33,300. What you absolutely can NOT do is deduct the 13.3% before calculating the IRS payment. In other words, you can't subtract $13.3k from 100k to get $86.7k and THEN calculate 20% of $86.7k to get a $17.3k IRS bill. That's not how taxes work in anywhere in United States. If you are doing this on your personal taxes, you are setting yourself up for a very painful audit at some point down the road. That's not to say there aren't legitimate deductions that allow you to reduce your taxable income, but your state tax expense is not one of them. And by the way, even if you could deduct your state tax payment (but just to be clear, you can't), if there was a magical world where that was true, Dre still wouln't be a billionaire.

Finally, a bunch of people made the fair assertion that Dr Dre probably has the best accountants and lawyers in the world who will squeeze every tax loophole imaginable for him. Totally agree. But on the other hand, the reality is tax loopholes typically just delay an inevitable tax payment by kicking it down the road a few years. Loopholes really aren't as magical as you might think. Just ask Wesley Snipes.

The biggest tax loophole that exists in the United States today is called a "tax inversion tactic". The tax inversion tactic is a controversial – but totally legal – loophole that allows a US corporation (individuals can't do this) to acquire a much smaller foreign company then re-organize the new combined entity in a business-friendly country like Ireland. I could go into the details of how this works in practice, but it might take up another 1000 words. To keep it as simple as possible: You buy small foreign company. Rent an office in Ireland and hire a secretary to play Candy Crush all day from her desk. Christen this "office" your new World Headquarters (even thought it's home to one employee who plays Candy Crush all day). As crazy as it sounds, you are now technically an Irish corporation and Irish corporations are taxed at 12.5% compared to 35% in the US. Significant savings, but there's a catch. All the money you make in Ireland has to stay outside the US. Meaning, you can't just transfer your hundreds of millions in profits to your Bank of America account at home, because it will get taxed there. So you have to be willing and able to park tons of money overseas. There is currently an estimated $72 billion in corporate dollars parked overseas that can't ever be used at home to build a factory or hire new workers. A lot of CEOs have asked the US government to either lower the corporate tax rate or give everyone parking money a one time holiday to bring the money home at a lower rate.

Ok how does that relate to Dr Dre? Well, let's say at some point one of Dre's accountants put his Beats ownership stake under an Irish corporation. When the sale occurred, the corporation would have paid 12.5% of $750 million, roughly $94 million. That would leave him with a net worth of $856 million, which is $156 million than the normal setup and still less than a billion. Unfortunately, of that $856 million, roughly $656 million would be extremely difficult to use in the United States. But the main point is, even if Dre had taken the time to set this up before hand (and there's no evidence that he did) he still wouldn't be a billionaire. And that's if he used the biggest tax loophole that exists in the entire US tax code.

I hope this didn't come across as too much of a rant. And as always, we welcome your feedback in all forms! Please leave comments below or email us directly.