Did Beyonce Make $300 Million Off The Uber IPO?

There's a very popular tweet floating around the web today that claims Beyonce made $300 million off Uber's IPO. The story goes that at some point a few years ago Beyonce performed a private concert for Uber employees and instead of taking $6 million in cash as payment, she requested $6 million in stock. That story is actually true. But is it true that those shares are worth $300 million today? Let's dig into it…

Here's the Tweet, from a user named @KevinLeeJones1, that kicked this whole rumor off: 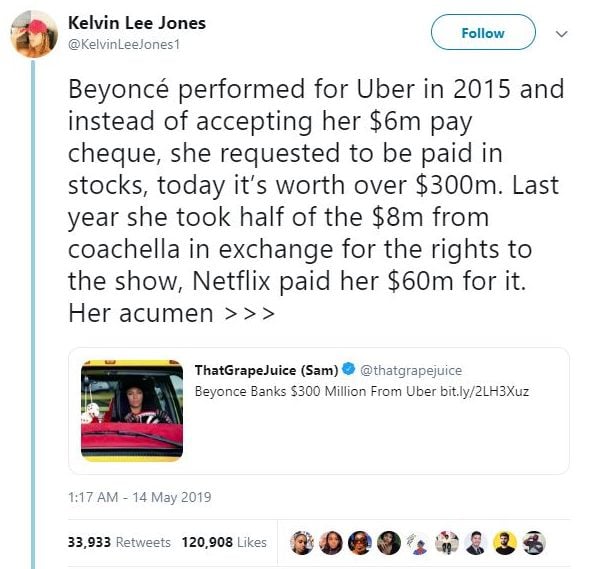 As you can see, the above Tweet has gotten 121,000 likes and 34,000 retweets in just a few hours. It's likely going to end the day as one of the most liked and shared Tweets of the day.

You can also see from the above screenshot that his Tweet is actually retweeting a Tweet from the a website called ThatGrapeJuice.net which is itself referencing an article from InsideEdition.com which is a re-write of a Forbes article. The Forbes article does indeed mention the story of Beyonce taking $6 million worth of stock in exchange for a private 2015 performance. The source of Forbes' info is this article from the New York Times from the brilliant Mike Isaac who recently published an amazing insider's account of Uber's history called "Super Pumped: The Battle for Uber" which is available on Amazon by following this link (highly recommend!).

In Mike's NYT article he details how Beyonce did indeed turn down a $6 million performance fee and instead requested to be paid in stock. Uber's then-CEO Travis Kalanick agreed. Amazing! She must be worth hundreds of millions more now thanks to Uber's IPO on Friday, right???!!! 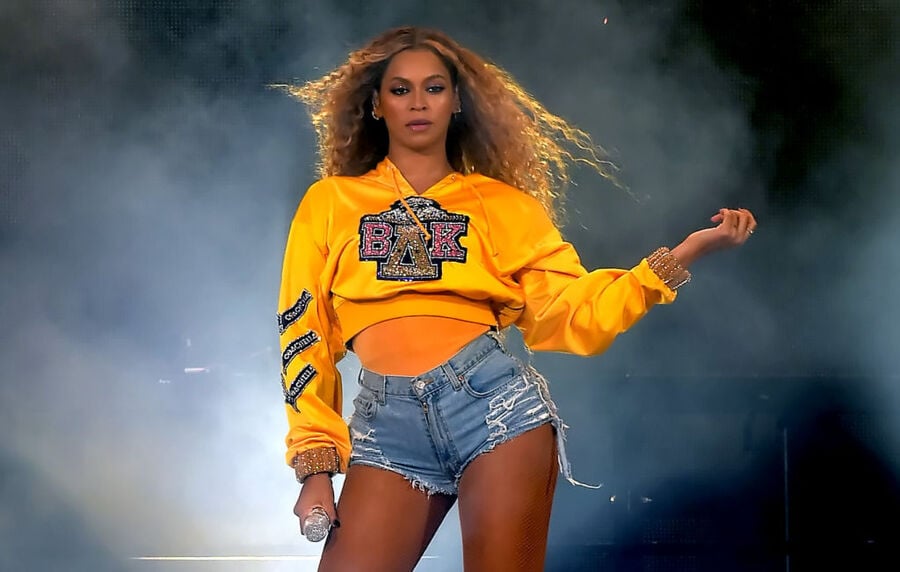 Here's what's extremely important to understand: Beyonce was given $6 million WORTH of restricted stock units (RSUs). She was NOT given 6 million shares.

I think this huge distinction is where the fake news insanity of this story has gotten out of control. If you didn't understand that Beyonce got $6 million WORTH of RSUs, as opposed to 6 million shares, you might have assumed that with 6 million shares at an IPO stock price of $45, Beyonce's stake would be worth $300 million ($270m at the IPO to be exact, and $234m at today's close).

What really happened is that Beyonce got $6 million worth of shares at a time when the company was valued at $50 billion. Assuming she held on to all of those shares, at Uber's current market cap of $67 billion, her stake would be worth around $9 million. A very nice win, but certainly not as awesome as saying she made $300 million off Uber.

Here's some more specific math courtesy of the Financial Times: In the summer of 2015, Uber raised $1 billion at a valuation of $50 billion. That translated to around $39.64 per share. Using that share price, it would be presumable that Beyonce got around 151,000 shares of Uber in 2015. Let's assume she still owns every share AND she never got diluted by future fundraising rounds (unlikely). Today Uber is trading at $43.21 so her 151,000 shares are worth $6,524,710 (before taxes).

So as much as I'd love to say that Beyonce made $300 million off Uber's IPO, unfortunately the rumor is false.

I also have not seen any evidence supporting the second part of @KevinLeeJones1's Tweet above about Beyonce taking half the fee from Coachella so she had the film rights to sell to Netflix. It's been fairly well reported that Beyonce earned the standard $4 million from Coachella and Coachella simply had to agree to allow her to film in order to get her to perform. Beyonce is powerful enough to get that deal without having to take a paycut and she has a three-film deal with Netflix that pays $20 million per film.

And while we're debunking rumors, can I please remind everyone that Kylie Jenner is NOT a billionaire.

Final note – A bunch of celebrities invested in Uber. Ashton Kutcher, Olivia Munn and Jay-Z all made small investments early in Uber. Much earlier than Beyonce. But even those investments are likely not worth enormous fortunes. To illustrate my point, it's known that Lance Armstrong was included in Uber's 2009 investment round when the company was worth just $3.7 million. If Lance held on to his stake to this day, after all the dozens of future investment dilutions, today his stake is worth $20-30 million at most. Jay-Z invested two years later when the company was worth $60 million… My point is, please be careful to not jump to conclusions when you hear stories about early investments.