By Joseph Gibson on September 13, 2016 in Articles › Celebrity News

A designer with as much success in his chosen field as Karl Lagerfeld also has access to any art supplies he might want, no matter how expensive. In his case, his preference is for the complete Albrecht Dürer colored pencil range from art brand Faber-Castell, and now it can be your case too, provided you're willing to shell out nearly $3,000 for a limited edition product called the Karlbox.

The Karlbox is a special, limited edition item inspired not just by Lagerfeld's preferred sketchbook supplies, but also a traditional Chinese wedding chest. In all, it contains 350 drawing and painting tools: The aforementioned Dürer set of 120 colored pencils (which are said to be able to be dissolved and used as watercolor pigments using the right paper), as well as "Polychromos color pencils, Pitt ink pens and Castell 9000 graphite pencils along with brushes, a foldable cup, erasers and sharpeners," according to Women's Wear Daily. The box itself is made out of black finished wood, in contrast to the rainbow of colors inside, and it bears its own logo and branding. 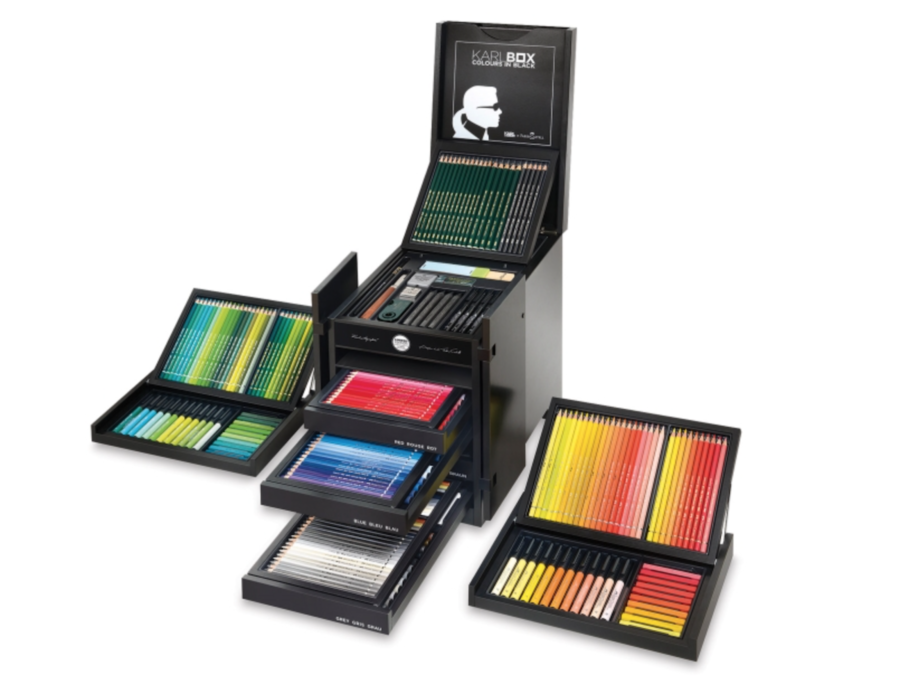 The exact price tag for the Karlbox is 2,500 euros, which comes to about $2,850 USD. Only 2,500 of these luxury items will be made, and they're being sold out of Faber-Castell and Karl Lagerfeld retail locations and boutiques around the world, with additional retailers like Breuninger in Stuttgart, Germany, Jelmoli in Zurich, Switzerland, Le Bon Marché in Paris and Gump's in San Francisco getting their own limited supplies starting on September 19th. $2,850 may seem like a lot to pay for a box of art supplies, but compared to most things Karl Lagerfeld's name is on it's a downright bargain.