By Brian Warner on September 14, 2014 in Articles › Celebrity News

Normally when you order an Uber or a Lyft, the car that arrives is pretty modest. Maybe a Honda Accord, a Ford Fusion, or a Toyota Prius. I would bet that the average price of an Uber or Lyft car is around $25,000. You might periodically get picked up in the rare Mercedes or BMW, but for the most part, the cars are fairly unremarkable. Not trying to be mean, but the drivers also tend to be fairly unremarkable. Don't get me wrong, pretty much ever driver I've ever had was extremely friendly. From what I've gathered, most people who drive for Uber and Lyft, do it to supplement their income outside of a normal job. I've been driven around by a ton of teachers, struggling actors, musicians… even a few budding tech entrepreneurs trying to raise money for their revolutionary app idea.

A handful of Toronto citizens had a very different Uber experience earlier this week. Imagine ordering up an Uber and being told that your driver "Deadmau5" would be arriving shortly in a white McLaren 650S. A white McLaren 650S that is worth over $300,000 dollars.

In case you are unaware, Deadmau5 happens to be one of the most popular and most successful DJs in the world today. A DJ who earned over $20 million in 2013 alone. A DJ who has a personal net worth of $45 million. Here are the results: 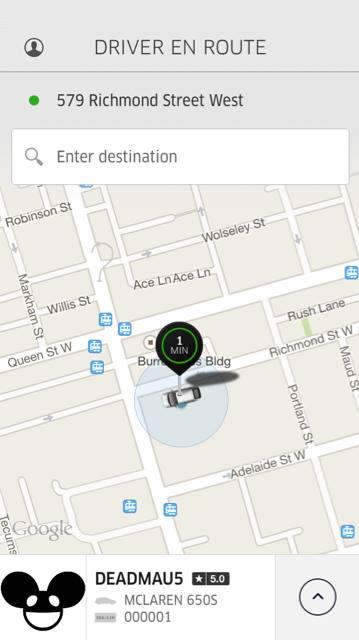