David Gilmour, the axeman responsible for the guitar sounds that made Pink Floyd a worldwide rock icon, recently let go of his incredible guitar collection at a Christie's auction to benefit climate change causes. All together, the collection fetched a reported $21.5 million, but the highlight of the evening was the sale of his famous "Black Strat" guitar to Indianapolis Colts owner Jim Isray for $3.795 million, making it the most expensive guitar ever sold at auction.

Gilmour's "Black Strat" is the 1969 black Fender Stratocaster he played on such legendary recordings as The Dark Side of the Moon, Wish You Were Here, Animals, and The Wall, Floyd classics one and all, which gives the guitar an almost tangible sense of history that backs up its new record status. Isray also snagged the Black Strat's travel case for $175,000, as well as a 1969 Martin D-35 acoustic guitar that you can hear Gilmour strumming on the famous Floyd track "Wish You Were Here." That item went for $1.095 million, a relative steal given the guitar's place in the annals of rock. 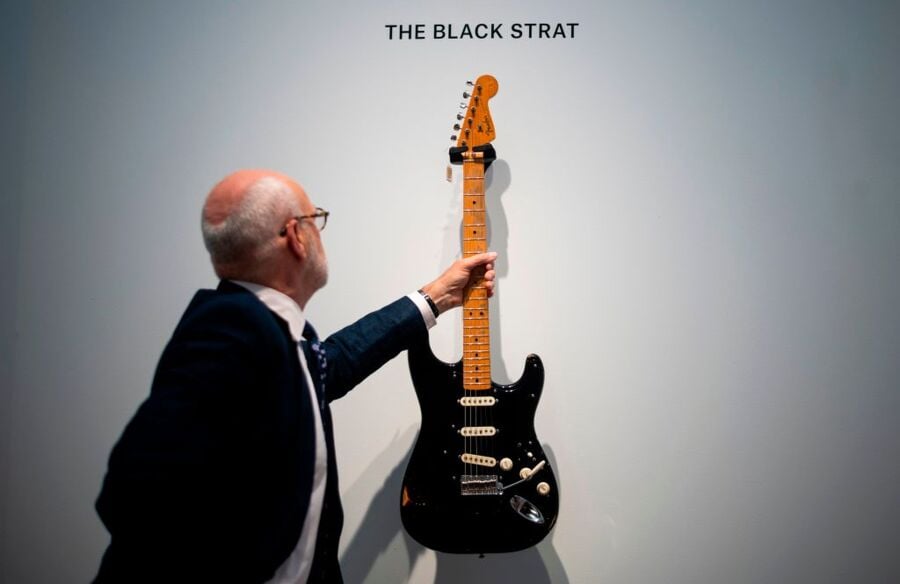 Isray took to Twitter to do some bragging about his acquisitions, and he took the time to demonstrate a little bit of rock music savvy in the process:

"The incomparable David Gilmour.. the greatest 'phrasing' guitarist in the world!! Honored to bring The Black Strat to the public. The most expensive guitar EVER purchased. And for charity!!!"

The previous record for most expensive guitar sold at auction was set back in 2005, when one of Eric Clapton's Stratocasters went for $2.7 million, that sale going towards relief in tsunami-battered Asia. Interestingly, a bevy of rock legends helped out by adding their signatures to that guitar, including Clapton, The Who's Pete Townshend, Jeff Beck, Mick Jagger, Keith Richards of the Rolling Stones, and Led Zeppelin's, Jimmy Page – and also David Gilmour of Pink Floyd.