By Joseph Gibson on October 5, 2018 in Articles › Celebrity News

On Saturday night, Conor McGregor faces off against the undefeated Khabib Nurmagomedov at UFC 229. Win or lose the fight is set to be a massive cash cow for McGregor, the former plumber.  A decade ago, Conor was a plumber on welfare. Today McGregor's net worth is $85 million and that's before however much he'll haul tomorrow.

Spoiler alert. Conor predicts he'll make $50 million when it's all said and done tomorrow. He made this pronouncement at a press conference earlier today at the Park Theater in Las Vegas. Here's exactly what he said when asked about his estimated earnings:

McGregor's estimate is healthy, but it's fairly conservative compared to UFC President Dana White's, who recently guessed that the event would exceed the amount of pay-per-view vibes attained by last year's "The Money Fight" between McGregor and Floyd Mayweather. Admittedly, White is known for sometimes going a little overboard with UFC viewing figures, claiming that last year's event had some 6.5 million buys, while MMA Junkie says the real figure was closer to 4.4 million. 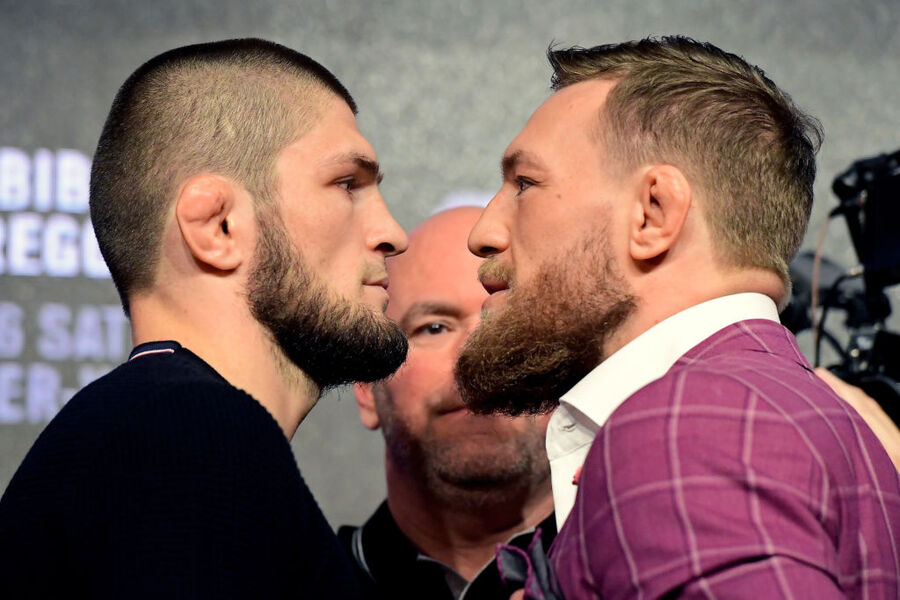 McGregor went on to speak on the general money explosion being seen in the world of mixed martial arts:

"The game has gone to so many new heights, so quickly. And we're all just trying to keep up and catch up. And it's a great time to be involved in the sport for myself, for the fighters, for the promoters, for the managers, for the media in attendance, times are good. So let's enjoy these momentous occasions."

That's especially true for McGregor himself, who is consistently among the highest earning athletes right now, with not only tomorrow's payday but a new whiskey set to launch soon. During the press conference, a reporter asked him whether he expected to hit actual billionaire status, and his response was just succinct enough to be convincing: "I'm 30 years of age – I'd say by 35."

Whether or not that actually happens depends on several factors, including his endorsements and new business ventures such as his newly-launched whiskey label. On September 20, Conor and the UFC revealed they had signed a new six-fight deal that is estimated to be worth an average of $30 million per fight. Roughly $200 million all in. A very impressive number, but still a decent bit away from billionaire status. He's going to need a Beats By Dre level product deal to push that billionaire status. And in five years? Gonna take a whole lot of Irish luck!