The Chinese "Kim Kardashian" Spent $31 Million On Her Wedding

Remember how outraged the world was when Kim and Kanye dropped $12 million on their extravagantly over the top wedding? Well, sit down and hold on because one Chinese couple just made Kim and Kanye's fete look like a Las Vegas elopement. Angela Yeung – better known as Angelababy – and her husband, Huang Xiaoming, spent $31 million dollars on their wedding. You heard me right, $31 million buckaroos. For some perspective, William and Kate's royal wedding cost $34 million and the average American wedding costs a mere $26,000. Who are these people? They must be billionaires, right? No, not really…

Angelababy is commonly compared to Kim Kardashian. In fact, she is known as the Chinese Kim Kardashian. She is a model, actress, and singer who got her start modeling at the age of 14. Originally from Shanghai, Angelababy made the transition to film in 2007 when she was 18 years old. She currently appears on the show Love Yunge from the Desert. Angelababy's net worth is $40 million. She basically spent most of her net worth on her wedding. So who is the lucky groom?

Huang Xiaoming is a 37-year-old Chinese actor from Qingdao, Shandong. He began acting in elementary school and attended the Beijing Film Academy. After a few smaller roles, Xiaoming shot to fame when he was cast as the lead in the series Dan Han Tian Zi. He appeared on that series from 2001 to 2005 and then went on to star in films and other television shows. He is also a singer who has released two albums. Huang Xioming has a net worth of $80 million.

In other words, the couple spent 25% of their combined net worth on this wedding. 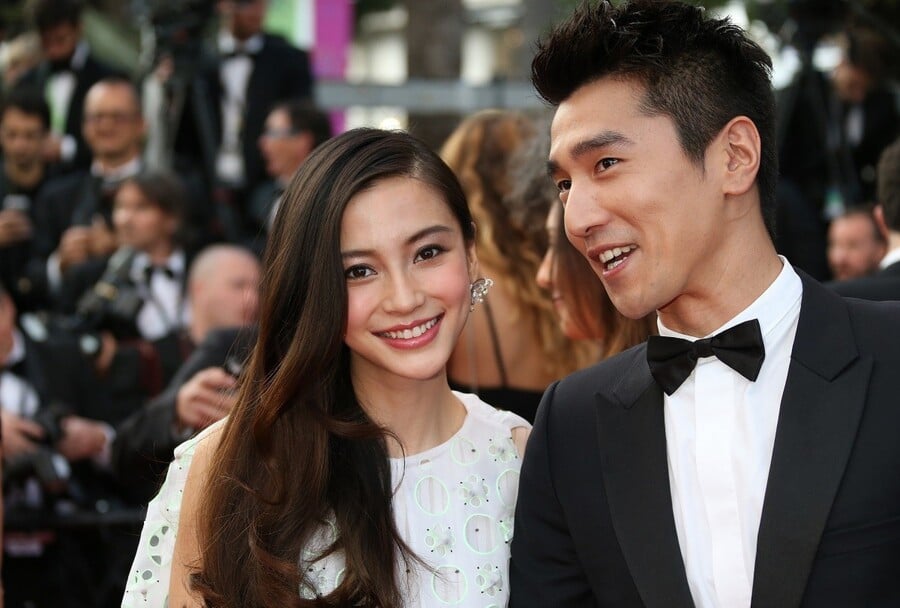 Angelababy and Xiaoming spent almost three times as much as Kim and Kanye on their lavish nuptials. What does $31 million get you? The Shanghai Exhibition Center overflowing with roses, screens displaying photos of the couple from a pre-wedding photo shoot in front of the Eiffel Tower in Paris with Angelababy wearing Elie Saab Couture gowns. The ceremony featured a holographic castle and a 10-foot cake shaped like a carousel that took a month to make. Each of the 2,000 guests, which included East Asia's biggest stars, left the event with a gift bag of expensive items including a cell phone. Oh, and the ceremony was also live streamed on the Internet.

The 26-year-old bride wore a custom Dior wedding gown that took five months to make. It was made of 115 feet of ivory satin organza and 164 feet of tulle. The gown featured a 10-foot long train and almost 100 hand-cut rose bouquets made of Chantilly lace.

The bride's ring is a $1.5 million five-carat pear shaped diamond surrounded by another half carat of diamonds.

The celebrity couple started dating after a mutual friend introduced them at a karaoke bar in 2009.

With a $31 million price tag for the event, let's hope this marriage lasts. It is wasteful enough to spend that much money on a party when there is, for instance, a humanitarian crisis happening in Syria, but to each his or her own, I guess.