In the wake of the September 11th terrorist attacks, Osama Bin Laden quickly became the FBI's #1 most wanted criminal in the world. Bin Laden held on to that top spot for a decade, until his death on May 2, 2011. With Bin Laden down, the world's second most wanted criminal instantly took over the top slot. That criminal was billionaire Mexcican drug lord Joaquín Guzmán Loera, better known as "El Chapo". El Chapo remained the #1 most wanted criminal on the planet until the evening of February 21st, 2014, when Mexican drug agents, working with the American Drug Enforcement Agency, finally captured the fugitive kingpin at a beach resort in Mazatlan, Mexico. Case closed and hooray for the good guys, right?! Well, unfortunately El Chapo escaped from Mexico's highest maximum security prison prison last night. And it's not the first time this has happened…

Joaquín Guzmán Loera's exact birth date is unknown. Most people believe he was either born on December 25, 1954 or April 4, 1957. He was born into a dirt poor family in the foothills of Sierra Madre, the son of a simple cattle rancher. He earned the nickname "El Chapo" (Shorty) from his grandfather because Joaquin stands barely over 5 foot 6 inches tall. Like many poor farmers in that region of Mexico, the teenage Joaquin soon began cultivating poppy and marijuana plants for extra cash. He was very successful and soon was kicked out of his parent's house. His father vehemently disapproved of the life El Chapo was hurtling towards.

Once on his own, El Chapo used his experience to land an entry level job with the Sinaloa cartel. Pretty soon he was seen as a rising star within the organization and from the mid 70s to late 80s, El Chapo was in charge of all logistics for the Sinaloa cartel. El Chapo proved his talents by managing a complex system of transportation that involved airplanes, boats, trains, trucks and individual vehicles that transported cocaine and heroin from Mexico mainly into the United States and Europe but also as far as Asia. In the early 90s, with the advent of home made methamphetamine, El Chapo branched the cartel out from being solely a transportation organization into a large scale illicit drug manufacturer. Controlling both manufacturing and distribution of meth caused Sinaloa's profits to explode. Prior to this innovation, Mexican cartels were considered by other global drug organizations to be nothing more than glorified drug mules. They basically earned a small fee for carrying drugs that were manufactured in Colombia to their final marketplaces.

El Chapo was arrested in Guatemala in 1993. At the time of his arrest, Guzman claimed to be an innocent farmer who earned just $600 a month. He was returned to Mexico and sentenced to 20 years in prison. He ended up serving eight years of that sentence before masterminding a fairly simple escape plan that involved a laundry basket and a $2.5 million bribe to several prison guards. Upon his escape, the United States offered a $5 million bounty for El Chapo's head. Mexican authorities offered an additional $3 million bounty.

El Chapo stayed on the run for the next 13 years until February 21, 2014 when he was finally captured living in a nondescript apartment building in the coastal town of Mazatlan. He had been living a modest life with his beauty queen wife and their twin daughters. When they found him, Mexican authorities also discovered a cache of nearly 100 large firearms, 36 handguns, a rocket launcher and two grenade launchers.

During those 13 years as a fugitive, El Chapo didn't exactly slow down his business aspirations. Under Guzman's leadership, the Sinaloa cartel became the most powerful and violent drug organization in the world. The Sinaloa Cartel is believed to be largely responsible for roughly 100,000 drug-related murders over the last ten years. Today the Cartel controls most of the major drug-crossing points at the Mexico/US border. The DEA began referring to him as the "Godfather of the drug world". In 2011, his personal net worth topped $1 billion, which was enough to make him the 10th richest person in Mexico. 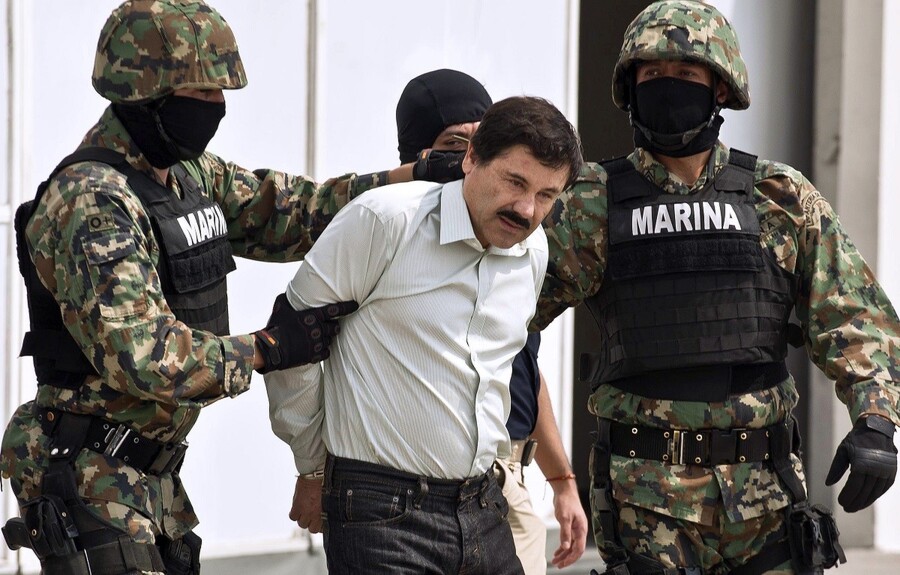 Up until yesterday, El Chapo was being held at a maximum security prison called "Federal Social Readaptation Center No. 1 "Altiplano", located 50 miles outside of Mexico City in the remote town of Almoloya de Juárez, in central Mexico. This is where Mexico houses its most important and dangerous criminals. The vast majority of these criminal VIPs are the heads of various drug cartels. The prison is home to at least 20 high-ranking members of the Tijuana Cartel, Gulf Cartel, Knights Templar Cartel, Los Zetas Cartel and more. He had been fighting extradition to the United States where he would face further charges.

In order to prevent ramming (in the event of a co-ordinated external escape plan), all prison walls are reinforced with one meter thick steel and concrete. The air space around the facility is restricted. Cell phone transmissions are limited to a six-mile radius around the prison so inmates can't make long distance calls to associates with illegal phones. Armored personnel carriers are on alert at all entry and exit points 24 hours a day.

Unfortunately, as you probably could have guessed by now, all these preventative measures were some how not enough to keep El Chapo Guzman locked up.

The last time anyone saw El Chapo was at 9pm on Saturday in the shower area of his private cell. Several hours went by and then authorities realized they had lost track of their most valuable prisoner. After searching his cell, prison guards discovered a 20×20 inch hole near his shower which led to the prison bowels. After crawling through this tiny hole, Guzman apparently used an elaborate escape hatch that was built under the cell, clearly without the detection of authorities. 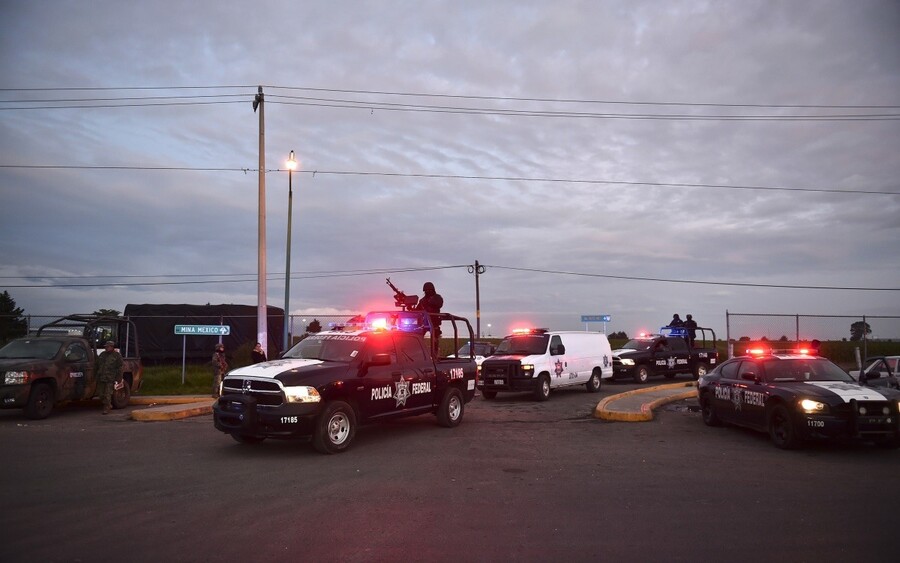 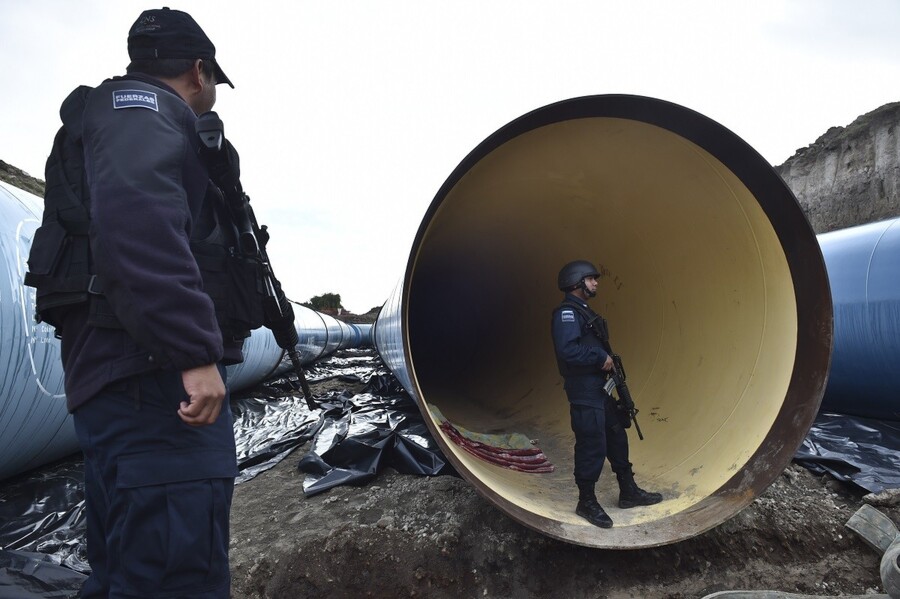 So with this latest escape, El Chapo reclaims the top slot as the world's most wanted and dangerous fugitive. Last time he pulled this off, he was on the lam for 13 years. Clearly he still has access to significant assets and loyalty that was used to make this escape happen. How long do you think he will last this time around?