Bill Clinton Has Earned $106 Million Off Speaking Fees Since 2001

Before Bill Clinton entered the White House in 1992, he earned a salary of $38,167 as Governor of Arkansas. Actually, his base salary was $35,000, the additional $3,167 came from a handful of speaking engagements he performed the prior year around Arkansas. His wife Hillary was the real breadwinner of family at the time, bringing home a salary of $188,547 as an attorney at the prestigious Rose Law Firm in Little Rock. In fact, Bill Clinton really only worked in the private sector for a grand total of two years his entire life prior to being elected President! As we all know now, Bill Clinton eventually went on to serve two terms as one of the most popular American Presidents in history. He also went on to become one of the most highly sought after and expensive public speakers of all time. Just how much money has Bill Clinton has made off speaking fees since 2001? An astonishing $106 million… 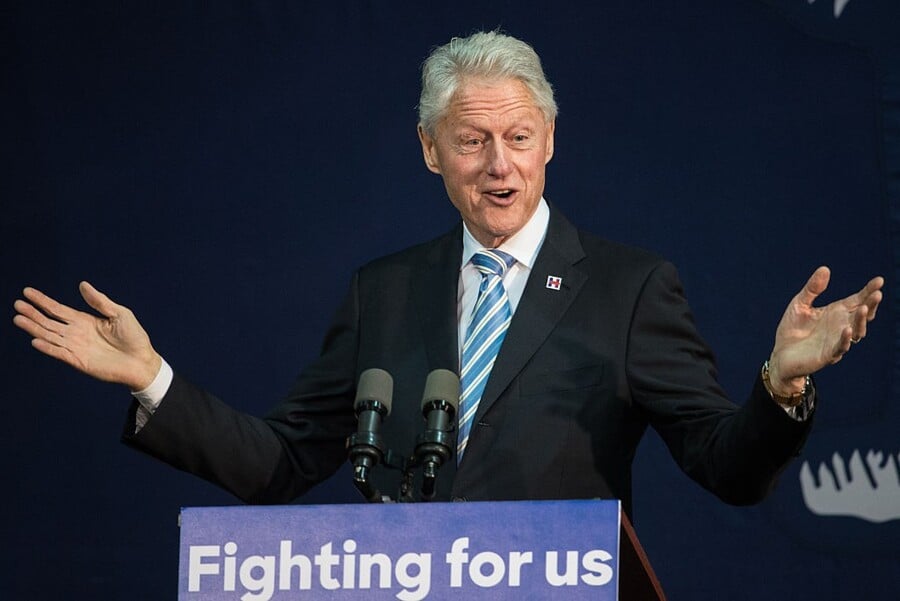 As President, in his final year of office Bill Clinton was paid a salary of $200,000. When he and Hillary left the White House in January 2001, they reported their net worth to be in the $1 million range, the vast majority of which came from her pension account. In reality, their financial situation was actually much trickier. In 2014, Hillary revealed in her autobiography that when they re-entered private life, they were essentially dead broke and drowning in debt. The Clintons owed as much as $10 million to lawyers who helped defend Bill during his impeachment.

Fortunately, as a private citizen, Bill was finally able free to cash in on his worldwide popularity and pay down that debt. One of the first big windfalls came when the Knopf Publishing Group paid him $15 million for the rights to his memoir "My Life". That $15 million is still the largest book advance of all time. Hillary Clinton earned $8 million for her 2003 biography "Living History".

After taking a small break to recover from the stress of being President, Clinton hit the speaking engagement circuit. He immediately became one the most most highly sought after and expensive public speakers in the world. Businesses, foundations, governments and even individual private parties lined up all over the world to have Bill speak at their event. In the 12 years since Bill Clinton has left office, he has given 544 paid speeches all over the world. His fee has ranged from $28,000 to $750,000. The average fee for a single speaking engagement has been $195,000. In 2012, Bill earned $17 million and in 2011 he earned $13.4 million. In total he has made $106 million off speaking engagements since 2001. Interestingly, Bill has earned more money giving speeches internationally than here at home in the US. Out of all of his earnings, $57 million came from outside the US. His international speeches have taken to dozens of countries including Costa Rica, Mexico, Canada, Nigeria and the Czech Republic to name a few.

Earlier this year Hillary Clinton re-entered private life after stepping down as Secretary of State. Hillary quickly earned a cool $14 million advance for future book with publishing company Simon & Schuster. She is also starting to hit the privates speech circuit and earning six figures for her time. Despite their past controversies, the Clintons certainly seem to have stuck together well. If Hillary and Bill continue to cash in and stay out of politics, it's likely that their combined net worth will pass the $200 million mark in the next 3-5 years.

The person who needs to pay close attention to this story is Barack Obama. Similar to Bill, when Barack entered the White House he had very little money and his wife was by far the Bread Winner from a lucrative private sector job. As Barack's star began to rise, so did the sales of his 1995 book "Dreams From My Father: A Story of Race and Inheritance". Between 2000 and 2004, the Obamas had a combined total income of roughly $200,000 a year. In 2005, that number jumped to $1.6 million. Between 2005 and 2012, the Obamas earned an impressive $18 million, mostly off book royalties from his second book "Audacity of Hope".

If Barack Obama follows the financial road that Bill Clinton has paved before him, he also stands to make a fortune. When Barack becomes a private citizen in January 2017, experts predict that publishers will be lining up to pay between $15 and $20 million for the rights to his memoir. Barack will also likely be just as sought after, and expensive, of a public speaker than Bill Clinton. All of this means that Obama's net worth is on pace to break $100 million right around the year 2023.