By Brian Warner on July 1, 2014 in Articles › Celebrity News

I think we can all agree that Beyonce and Jay-Z live a pretty amazing life. They both have built extremely successful business empires that stretch way beyond music into dozens of lucrative industries. They share beautiful daughter who recently turned two years old. They own private jets, private islands, luxury cars, expensive jewelry and mansions around the globe. They are close personal friends with the Obamas and are frequent guests at the White House. They've sold millions and millions of albums during their respective careers and their co-headlining "On the Run" stadium tour sold out so quickly that they added a bunch of extra dates. "On the Run" is currently projected to be the highest grossing musical tour of all time. Yesterday, Forbes crowned Beyonce the #1 most powerful celebrity in the world. Jay-Z came in at a very respectable #6. And as if all of this wasn't enough, the Carters may have just pulled off their most impressive accomplishment yet…

Based on our most recent analysis and calculations, as of June 30, 2014, Beyonce and Jay-Z's combined net worth is now officially $1 billion dollars. Prior to today, the Carters had a combined net worth of $930 million. Of that $930 million, Jay-Z came to the table with $560 million and Beyonce contributed $380 million. For reasons we will explain below, we here at Celebrity Net Worth just increased our estimate for Beyonce's net worth from $380 million to $450 million. For those of you who may not be good at math, $450 million plus $560 million equals a tiny bit more than $1 billion dollars. Here's how we came to these calculations:

We actually analyzed Jay-Z's net worth back in early March when we were compiling our annual list of the richest rappers in the world. Jay came in third on the list with a net worth of $560 million. Jay earns bank from a number of sources. First, he continues to cash in on his 10-year, $150 million Live Nation deal, which last another four years. His Magna Carter tour put $10 million in his pocket. He also earned $5 million from digital sales. In the 12 months between March 2013 and 2014, Jay sold his stake in the Brooklyn Nets and launched Roc Nation Sports, a sports agency in partnership with Hollywood powerhouse CAA. Roc Nation Sports has already cut deals for superstar athletes like Robinson Cano, Victor Cruz and Kevin Durant. In total, Jay's net worth increased $50 million after taxes in the last 12 months.

As we mentioned two paragraphs up, prior to today Celebrity Net Worth placed Beyonce's net worth at $380 million. Thanks to a massive successful tour, merchandise, album sales, endorsements, royalties and more… Beyonce personally earned an estimated $120 million before taxes. Today her empire include a clothing line and a fragrance that sell out faster than her concert tickets. Later this month she is even releasing a 10-part concert documentary series on HBO called "X10". Assuming she pays roughly 42% in combined Federal and state income taxes on her gross earnings, Beyonce would be left with $70 million. And this is being fairly conservative. If the Carters are considered full-time residents of Florida, she wouldn't have paid any state income tax and therefore would be left with $80 million after taxes. Either way, it's just enough for the Carters to reach combined-billionaire status. 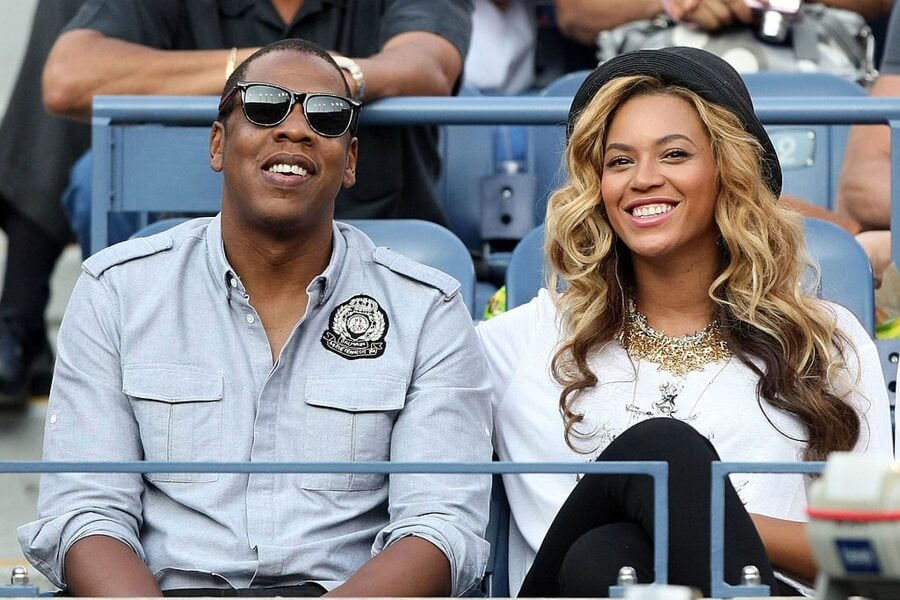 At $1 billion dollars in combined net worth, Beyonce and Jay-Z are easily one of the richest celebrity couples in the world. If you exclude couples where a celebrity married a multi-billionaire, Beyonce and Jay-Z are probably the #1 celebrity couple in the world. This has become a tricky list to track because people like Salma Hayek marry guys like Francois-Henri Penault who alone is worth $15.5 billion. Also, should we count a couple like Steven Spielberg and Kate Capshaw? Sure, Kate was a moderately successful actress, but their entire $3 billion dollar net worth comes from Steven. In the traditional sense, the fact that both Beyonce and Jay-Z are equally successful, wealthy and famous on their own, is probably enough to qualify them as the richest celebrity couple in the world (as most reasonable people would define the concept).

So there you have it. The person I sort of feel bad for with this announcement is Diddy. First he loses status as the richest rapper in the world to Dr. Dre after Apple's $3 billion Beats acquisition. Now he has to sit back and watch Beyonce and Jay-Z become billionaires. Don't be surprised if Diddy suddenly announces his engagement to Oprah in the next few weeks…