It's been a solid career so far for Andrew Luck. All the Colts quarterback has done since he's entered the league is win. He's led Indianapolis to three straight 11-win seasons, and most talking heads will have you believe that last season, he came within a deflated football or two (yes, we're STILL talking about this for some reason) of his first Super Bowl appearance. Yet, he's still extremely underpaid, especially compared to his fellow young quarterbacks.

The Dolphins just signed Ryan Tannehill to a deal that will pay him more than any Miami quarterback in history, and Russell Wilson is still in talks to sign a historically large contract. But the Colts have been steadfast in keeping Luck on his rookie contract. Don't feel too bad for him, though – Indianapolis dragging its feet with a new deal might actually help Luck earn tens of millions more in the long run.

First things first: for the next two years, Luck will be an extreme bargain for his team. He's due to make just $3.4 million this upcoming season, and has a team option for $16 million in 2016, still much less than he'd command on the open market. If he happens to undergo a career-ending (or at least career-altering) injury before the 2016 season ends, the Colts will look like an extremely intelligent team. 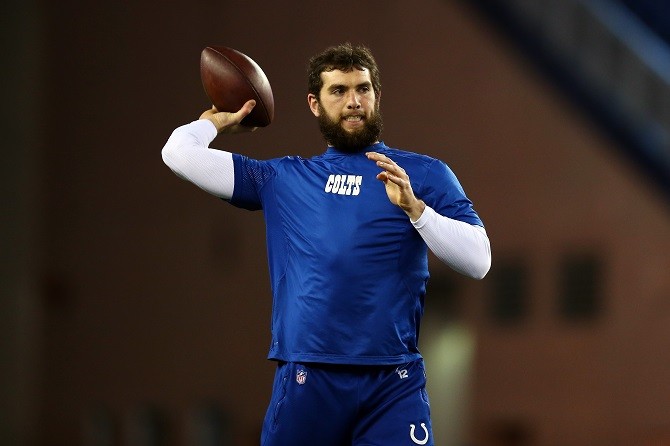 But even though Luck is a mobile quarterback, he's built to take hits. And through his first three years in the league, he's missed a grand total of zero games. Consider this: eight of the nine biggest quarterback contracts in NFL history have been signed in just the past two years. The value of the QB isn't going anywhere; it's a safe bet to assume by 2017 that the average rate for a signal caller will be even higher than it is now.

And it's this current time frame, when we've seen guys like Jay Cutler earn a seven-year, $126 million contract, with $54 million guaranteed. The same Jay Cutler, who missed some time in 2013 due to injury, and rather than seeing the team crumble with a backup at the helm, actually caused the city of Chicago to consider the possibilities of Josh McCown as its quarterback.

Yes, Josh McCown, the soon-to-be 36-year-old journeyman, who had a sizzling 56.3% completion rate with 11 touchdowns and 14 interceptions once he got a starting job in Tampa Bay, almost usurped a man who will earn more this season than Andrew Luck has his whole career.

You see why this could be a problem for the Colts – if Jay Cutler can command that kind of cash, what will Luck be worth in two years? $175 million, with $80-100 million guaranteed? As long as he stays healthy, he's going to get paid handsomely.

If the Colts choose to wait until his deal ends before renegotiating, something they've often done in the past, they could opt to put the franchise tag on Luck. In essence, Luck will receive the average of what the top five quarterbacks made the previous year, or a 120% raise of his 2016 salary, whichever is greater.

If the Colts try to save money and slap the tag on Luck for three consecutive seasons, he could earn anywhere from $78-$98 million, depending on what kind of tender the team uses on its quarterback. Doesn't it make more sense to lock him up now for something like six years and $110 million?

Whatever the Colts end up deciding to do, Luck will soon be the beneficiary of a ton of money.