By Travis Pulver on June 4, 2015 in Articles › Celebrity News

By winning the Kentucky Derby, American Pharoah won his owners a cool $2 million purse. By winning the Preakness Stakes, he earned them $800,000. If all goes according to plan and expectations, he will earn them $1.5 million for winning the Belmont Stakes on this upcoming Saturday. He will also become the first Triple Crown winner since Affirmed pulled it off back in 1978. But as nice as that prize money must be, it pales in comparison to what he stands to make for his owners off the race track through endorsements and… well… boning. Bow chicka wow wow!

First, there is the marketing deal recently signed with popular energy drink, Monster. The details of the deal have not been disclosed, but it has been described as the most lucrative single horse sponsorship deals in racing history.

"We can't wait to be a part of possibly going down in history with our name attached to a fine American icon," Mitch Covington, vice president of sports marketing for Monster, said.

Regardless of what the terms of these deals may be, American Pharoah stands to make his owners some really serious money after the race is over. Earlier this month, owner Ahmed Zayat announced that he had agreed to sell the breeding rights to Coolmoore Ashford Stud in Kentucky. So how much will this stud earn to procreate? A LOT.

Details have not been disclosed for this deal either because Zayat had said that he wants to wait until after the Belmont Stakes to make make the full announcement. What we do know is that Zayat has already turned down multiple $20 million offers for the breeding rights. So, one can presume that the deal with Ashford was extremely generous. 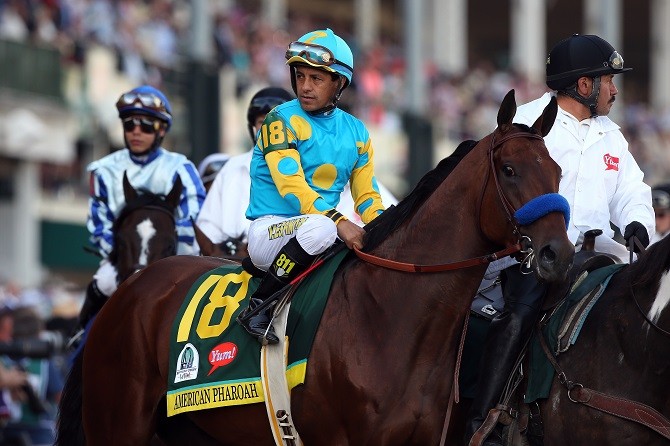 Becoming the Triple Crown winner would have given him some more bargaining power, but an incentive will kick in if he does achieve that honor. Zayat may choose to continue racing after the Belmont, and if so, other incentives will kick in if American Pharoah were to win other million dollar races like the Haskell, Travers, or Breeders' Cup Classic, or if American Pharoah wins Horse of the Year – which he absolutely should, even if he loses the Belmont Stakes.

As nice as American Pharoah's success on the race track has been, the real carrot to breed with him is his lineage. His sire is Pioneer Nile, a big money winner and son of Empire Maker, who won the '03 Belmont Stakes (and his sire won the Kentucky Derby in '90). Another member of his family tree, Mr. Prospector, has descendants that have won 42 Triple Crown races. His great-great grandsire, Northern Dancer – the most successful sire of the 20th century – was offered $40 million for his breeding rights in 1980 (that's equal to roughly $114 million when adjusted for inflation today) when he was already 20 years old.