By Brian Warner on January 2, 2013 in Articles › Celebrity News

Al Gore has had a pretty amazing life. He has been a senator, Vice President, world renowned environmental activist, Academy Award winner, best-selling author, inventor (of the internet) and even the founder of a television network. Now, thanks to that last occupation, Al Gore can also officially call himself a centi-millionaire. FYI that means his net worth is over $100 million! And ironically, by getting the deal done before 2013, Gore will save $5 million in taxes thanks to his arch nemesis George W. Bush. Not sure if that totally makes up for losing the Presidential election by a hair, but it certainly helps a little. So how did he pull this off? Keep reading to find out… 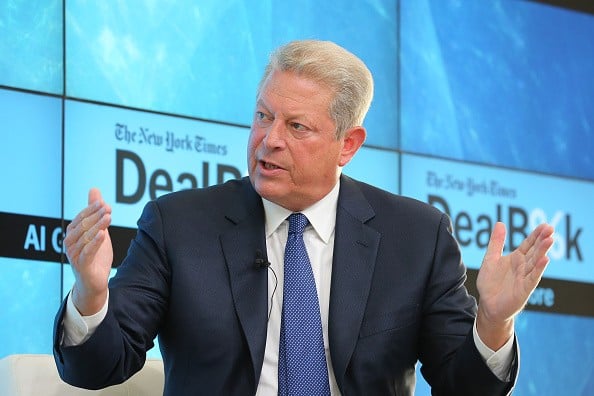 Today it was announced that the Arab-based news conglomerate Al Jazeera is buying Al Gore's cable news channel Current TV for $500 million! Gore is the founder of Current TV and owned 20% of the company, which is how his take from the deal will be $100 million. Gore and his partners were very eager to close the deal before December 31st 2012 when capital gains tax rates were raised from 15% to 20%. This is especially ironic because Gore will save $5 million by taking last minute advantage of the "Bush Era" tax rates that were put in place by his biggest enemy of all time. I guess $5 million isn't a bad consolation prize for being robbed of the 2000 presidential race (allegedly). And if Al is still bitter, there's another $95 million left to lift his spirits!

After taxes, Gore should walk away with at least $85 million from the Current TV deal. When you add this amount to his other holdings, Gore's net worth easily tops $300 million. Gore is a board member of Apple, Inc. and owns at least $35 million worth of Apple shares. He is also the Chairman of Generation Investment Management which has over $7 billion in assets around the globe. $300 million makes Al Gore $50 million richer than Mitt Romney 🙂

As for Al Jazeera, purchasing Current TV will give them access to 40 million potential new American television households, something they've never had. Al Jazeera, which is funded by the Qatari government, has made several attempts at securing their own distribution in the US but is has been blacklisted by most major carriers like Time Warner and DirecTV. Purchasing Current TV gives Al JAzeera instant access to American audiences. The network will be re-branded as Al Jezeera America with the hopes of reaching a new audience of people seeking international news, like BBC America. This may be difficult for two reasons. First, Current TV was never highly rated. They have great distribution, but not many people actually tuned in. Secondly, Al Jazeera still suffers from a terrible image problem in the US after it aired terrorist videos in the wake of 9/11. Personally I can't imagine Americans will ever tune in to Al Jazeera even though it has been more than 10 years since the terrorist attacks. That might just be an inconvenient truth.

For the record, if Al Jazeera was ever interested in taking over net worth based internet sites, we will gladly accept their $500 million, just like Mr. Gore.