After Their Fight, Floyd Mayweather Spent $1.2 Million At A Club… Manny Pacquiao Volunteered At Orphanage.

You could probably fill an entire book just with the differences between Manny Pacquiao and Floyd Mayweather. Differences in their respective boxing styles, differences in their public personae, differences in their life's priorities. But that book would have to be pretty well-written indeed to capture all of those myriad differences better than a simple look at how each fighter spent his time after their fight in Vegas a while back. For his part, Floyd Mayweather continued to earn his "Money" moniker with a lavish celebration, tweeting from his official Twitter account "$1.2mil on Armand de Brignac." In case you're not up on your ultra-expensive champagnes, Armand de Brignac can cost as much as a hundred grand per bottle (which kind of explains how Mayweather managed to drop $1.2 mil on it). But recent reports indicate that Manny Pacquiao did pretty much the exact opposite of what Mayweather did: He volunteered at a Las Vegas orphanage.

It wasn't the first time Pacquiao gave his time to the St. Jude's Ranch for Children, and it's a safe bet it won't be the last. This time, he brought boxes full of boxing equipment and other stuff for the kids to use, but they were probably a lot more excited just to be able to spend time with him. In fact, the visit to St. Jude's is something of a tradition for Pacquiao stretching back to his first trip to the orphanage back in 2001. Pacquiao was boxing professionally then, but he was nowhere close to the level of fame he's achieved since. But that first time, he promised to always pay the orphanage a visit whenever his boxing career found him in Las Vegas – a promise he continued to keep after last month's fight against Mayweather, and practically every previous time he's been in Vegas for a fight (not an uncommon event given Las Vegas' place in the boxing world). And in case you're skeptical about whether Pacquiao's heart is really in this, one director at the orphanage said that Pacquiao likes visiting the kids so much that on a previous occasion he "almost missed his flight back." 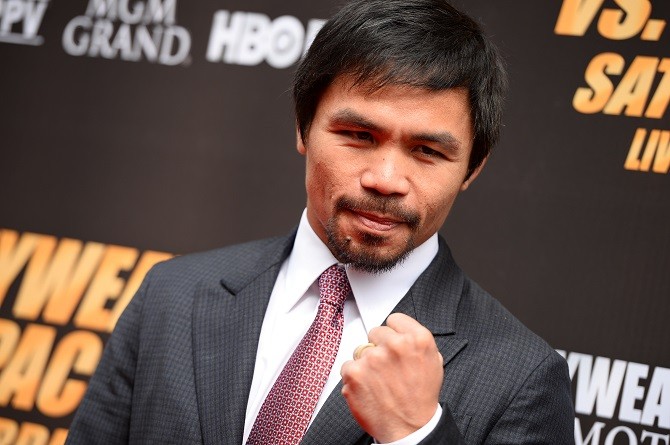 Also worth noting is that this trip wasn't widely known about until the last couple of days – which just goes to show that Pacquiao isn't doing this for publicity or as a jab at Mayweather (although he's probably not losing sleep over the contrast, either). Instead, Pacman goes to this orphanage because he enjoys it, and because his own humble beginnings probably share more than a few parallels with the residents of St. Jude's Ranch for Children.

This might be a good time to talk numbers, despite Pacquiao's insistence that the fight wasn't really about the money – it was still an awful lot of money. Mayweather's net worth climbed to around $400 million or more following the fight, while Pacquiao's is around $175 million. So maybe some charity-minded person could convince them to have an orphanage-building contest in lieu of a boxing rematch, then the orphans of the world would really be set.