By Travis Pulver on June 2, 2015 in Articles › Celebrity News

Adrian Peterson could go down as two things when his career is done and over with: one of the greatest running backs to ever play the game, and an idiot that talked himself out of making $45 million. Sounds crazy, right? Well, it could happen.

Peterson's status has been in flux for much of the last year going from active, to suspended, to the commissioner's exempt list, and eventually reinstated – but the find did not end there. First there were the trade rumors. Several teams had supposed interest in Peterson, but the Vikings wanted much more than anyone was willing to give for a 30-year old running back with a surgically repaired knee. 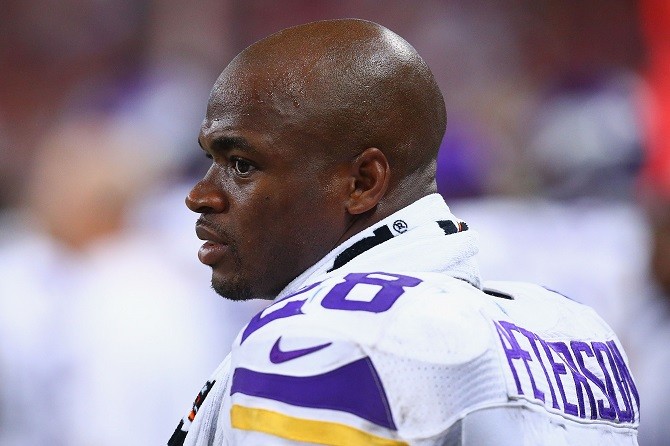 Then came the salary demands. Peterson has three years left on his deal and is set to make another $45 million in that span. There is just one problem in his mind—none of it is guaranteed. Should the team decide it wants to cut him in December for any old reason they could without having to pay him a dime.

In fact, rumor has it that throughout this whole ordeal (suspension, legal matter, reinstatement, contract/trade talks, etc.) Peterson has talked with people close to him about hanging it up. Yes, he has toyed with the notion of retirement, and has not seemed too eager about playing football once again as well.

Could he actually walk away though? We are talking about the best running back in the league! Yes, he is at the age where guys start to decline, but there is no reason to think he actually will.

Should he do it he will not be the first. Former Detroit Lions running back Barry Sanders wanted out of Detroit. They were not going to let him go of course, so rather than play for a sub-par team one more year he walked away from the game.

So should he opt to retire the move is not unprecedented. After some comments from Vikings head coach Mike Zimmer and Peterson's twitter rant it would not be surprising.

Zimmer, in a nut shell, said Peterson will either be playing for the Vikings or not at all next season. He basically reiterated the team's stance that he will not be traded, but that he would be welcomed back (although clearly not with open arms anymore).

"I know hundreds of player's that wished their team would've HONORED the contract! But instead got threw to the side like trash," Peterson tweeted. "A lill crazy how one side has so much power that they can do as they please when it come to the contract! But when the other-side (player's) Feels for whatever reason! Family, Change of scenery or simply – what they feels just might work best for them! Those same laws don't apply!"

"This is nothing against the Vikings. I am just frustrated that our union did not get guaranteed contracts for its players."

According to someone close to Peterson:

"Adrian sees this issue as bigger than him. He truly believes that football players should have more protection with truly guaranteed contracts. It is easier to be quiet and not take the hatred from many people. However, that is not in his DNA."

Could that mean that he would be willing to martyr himself and walk away from the money in order to make a point? Possibly. Guys have done much worse out of anger, frustration and because of a perceived injustice.