Writing songs is a big part of being in a band. But in most cases, before you can put a hit song or record together, you have to come up with a name. And that's not always an easy task.

Just think about how many bands exist in the world. Chances are most regular words are already taken, so sometimes you have to get a little creative.

Here's a look at seven bands who came up with their names in unique ways.

Formed in 1978, English new wave band Duran Duran have had 21 singles reach the top 10 of the US Billboard Hot 100 charts and have sold more than 100 million records worldwide. They were also one of the first bands to shoot their music videos on 35mm film instead of video tape. This strategy, as well as using professional movie cameras, helped their videos positively stand out and led to a ton of airplay on MTV.

When they were just getting started, they regularly played at the Rum Runner nightclub in Birmingham in the United Kingdom. Bassist John Taylor worked the door while keyboardist Nick Rhodes deejayed. A benefit to working at the club meant they got to check out other nearby nightclubs to see major acts, like the Sex Pistols and the Clash.

One of those nightclubs was called Barbarella's, and that inspired the band's name. They were fans of the sci-fi movie Barbarella, which featured a villain named Dr. Durand Durand, played by Milo O'Shea. They dropped the final "d" from the villain's name, and Duran Duran was born.

If you were anywhere near a radio in 1998, chances are you heard "Iris" by the Goo Goo Dolls playing. The song spent nearly 12 consecutive months on the Billboard charts, was featured in the movie City of Angels, and was ranked at the #1 spot on Billboard's "Top 100 Pop Songs 1992-2012" chart.

The band has sold more than 12 million albums worldwide, but perhaps they would have been less successful with their original name, Sex Maggot. As you can imagine, that's not a very marketable band name, and a club owner refused to include it on his marquee.

Forced to be creative on the spot, the band flipped through a copy of True Detective magazine. They found an advertisement for a "Goo Goo Doll," a doll with a rubber and moveable head. The band has expressed disdain for the name, but they got popular soon after the name change, so it seems like it all worked out in the end.

Depeche Mode underwent a series of name changes before settling on its final moniker. The members played in bands called No Romance in China, Norman and the Words, and Composition of Sound—all great names in their own right.

Guitarist Martin Gore took the name from French fashion magazine Dépêche mode. He explained the choice by saying, "It means hurried fashion or fashion dispatch. I like the sound of that."

However, the literal translation is even more straightforward: "Fashion News" or "Fashion Update." Either way, it certainly explains the group's stylistic wardrobe choices over the years. 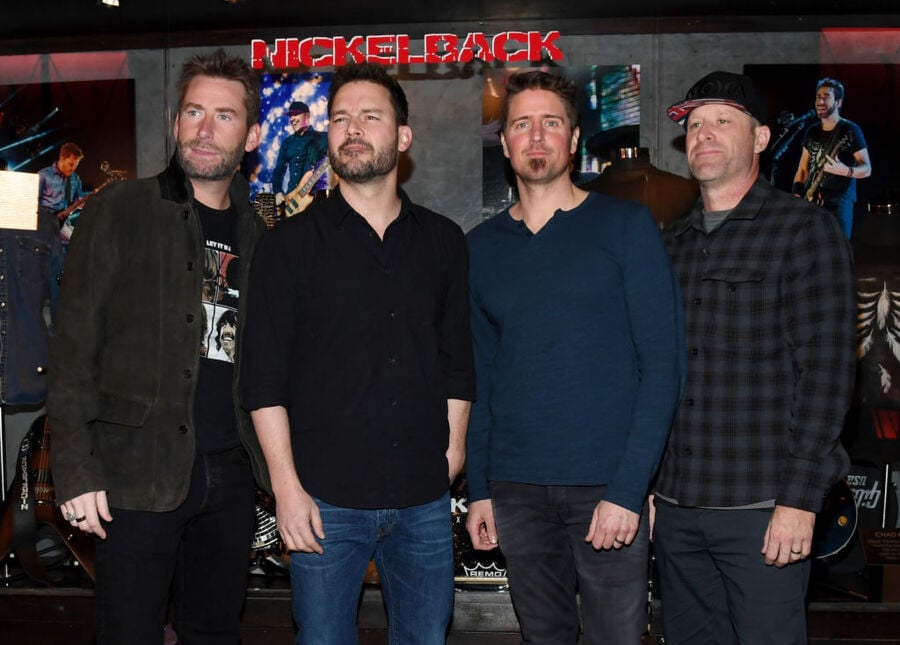 Nickelback is often criticized for being repetitive and formulaic and was named the second-worst band of the 1990s in a Rolling Stone readers poll (behind only Creed, a band with a similar sound). But even with all of that, they've sold more than 50 million albums across the globe, and their song "How You Remind Me" was the best-selling rock song of the 2000s, according to Billboard.

As for their name, you can thank Starbucks. Band member Mike Kroeger was working at the coffee shop, where many items were priced at some variation of 95 cents — for example, a black coffee was $1.95. Kroeger would routinely say, "here's your nickel back" to customers, and his brother Chad Kroeger liked the saying enough to name the band after it.

There are a few conflicting accounts of how Stone Temple Pilots got started, but the most interesting story comes from a Black Flag concert in Long Beach, Calif. Frontman Scott Weiland and bassist Robert DeLeo met at the concert and began talking about their girlfriends. They soon realized they were dating the same woman; instead of getting mad at each other, they broke up with the woman and formed a band.

They originally called themselves Swing, but DeLeo's older brother refused to play in a band with that name. Soon, the band changed its name to Mighty Joe Young and released a demo tape. They were gaining some steam in the rock world and were planning to record their debut album.

However, during that session, their lawyer called to let them know Mighty Joe Young was already being used by a blues musician. The band was inspired by the STP Motor Oil sticker, one of which was on Weiland's motorcycle. They came up with several names with the initials "STP" before settling on Stone Temple Pilots.

Behind singles "Crawling in the Dark," "Running Away," and "The Reason," rock band Hoobastank has carved out a career spanning more than a quarter-century. They've sold more than 10 million albums worldwide, and "The Reason" was nominated for Song of the Year at the 2005 Grammy Awards.

In an interview, Hoobastank drummer Chris Hesse explained how the band got its name, largely due to singer Doug Robb misunderstanding the pronunciation of a German street.

"Doug's brother is the vice president of BMW Motorcycles and lives in Germany," Hesse said. "And there is this street out by his house that is called Hooba Street or something like that and before Doug could pronounce the name, he called it Hoobastank and it was kinda a cute thing and his brother still teases him about it to this day. When we were looking for band names it's almost impossible to find a band name that hasn't been taken. Anything remotely normal has been taken already. I don't remember how it came up but someone said it and we were like yeah."

Alternative band Toad the Wet Sprocket had a string of successful singles in the 1990s. Their hits include "All I Want" and "Walk on the Ocean," which charted on the U.S. Billboard Hot 100 chart at Nos. 15 and 18, respectively. But they have Monty Python to thank for their name.

A sketch called "Rock Notes" from the comedy group's Contractual Obligation Album finds a newscaster reading updates from fictional bands. The humor is in the ridiculousness of the bands' names and the situations their members find themselves in. Toad the Wet Sprocket is the first band name uttered in that sketch. The band's own website stated the name was probably only supposed to be temporary, yet it's endured for more than 35 years.

Eric Idle, who originally performed the sketch, once reflected on the band's name: "I once wrote a sketch about rock musicians, and I was trying to think of a name that would be so silly nobody would ever use it, or dream it could ever be used. So I wrote the words 'Toad the Wet Sprocket.' And a few years later, I was driving along the freeway in LA, and a song came on the radio, and the DJ said, 'that was by Toad the Wet Sprocket,' and I nearly drove off the freeway."