By Joey Held on January 2, 2015 in Articles › Celebrity News

The only thing certain about the 2014-2015 NFL regular season was that absolutely nothing was certain. Teams that looked great one week looked like they had totally forgotten how to play football the next. Fourth-string quarterbacks were called into duty. Rookies had possibly the most impressive collective season in the history of the league. Generally speaking, chaos reigned supreme. And it was fantastic. As the playoffs loom, we thought this would be a perfect time to reflect on this incredible and unique year. Presented for your enjoyment, curiosity and amazement, here are 50 insane facts from the NFL season: 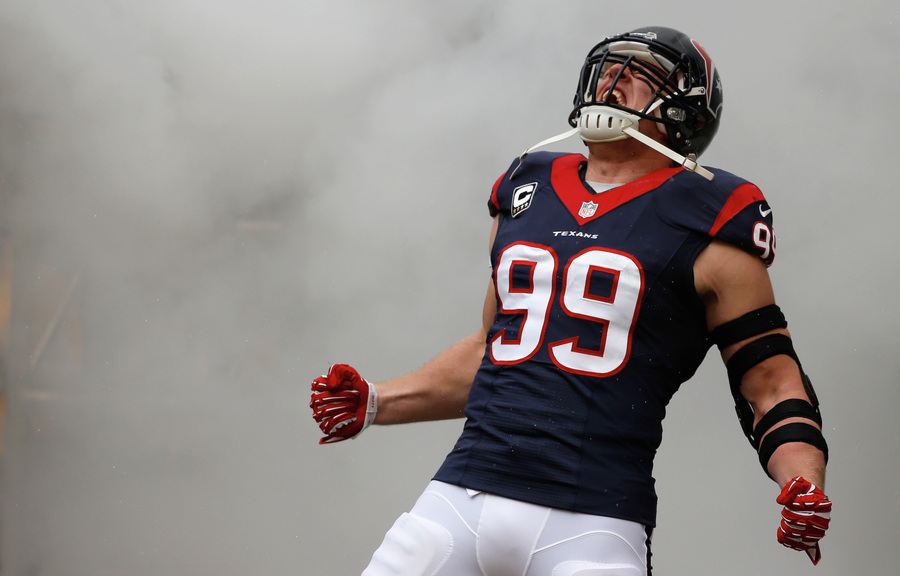 1. The Philadelphia Eagles had 11 return touchdowns this year on special teams and defense. That's tied for the third most in NFL history.

3. The Chicago Bears never scored more than 28 points in a game, and didn't score in the first quarter in 11 games.

4. 10 teams averaged fewer than 20 points per game. Only one, the Cardinals, made the playoffs.

7. Both Buffalo's Dan Carpenter and Kai Forbath went 31-for-32 on extra points.

9. The Kansas City Chiefs went the entire season without any of their wide receivers scoring a touchdown.

11. Murray only had one game where he didn't rush for 100 yards or score a touchdown.

12. He also had 484 more rushing yards than the second-place rusher (Le'Veon Bell).

13. Chicago's Matt Forte caught 102 passes, breaking the record for most grabs by a running back in one season.

15. The Broncos defeated the Raiders by a combined score of 88-31 in two games.

17. Blake Bortles started only 13 games, but was still sacked 55 times to lead the league.

18. 17 different wide receivers caught a pass of 80+ yards, but only one–Martavis Bryant–had a 90-yard grab.

19. Speaking of long bombs, Arizona's Logan Thomas completed one pass the entire year. It went for 81 yards and a touchdown.

20. There were three 90-yard rushing touchdowns this season. All three were the last touchdowns that player would score on the year.

23. New Orleans's Jalen Saunders had the longest non-touchdown kickoff return, almost taking one back to the house for 99 yards. Additionally, Saunders had exactly 99 yards on nine punt returns this year.

24. Odell Beckham Jr. averaged 7.6 catches, 108.8 receiving yards, and one touchdown per game. He also turned himself into a super star with this unbelievable catch:

26. The Bengals and Panthers tied at 37. That's the highest scoring tie game since the NFL instituted an overtime period.

27. It's also the first time we've had a tied NFL game in a month other than November since 1988. Carolina and Cincinnati played on October 12, if you're scoring at home.

28. Oakland's Marquette King had more punting yards than all but two quarterbacks (Ben Roethlisberger and Drew Brees) had passing yards.

29. There were only six kickoff returns that went for touchdowns. No player had more than one.

32. The next biggest fumbler? Russell Wilson. He fumbled 11 times, and had a grand total of zero of them recovered by the other team. Talk about luck!

33. The most fumbles by a non-quarterback was Miami's Jarvis Landry, who fumbled seven times.

34. The league leader in passing attempts has had exactly 659 each of the past two years.

35. Kansas City's Justin Houston, who led the league with 22 sacks, only had three games where he didn't record a single sack.

36. Tony Romo was one completed pass away from having a 70% completion percentage for the year.

38. Cincinnati's Adam "Pacman" Jones called for a fair catch in a game against Tampa Bay. It was the first time in 96 returns, or eight years, that he had done so.

39. The Bengals and Browns played each other twice. The road team won by a combined score of 54-3.

40. Only 24.7% of Jay Cutler's passes were thrown when the Bears were leading.

41. Detroit's Glover Quin led the league with seven intereceptions, including one in four games in a row.

42. Demaryius Thomas and Emmanuel Sanders were second and fifth in receiving yards, respectively. It's the second time in eight years two Peyton Manning receivers have been in the top five for receiving yards.

43. Minnesota's Matt Asiata had nine touchdowns, but only scored in four games.

44. The top 24 scorers in the league were kickers. Marshawn Lynch was the highest-scoring non-kicker, with 102 points.

45. Arian Foster, Mohamed Sanu, Cecil Shorts, and Antonio Brown each threw a touchdown pass. For the season, they combined to go 8-for-8 for 136 yards and the four scores.

46. Every other non-quarterback combined to go 10-for-25 for 169 yards. Eight of those completions were by punters.

48. The quarterback with the best touchdown-to-interception rate? Carolina's Derek Anderson, who threw five touchdowns and no interceptions in 97 pass attempts.