50 Cent Could Make (Or Lose) A TON Of Money Off The Floyd Mayweather Fight – And Not Just Off Gambling!

There was a time when Floyd Mayweather and 50 cent were BFF. They were nearly inseparable. They vacationed together, they partied together, they blasted social media with dozens of selfies where they each covered in huge stacks of cash. It was a match made in heaven. Then it all fell apart. We still don't really know what caused their falling out, but whatever it was, it was bad. Bad enough where last summer Floyd began publicly making fun of 50's declining albums sales and career in general. Then 50 retaliated by announcing to the whole world that Floyd is illiterate. 50 even offered to put $750,000 of his own money to prove his point. It was ugly.

So they can't stand each other, and probably can't even be in the same room as each other. However! A mere personal beef isn't enough to stop 50 Cent from potentially making A TON of money! 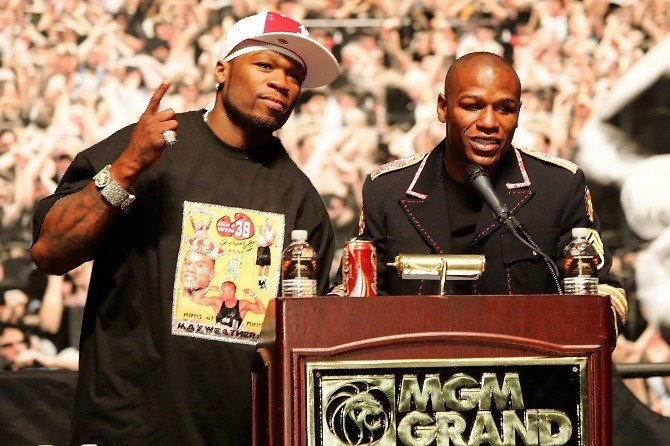 On Saturday, 50 Cent stands to make a whole lot of money from two sources:

1) Gambling. Back in March when the fight was first announced, 50 immediately wagered $1.6 million on his former friend beating Manny. He announced, "the Champ's gonna smoke him. It's gonna look like it was pumped up for no reason." 50 further revealed that he and Floyd actually spoke in person back in February at a Chris Brown concert. He said it was a chilly but friendly meeting and that Floyd was "super focused."

2) Club appearance. Today it was announced that 50 Cent is getting paid $500,000 on Friday night to perform at Drai's Beach Club which is at The Cromwell hotel in Vegas. (50 is also reportedly earning another $500k to do a show in Atlantic City in two weeks for Effen Vodka. Unrelated to the Floyd fight, but still incredible.) Chris Brown is performing on the night of the actual fight at Drai's. Chris is also reportedly earning $500k for his appearance. On both Friday and Saturday night, a six person table at Drai's will set you back minimum of $20,000.

What do you think is gonna happen Saturday? Will 50 Cent walk away happy and rich or sad and slightly poorer?