The 10 Biggest Ponzi Schemes in History

For many people, the term "Ponzi Scheme" is synonymous with Bernie Madoff. But the nefarious practice of fraudulent investing has actually been around for nearly a century. Ponzi schemes have affected everyone from Hollywood stars to billionaires, to the elderly living on fixed incomes.  Unlike most scams, which carry certain hallmarks—sleazy sales tactics, spotty resumes of the people perpetrating it, a general feeling that something isn't quite right, etc—Ponzi schemes are typically run by some very brilliant businessmen who are well aware of the lack of sustainability of their schemes. These 10 Ponzi schemes are not only the biggest, but some of the most shocking of all time:

Charles Ponzi is the man for whom the scam is named, obviously. In the 1920's, Ponzi boldly not just told, but PROMISED his investors that they'd see a 50% return on their money in 45 short days. If they could hang on for 90 days, they'd double their original investment.  And what was this revolutionary investment in? International postal coupons that Ponzi never even bothered to acquire.  Ponzi became a millionaire in six months, earning $15 million. When he was caught a year later, his poor investors only got $5 million back. Ponzi was charged with 86 counts of mail fraud and sentenced to five years in federal prison. While he was in prison, he was prosecuted a second time in Massachusetts. Ponzi argued that this was double jeopardy, which sent his case all the way to the Supreme Court. SCOTUS sentenced him to seven to nine years in state prison.  Not surprisingly, once Ponzi was out of jail, he masterminded another scam in which he sold real estate that was LITERALLY underwater.  He was sent to prison again. He died penniless in Brazil where he worked as a translator.

Lou Pearlman was one of the biggest and most successful music producers of the 1990s.  He was known for putting together and working with The Backstreet Boys, 'NSYNC, and LFO. But giving the world the most popular boy bands of the 1990s wasn't all Pearlman was up to. He also designed and ran one of the longest running Ponzi schemes in the history of the United States.  For more than 20 years, Pearlman convinced his investors to sink their money into two companies that only existed on paper. He created fake financial statements in order to obtain bank loans. All in all, Pealman, who surely made many millions as a music producer, also stole more than $300 million from his investors.  Pearlman was convicted of money laundering, conspiracy and making false statements during a bankruptcy proceeding in 2008 and sentenced to 25 years in prison.

Michael Eugene Kelly earned his spot on this list by defrauding almost 8,000 mostly retired or elderly people out of $500 million. What a peach, right? Most Ponzi schemes leave very little or nothing left to return to its victims but in Kelly's case, he had millions of dollars of real estate and other assets. His scam involved creating universal leases which paid high commissions for selling what were essentially time-share investments. Those who invested could stay in the hotel rooms for up to one week each year, or transfer that week to another company which was also owned by Kelly and which offered an annual return of 11%. Every investor in this scam chose the second option. Kelly was in federal custody for six years from 2006 to 2012 and was released under house arrest on a $10 million bond only so he could undergo treatment for colon cancer. Kelly died in 2013.

Gerald Payne was the Pastor of Greater Ministries International. He was a man of God, but rather than worshipping our Heavenly Father, Payne worshipped at the altar of the almighty dollar. The pastor used scripture to tell his followers that if they invested their money with him and his church, they could double their investment. He managed to get 18,000 people to invest $20 million.  He got away with this scam for years by cashing checks written for under the IRS's reporting limit of $10,000. Eventually though, the tax man caught on. Payne tried to claim that the cash was not an investment, but rather a gift protected under their first Amendment rights as a church. Payne was sentenced to 27 years in prison and his wife was sentenced to 13 years.

Scott Rothstein holds the distinction of orchestrating the biggest Ponzi scheme the state of Florida has ever seen and is currently serving a 50-year prison sentence for bilking investors out of $1.4 billion. The former lawyer was known for his incredibly flashy lifestyle. He owned Bugattis and other expensive cars, over 200 luxury watches, and had golden toilets installed in his home.  Rothstein guaranteed his investors a return of at least 20% in three months on the purchase of fabricated structured settlements. In early 2010, Rothstein pled guilty to five federal crimes. He was disbarred. During the investigation into his activities, his wife Kim attempted to hide jewelry and other assets, and was sentenced to 1.5 years in prison as a result.

What is it with these men of "God"?  Gary Gauthier hosted a Tampa, Florida radio show called "It's God's Money". Something tells me though, that God wouldn't look too kindly on the fact that he stole $6 million from 38 senior citizens living in Pinellas, Pasco, and Hillsborough counties. He lured his marks in by telling his listeners to call him, which is when he would set up a meeting with them, promising them an 8% to 40% return on real estate investments. He ran his Ponzi scheme from 2005 to 2010. In order to lure more investors in, he had current investors call into his radio show to talk about how they got rich quick. Gauthier was charged with a number of crimes including racketeering and security fraud. 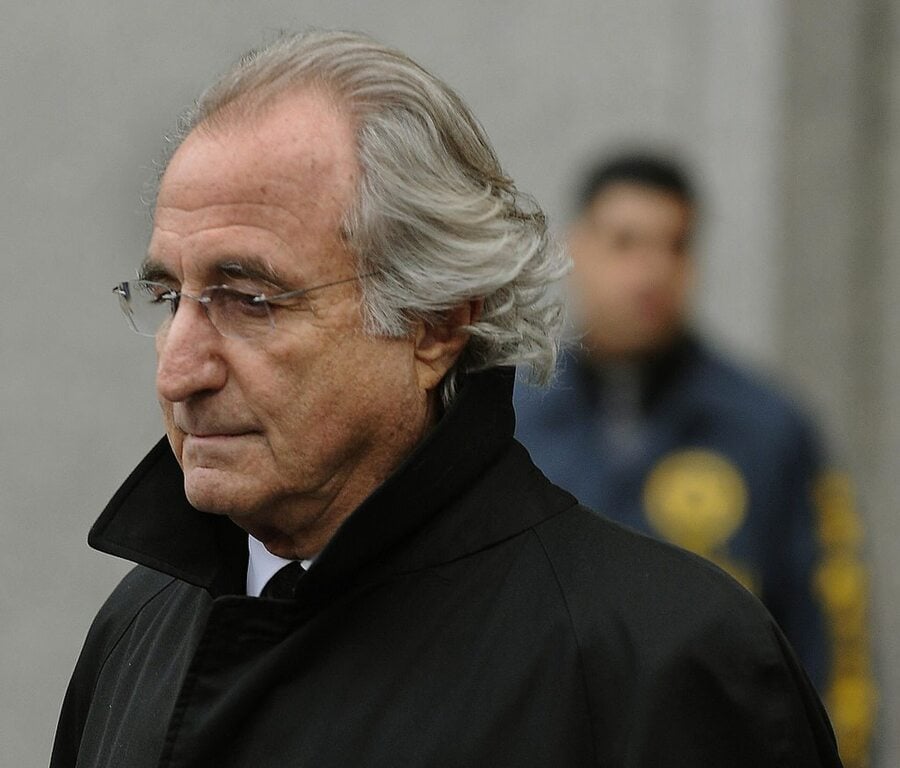 Back in 1984, Adriaan Nieuwoudt, a South African entrepreneur decided to market a beauty product based on an ingredient found in his grandmother's milk-based cosmetics called "kubus". He sold activator kits to his investors, which consisted of a dried plant that would allow them to grow the milk cultures themselves in the kind of work at home scam that has gained in popularity in the years since. The investors would then sell the grown cultures back to the company to be used as an ingredient for the beauty product. Oh, by the way, that beauty product did not exist. No matter how many activator kits he sold, Nieuwoudt would never receive more than one back in any given week. Eventually the South African government shut him down by declaring it an illegal lottery.

Tom Petters managed to steal $3.65 billion in his Ponzi scheme by having investors fund non-existent electronic goods to sell to big box retailers who weren't actually buying them. Petters was a successful businessman who owned a number of well known companies including Polaroid and Fingerhut. His legitimate business interests made him appear to be trustworthy to his investors. In late 2009, Petters was charged with 20 counts of fraud including mail fraud, wire fraud, and money laundering. He is serving a 50-year prison sentence in Leavenworth, Kansas. His Ponzi scheme was the largest fraud in the history of the state of Minnesota.

Reed Slatkin co-founded EarthLink. Starting in 1986, he ran a 15-year long Ponzi scheme through an investment club that promised a 24% return. He stole $592 million from nearly 800 people, was found guilty of 15 counts of fraud, conspiracy and money laundering. Slatkin was also a Scientology Minister and many of his victims were also Scientologists, including news anchor Greta Van Susteren and film producer Aryan Bernstein. Slatkin completed his sentence and was released from a halfway house in 2013.

Of course Bernie Madoff is the most famous of all the Ponzi schemers, possibly even including Charles Ponzi himself.  He orchestrated the largest fraud in U.S. history, stealing $65 billion from investors, resulting in 11 felony convictions. Madoff lived a life of luxury and counted amongst his investors many famous and wealthy people.  Madoff's wealth management company started off as a legitimate business but as Madoff's greed grew, he turned the entire business into the vehicle by which he ran his Ponzi scheme. Madoff's son Mark worked with him but claimed not to know anything about the fraud. However, he committed suicide in December 2010.  Madoff was sentenced to 150 years in prison – the maximum possible sentence for his crimes. He is serving out that sentence in Raleigh, North Carolina.

A lot of people like to joke that the American Social Security system is the biggest Ponzi Scheme of all time. On the surface, Social Security certainly smells like a Ponzi Scheme. You have one group of investors paying into an investment that pays back an early separate group of investors. There is also a lot of talk about how Social Security will run out some day because there are too many baby boomers in the system who will end up depleting the trust fund down to a point where there wont be any money left for future generations to receive a benefit.

If you happen to be a member of that future generation (likely most of the people reading this article), it's easy to understand why you would consider Social Security to be a Ponzi Scheme. The truth is, technically speaking, Social Security is NOT a Ponzi Scheme. The main difference is that in a Ponzi Scheme, the actual investment is a giant fraud. Investors think they are investing in something like real estate, when in fact the money is going out to something completely different (early investors, the schemer's private jet).

Instead of saying that "Social Security is gonna run out some day", the more accurate statement would be "after the baby boomers, Social Security will have a funding gap for roughly 75 years at current estimates". There are two ways to close that funding gap: #1) Reduce the benefits retirees earn during that time or #2) Increase taxes. A better solution would be a combination of both.