This CEO Is Worth $840 MIllion So Obviously He Lives In Las Vegas Trailer Park… Wait, What??

The CEO of online shoe retailer Zappos, Tony Hsieh, has had a reputation for engaging in some pretty frugal habits, given his status as a multi-hundred-millionaire. But his new digs in the city he's turning into his own private passion project, Las Vegas, give new meaning to the phrase "living beneath one's means." That's because despite having a net worth of around $840 million, he's living in an Airstream mobile home in a trailer park in Las Vegas.

Now, full disclosure – the trailer park that Hsieh calls home (or, more specifically, "Llamapolis") is actually owned by Hsieh, as opposed to the usual arrangement favored by trailer park residents, who generally just own the trailer and the stuff inside it. But still, the fact remains that Hsieh, who has enough money to afford all manner of lavish vestibules beyond most people's wildest imaginations, lives in a relatively tiny Airstream trailer, with only a pet alpaca to keep him company.

Before you start making assumptions about Hsieh's trailer park neighbors and flashing back to that one scene in Gone Girl but on a much larger scale, you should know that Hsieh's trailer park doesn't cater to the usual trailer park clientele, if there is such a thing. Instead, it's mostly a haven for computer programmers, who rent the Airstream trailers when they're in town to code for Hsieh. It's all part of a massive investment in Las Vegas by Hsieh to try to turn the city from an adult playground to a legit metropolitan center – an investment to the tune of $350 million, for improving the city's business and entertainment prospects. That might sound like a lot, even given Hsieh's $840 million fortune, but his friend (and early investor in Zappos), Erik Moore, shed some light on Hsieh's approach to finance in a recent interview:

"Money is just a way for Tony to get to his endgame. Money just doesn't matter to him. If he only had a million dollars left, he'd spend $999,999 to make Vegas work. He would be just as happy with a dollar in the bank and being around people he cares about and care about him." 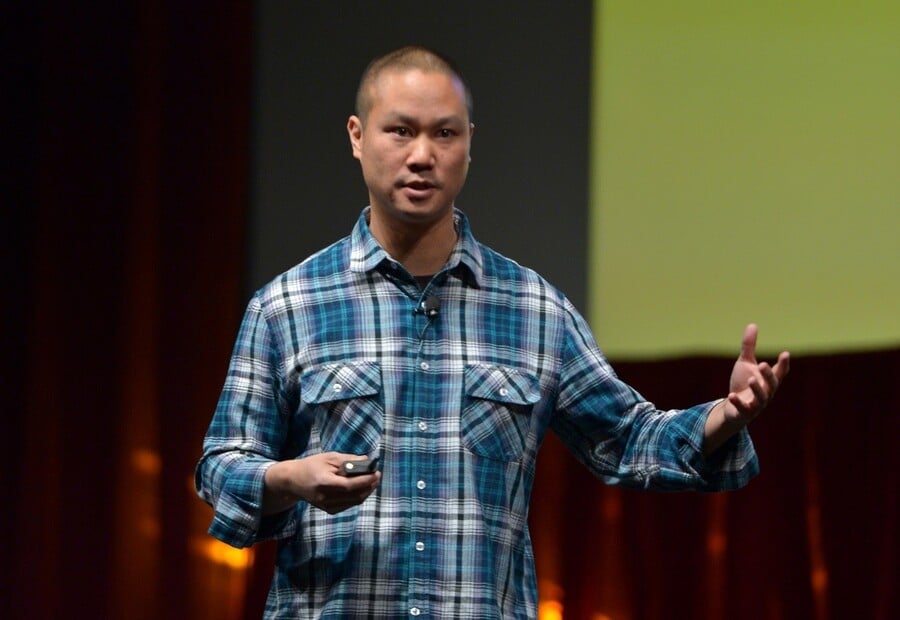 Just as the trailer park that Tony Hsieh lives in isn't what we usually think of as a typical trailer park, the actual trailer he lives in isn't exactly a typical one either. Every trailer available for rent at the park, including the one inhabited on an indefinite basis by Hsieh, is actually pretty state of the art – sleek and somewhat retrofuturistic in design, with modern stainless steel appliances, a stereo with Bluetooth connectivity, and not just one but two TVs. Still, it's pretty impressive if not shocking to see someone with as much money in the bank as Tony Hsieh literally living in a Las Vegas trailer park, no matter how shiny or cutting-edge the trailer may be.