By Chris Kelley on November 23, 2016 in Articles › Celebrity Homes

It's no 1600 Pennsylvania Avenue, but President-elect Donald Trump's top-of-the-building penthouse in Trump Tower is sure to give the White House a run for its money. Estimated to be valued at $100 million, the extravagant New York City residence features three stories, stunning views of Central Park, and enough marble, gold, and crown moldings to make any future first family reconsider the move.

Sitting on Fifth Avenue in Manhattan, New York, Trump Tower is home to Mr. Trump's business headquarters. While the Trump family has been used to simply hopping on an elevator to attend important meetings or commuting via a round trip jet fight, they may soon have to give up the convenience and glamour of New York City for the most famous house in the country.

Decorated in 24-karat gold and marble, the Trump apartment features the unique characteristics of the Louis XIV style by award-winning designer Angelo Donghia. The Trump penthouse is currently home to Mr. Trump, his third wife, Melania, 45, and their son, Barron, 10. Each room contains a new definition of elegance, with a variety of rare, expensive and gold-plated decorations, artworks, and statuettes scattered throughout the pristine decorated apartment.

While neither Donald nor Melania Trump have made any official statements about throwing tradition and maintaining active dual residency at both Trump Tower and the White House during the upcoming Trump presidency, many speculate that the family may be reluctant to part with their Manhattan dream home so soon.

While little is known about the exact specs of the Trump penthouse, it is clear that the multi-level apartment certainly has the Midas touch. From the breakfast room to Melania's study, gold-rimmed furniture and accent pieces are contrasted with rich, vintage chandeliers, fixtures, and expensive Vogue and Vanity Fair books. Another major player in the design scheme of the residence is the Trump family coat of arms, a large family portrait and a separate picture of Mr. Trump's later father, Fred Trump.

Other notable pieces that might not make the cut when packing for the White House in January include the limited print book GOAT: A Tribute To Muhammad Ali signed by Ali himself, a large bronze statue of Greek lovers Eros and Psyche, Greek artwork featuring Apollo and Aurora, and Barron's toy Mercedes.

Melania Trump's office keeps with the apartment's traditional rich décor, while adding some character unique to her. Among the accents featured in her personal study are a reproduction of Renoir's painting, La loge, a Louis Vuitton jewelry case, and a bronze decorative statue of a man and woman enveloped in a kiss.

While there is no doubt that the Trump family has created quite a luxurious living arrangement for themselves in the Trump Tower, it is seemingly unprecedented for a president or first family to reside primarily outside of the White House. According to the New York Times, Mr. Trump has reportedly asked several staffers how many days he'll be required to live at the White House as opposed to his main residence. While no official confirmation exists on Mr. Trump and his family's residency plan moving forward, it is clear that the family – and Mr. Trump in particular – did not shy away from wrapping up long campaigns across the country with a jet ride back to their full-time Manhattan abode, a tower that Mr. Trump himself has called home for nearly three decades. 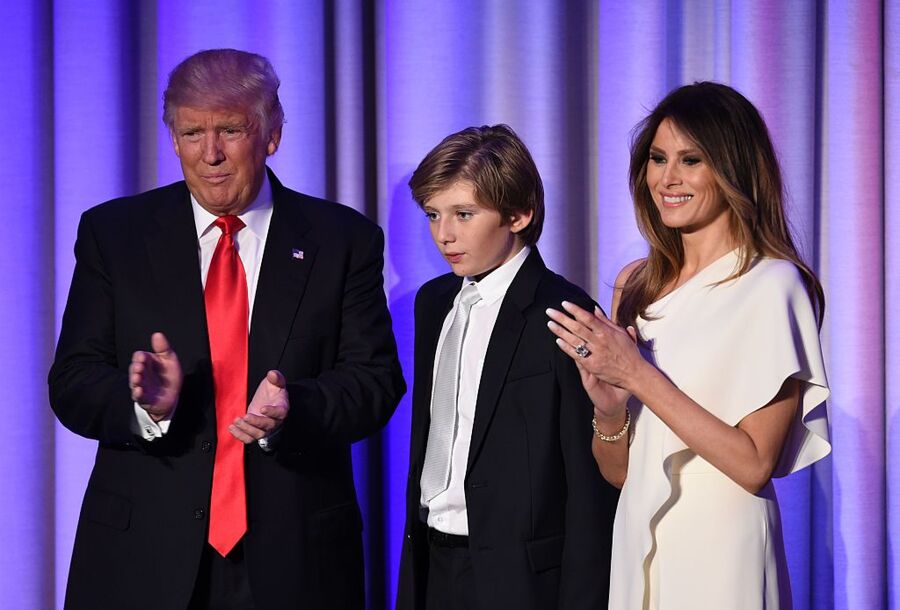 Entrepreneur, real-estate developer, and president-elect Donald Trump became a major player in the world of domestic and international real estate in the late 1960s. One of his first major successes in the world of real estate development was successfully revamping the bankrupt Commodore Hotel into the Grand Hyatt. With multiple income streams and business investments, Mr. Trump maintains a net worth of $4.5 billion.