I grew up in San Francisco surrounded by a lot of very wealthy people. One could even say I "hobnobbed" with the sons and daughters of some of SF's richest families. As such, I had the opportunity to visit a number of amazing apartments all over the city. With that background in mind, in my opinion the apartment I'm about to show you is perhaps the best apartment in all of San Francisco. And that's not just my opinion. Locals believe this double-penthouse has the best views money can buy in San Francisco, hands down, full stop.

Unfortunately, if after reading about this apartment and watching the video tour below, you were hoping to make an offer… it just sold. The sale price?

And I gotta say, $29 million seems like a bargain to me. If this apartment was in NYC, I guarantee it would sell to a hedge fund billionaire for $100+ million. 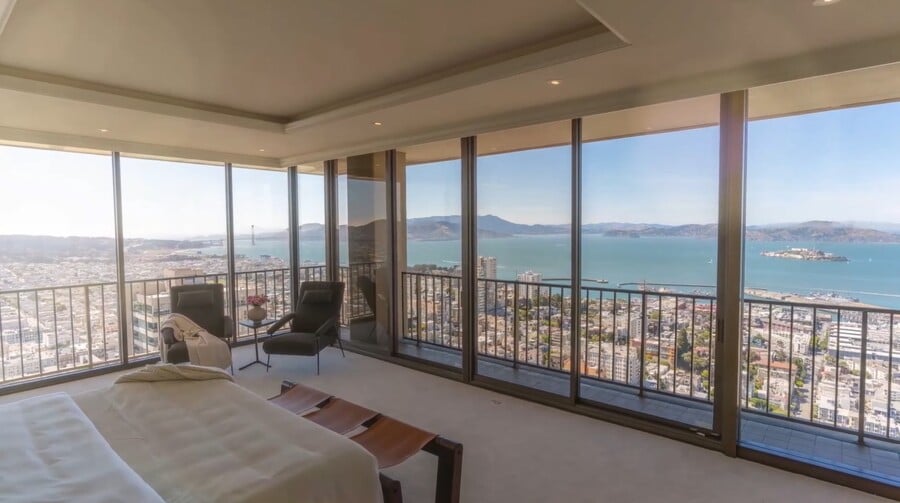 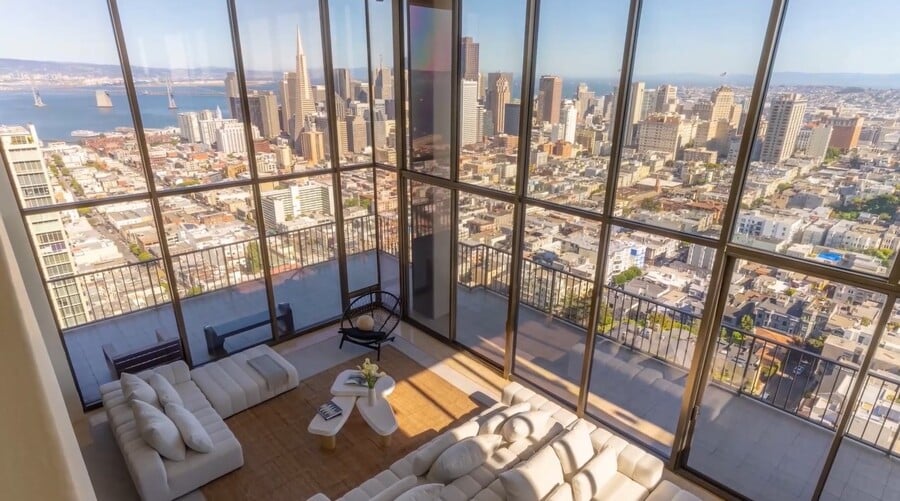 This apartment has a few interesting connections to stories in the Celebrity Net Worth universe. The seller of the unit is the estate of George Shultz. George Shultz is famous for two reasons:

#2: George was one of Elizabeth Holmes' first venture capital investors. He opened many doors for the convicted-fraudster as she launched and subsequently drove Theranos into the ground.

On the second point, if you've consumed any of the Theranos books, podcasts, documentaries or television series, you may recall the story of a lowly Theranos lab tech who grew suspicious of the company's claims and ultimately began feeding info to a Wall Street Journal reporter named John Carreyrou. Carreyrou's articles almost single-handedly led to the company's explosive downfall.

That whistle blower who spoke to Carreyrou was Tyler Shultz. George's grandson.

Before becoming a whistle blower, Tyler attempted to tell his grandfather what was really going on at Theranos but he was flatly shut-out and pressured to to sign non-disclosure agreements which recanted his previous disparaging statements.

Why was George so blindly obsessed with Holmes and Theranos? Because he stood to make a shitload of money on Theranos! Duh!

As a member of the board, Elizabeth showered George with stock options. At the company's peak valuation in mid-2015, George's shares had a paper value of $50 million.

In a true act of love, Tyler was actually protected from his grandfather by his step-grandmother, George's second wife, a woman named Charlotte Mailliard Swig.

Charlotte and George married in 1997. Both of their respective previous partners died in the years before they married.

Today the Swig family owns $3-5 billion worth of commercial real estate assets in New York City, San Francisco and Los Angeles. When Melvin was alive, the family was best-known for owning the Fairmont hotel chain.

In 1997, right after marrying, Charlotte and George paid $5 million for the "South Penthouse" right next door.

The units are accessible through a hallway that was added by Charlotte and George, who proceeded to use North as their private living space and South as an entertaining/guest/office area. North features three bedrooms spread over 5,400 square feet. South has three bedrooms spread over 5,000 square feet. Both apartments have 2-story living rooms with 20 foot ceilings and wrap-around decks.

The monthly HOA fee for North is…

The monthly HOA fee for South is…

For a combined monthly total HOA bill of…

In other words, if you own this unit, you need to set aside roughly $330,000 in pre-tax income every year JUST TO COVER THE HOA FEE!

George Shultz died in February 2021 at the age of 100. Charlotte died in December 2021 at the age of 88. Their estate listed the apartment for sale three months ago. They had multiple all-cash offers and ultimately chose a buyer who paid the exact asking price of $29 million. FYI, that's a record for San Francisco condo sales.

Ok you've indulged me long enough. It's time to show you what I think is the best apartment in San Francisco. Take a look at the video tour below:

The buyer's identity has not been revealed yet but I won't be shocked if we soon find out it was one of these three tech billionaires:

When we find out, we will let you know!