Two Years After Paying $100 Million For A Malibu Mansion, WhatsApp Founder Buys The House Next Door For $87 Million

By Brian Warner on February 17, 2021 in Articles › Celebrity Homes

Jan Koum is the co-founder of WhatsApp. He was born in Kyiv, Ukraine in 1976. Growing up, his family was dirt poor. Their home did not have heat or hot water. When he was a teenager, Jan and his mother fled to the United States as antisemitism was becoming very dangerous in Ukraine. Jan and his mother settled into a two-bedroom apartment in Mountain View, California. His mother worked as a baby sitter. Jan swept the floors at their local grocery. To make ends meet, the family relied on welfare food stamps that were handed out from a drab office complex not far from their apartment.

On February 19, 2014, Jan returned to that same exact drab office complex – which still housed the welfare office! In one hand he had a contract. In the other a pen. He held the contract up to the door of the welfare office as he signed his name. With that pen stroke, Jan sold the company he co-founded – WhattsApp – to Facebook for $14 billion in cash and stock.

I'm not exaggerating, he really did that at that welfare office.

Jan spent a few years toiling away at Facebook, earning a couple billion extra in bonuses, stock appreciation and earnouts. He left in 2018 over concerns about how Facebook's upper management (namely, Mark Zuckerberg) was implementing invasive privacy and ad changes to their beloved messaging platform. When Jan quit, he left $500 million in unvested options on the table. He could have had those options if he stuck around another year. It was actually more like a billion dollars left on the table after FB's share price doubled since he left.

Not that he cares about a "missing" billion or two. After it was all said and done Jan Koum still walked away with a net worth of $12 billion.

And Jan did not waste much time putting that money to work. He was born in a house with no hot water or heat then moved into a two-bedroom apartment with his single mom. Today, Jan Koum owns around $450 million worth of real estate. And we're not talking about office buildings or investments. He literally owns almost a half billion dollars worth of personal residences.

Jan bought his first significant house in 2015 when he paid $8.8 million for a home in Atherton, California. Over the next few years he paid $57 million for several lots in the same neighborhood. In total his new compound spanned 5.6-acres. He proceeded to raze all the previous structures and spent $20 million on a brand new custom home. The garage alone at this compound is 10,000 square-feet, which is convenient because Jan is an avid car collector, especially Ferraris and air-cooled Porsches. He also owns a nearby warehouse where he stores dozens of additional super cars.

In September 2019, Jan planted his foot down south in Malibu with the purchase of a 14,000 square-foot clifftop mansion in Malibu above a beach called Paradise Cove. The purchase price?

Jan's home is located in what is arguably the most-desirable area in Malibu other than a private gated community down the road called the Malibu Colony. But even that's debatable.

To get an idea why this area is so amazing and why a house would cost $100 million, check out this video tour of Jan's first Malibu house:

I say "first" Malibu house in that previous sentence because earlier today it was revealed that Jan Koum made a second Malibu acquisition.

Sorry for all the video embeds, but I really want to you to understand what we're dealing with here. So in the following video, hit pause at the 11 second mark:

If you're paused at the 11 second mark you should see two clifftop homes with paths down to the beach. Do you see the modern-looking home in dead center with the zig-zagging walkway down to the beach? That's the $100 million home Jan bought in 2019 (as seen in the first embedded video above).

Do you see the home with the straight walkway down to the beach? Jan Koum just bought that house for…

Also it's not a walkway. It's a funicular, which is a fancy way of saying an elevator that goes sideways up and down a mountain/hill.

We wrote about Jan's new 3-acre property in June of 2020 when it first hit the market for a cool $125 million asking price.

Musician Kenny Rogers owned this home back in the 1980s. He actually paid to have the funicular installed. And not only did he have to pay the construction costs, when the city of Malibu complained that the funicular was installed without permission or permits, Rogers ALSO had to pay $2 million in fines. 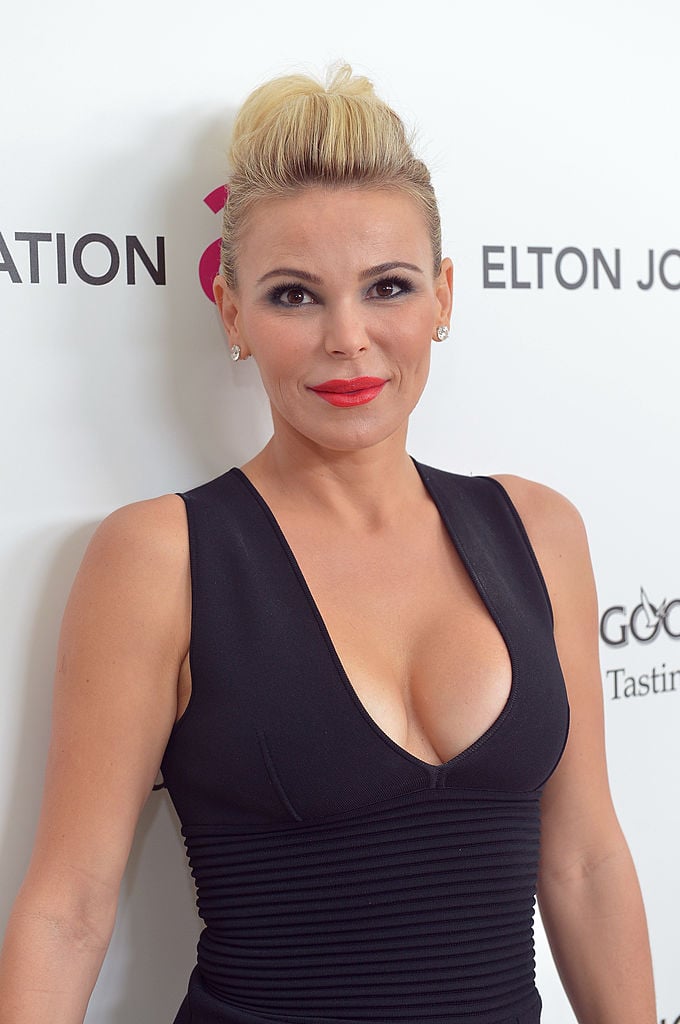 The woman in the above photo is 48. That is not a typo. I just double checked.

Diana was in college when she was forced to flee the at the outbreak of war in 1992. She spent a year as a refugee in Croatia before landing in London where she picked up with her studies.

In 1999 Diana met a wealthy British banker named Roger Jenkins at the gym. They married and had two children before divorcing in 2011 after 10 years. Diana uprooted herself from London to Malibu, buying the home above for $21 million in the mid-2000s. Diana toured the home with her friend, musician Kid Rock. She was tagging along with Kid as he was mansion hunting, but she ended up a buyer.

[Side note – As far as I can tell, Jan and Sanela Diana are both unmarried. With their background and life experiences… they seem like a good match, no? I'd like an invite to the wedding if that happens…]

Here's an aerial shot via Google maps of Jan Koum's new compound. He now owns the two homes in the center of this photo, the ones with beach paths that almost connect at the sand. The home on the far right is owned by television producer Mark Burnett and his wife, actress Roma Downey. The home on the left is owned by a woman named Tamara Hughes Gustavson. Tamara is the largest shareholder in the company Public Storage which was founded by her father, Bradley Wayne Hughes. Tamara's 11% stake gives her a $4.6 billion net worth. 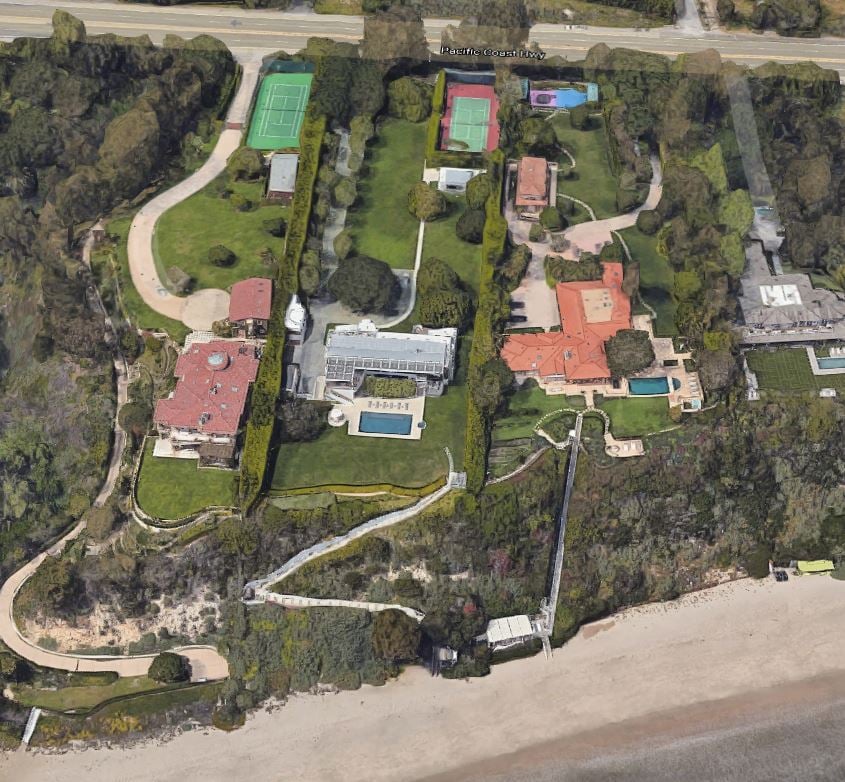 The new house comes with a beach cabana, visible above, that features a retractable ceiling, wet bar, fire pit and built-in barbecue.

If Jan ever needs to get away from Malibu, he can drive about 40 minutes inland (depending on traffic, obviously) to a home in Beverly Hills he bought in September 2020.

The seller of that home was Quibi founder/movie mogul Jeffrey Katzenberg. The sale price of that 27,000 estate?

To reiterate, by my very conservative count, Jan Koum owns $450 million worth of real estate in California alone. That means every year he is cutting $4.5 million worth of checks to the state just to cover his property taxes. That means every year Jan needs to earn (or pull from his savings) $9 million pre-tax just to satisfy the tax man. Can you imagine how much he's spending every year on utilities? And to think, he was born in a family with no utilities at all. Not a bad come up!