By Joseph Gibson on January 5, 2023 in Articles › Celebrity Homes

Now that 2022 is behind us, 2023 doubtlessly has plenty of big celebrity real estate deals in store for all of us to either enjoy vicariously and/or curse bitterly, as the case may be. But right now, it's time for a look back at some of the biggest of last year's luxury real estate transactions carried out by the rich and famous, often between one other.

Back in July of last year, actor Richard Gere spent $10.8 million on an English-style estate in New Canaan, Connecticut. The property consists of two homes with a total of six bedrooms, both nestled within an expansive (and private) 32 acres. The main house, designed by architect Harold R. Sleeper, dates back to 1938. Gere purchased the property from Paul Simon and Edie Brickell, who took a loss of almost $6 million compared to the $16.5 million Mansion Global reports they spent on it back in 2002. You can take a look at the property below:

Another celeb-to-celeb property sale happened in an off-market deal between Jennifer Aniston and Oprah Winfrey. The "Friends" star purchased a handsome four-bedroom, 4,300-square-foot abode from the talk show legend for a reported $14.75 million, a tidy profit for Oprah who bought it in January of 2021 for almost $10.5 million.

Not every star managed to close a sale on their homes in 2022, but some of their biggest listings are probably worth mentioning anyway. Like, for example, legendary rap producer Dr. Dre, who listed his longtime Malibu beach palace for $20 million last fall. The glass-heavy home is designed to maximize its gorgeous beach views and boasts over 8,800 square feet of luxurious interior space – and hopefully Dre will find a buyer for it sometime soon.

Another buyer-less celebrity real estate listing belongs to superstar DJ Calvin Harris, who has once again listed his Beverly Hills property with a discounted asking price of $25 million. The listing truly earns the designation "compound," with four separate structures in addition to the impressive main house. And Harris reportedly converted the guest house into not just one but two recording studios. Take a look in the video below:

Russell Westbrook of the Los Angeles Lakers dropped $37 million on a mansion just down the street from teammate LeBron James in the Brentwood neighborhood. The reportedly off-market deal was with Petra Ecclestone of the famous Ecclestone racing family, who purchased the property in 2019 for almost $23 million. Westbrook has plenty of room in his new house, with eight bedrooms and 11 bathrooms, plus amenities like a home theater, wine cellar, and a four-car garage.

In June of 2022, Hugh Jackman was reported to be ready to part ways with the incredible NYC apartment he's called home since 2008. Realtor.com reported that the three-story West Village condo has five bedrooms, five baths, two half-baths and a total 11,000 square feet of living space. Jackman listed the property for $38.9 million and no buyer has been reported as of this writing. Best of luck, Hugh!

Maroon 5 frontman Adam Levine and model Behati Prinsloo sold one of their many homes to an unnamed buyer for $51 million. The three-acre estate in the Pacific Palisades neighborhood, which at various points used to belong to both movie producer Brian Grazer and (when they were married) Ben Affleck and Jennifer Garner, boasts a 9,000-square foot main house in addition to other structures. It also includes unusual outdoor features like a basketball court, chicken coop, and multiple walking paths. Here's video:

Sylvester Stallone Sold His LA Compound To Adele For $58 Million

Had Sly Stallone found a buyer at his original asking price of $130 million for his 21,000-square-foot LA mansion, he would have had the biggest celeb real estate sale of the year. Instead, Adele reportedly got the home for a huge discount at $58 million.

Back in December, Mark Wahlberg tried listing his massive 30,000-square-foot Beverly Hills mansion again after taking it off the market the first time. In doing so, he slashed the price from $87.5 million to $79.5 million. Of course, even with an $8 million discount his listing is one of the biggest in celebrity real estate of 2022.

While the exact price that Drake paid for the expansive Beverly Hills estate sold by singer Robbie Williams in the spring of 2022 isn't known for sure, an asking price of $85 million was reportedly being sought off-market, and Drake is supposed to have gotten it for somewhere in the mid-$70 million neighborhood. If Drake paid anywhere close to that, he might have made the most expensive celebrity real estate deal of the year, for a compound that includes a 25,000-square-foot main house, a guest house, a tennis court, a swimming pool, and plenty of well-landscaped grounds. Visual material on the home is scarce since it was never publicly listed for sale, but here's a pic from Bing Maps: 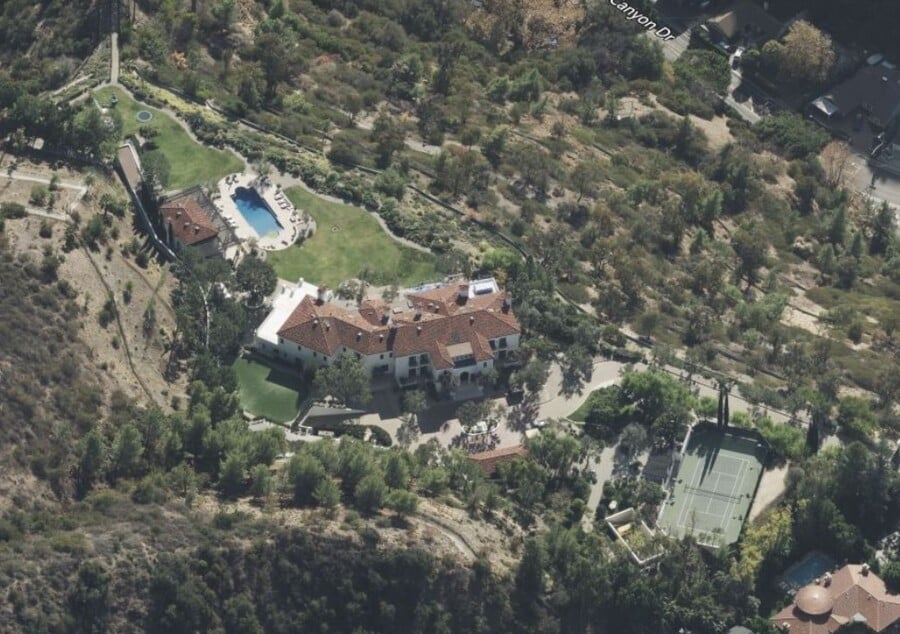