Steven Tyler, the very recognizable frontman for the band, Aerosmith, has experienced just about every high and low that a rock star could experience.  From super stardom, to succumbing to the excesses that often accompany the rock star lifestyle, to a rise from the ashes Phoenix-like, Mr. Tyler has definitely been there and done that.

With Aerosmith, Mr. Tyler has recorded 14 albums, all of which have achieved Gold or multi-Platinum status.  The group has also won multiple music awards, including four Grammy Awards, six American Music Awards, four Billboard Music Awards, and 10 MTV Video Music Awards.  Mr. Tyler has also released a number of moderately successful solo projects, and has collaborated with a number of other artists throughout the course of his career.  He has also been in and out of rehab a number of times, and is currently clean.  He is known for his almost operatic higher register and for his onstage acrobatics, some of which have landed him in the hospital when he has misjudged his distance from the edge of the stage.  Most recently, he has served as one third of the judging team on "American Idol", which is currently in its eleventh season.  His appearance on the show has introduced Aerosmith to yet another generation of music fans, and the band returned to the studio to record a new album between season 10 and season 11 of "Idol".  In 2006, he began dating Erin Brady, and the couple recently became engaged.  Their engagement included a new house in Hawaii, and like everything else in Mr. Tyler's life, his new home is all about rock star-style, albeit a slightly calmer version. 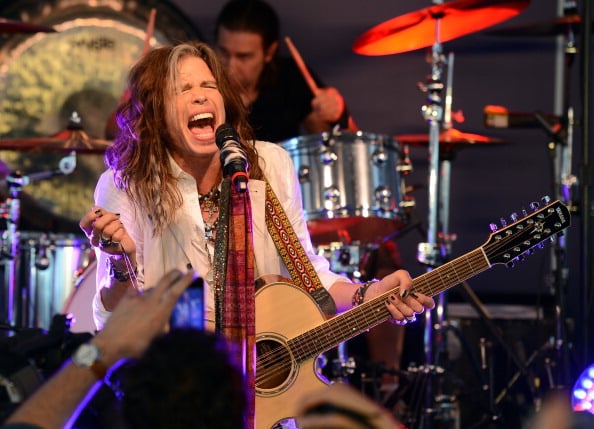 The $4.8 million, two-bedroom, three-and-a-half bath, house, is relatively modest compared to some of his previous homes.  The 3,000 square foot property, which is located in a nature preserve in Maui, also sports a series of decks to view the ocean from multiple locations, a saltwater infinity pool, a massive aquarium, floor-to-ceiling windows, bedrooms that open directly onto wrap-around decks on the second floor, high ceilings, wood floors, marble accents, and stunning views.  Now that Mr. Tyler seems to have achieved a relative level of stability and normalcy, he has wisely chosen a home that suits his more serene lifestyle.