By Joseph Gibson on March 26, 2020 in Articles › Celebrity Homes

Recently deposed casino billionaire Steve Wynn is looking to make a substantial real estate sale, Variety's Dirt reports. Wynn has placed his recently renovated mansion in Beverly Hills up for sale with an asking price of $135 million. That's substantially more than the $48 million Wynn paid for the property back in the summer of 2015, but he's reportedly orchestrated extensive renovations on both the mansion and the surrounding property over the last couple of years, with all new interiors inside and extensive new landscaping outside.

Someone recently asked why we do not include photos of homes in real estate articles. We never use any photos on CNW that we don't have the right to use. Real estate photographers are extremely litigious. When the houses have YouTube video tours, we include those to give an visual for the house. When they do not, we use a photo of the celebrity that we have the right to use. We do not ever steal random photos from the web because we a) respect copyright and b) do not enjoy lawsuits.

The mansion sprawls over more than 27,000 square feet of interior space, with 11 bedrooms and 16 baths. It was built in the early 90s for Maurice Marciano, the co-founder of clothing brand Guess?, and was designed by architect William Hablinksi in the International style (the exterior of which appears to be mostly unchanged from Wynn's remodel). 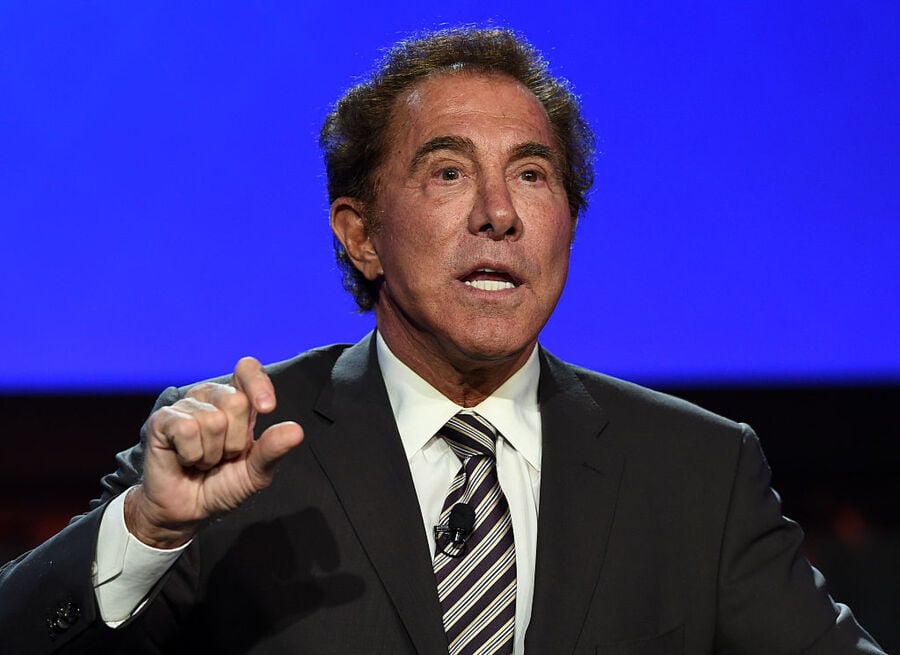 There's a private elevator, a professional-grade screening room, a large master suite with its own two bathrooms, and separate quarters for household staff. Outside, there's that new park-like landscaping by Robert Truskowski, a fully equipped tennis court complete with air conditioned seating house and kitchenette, a feature which is duplicated in the pool house as well.

As you might reasonably guess, Wynn has plenty of other properties besides this one, including Aquarius, a massive 302-foot superyacht that also qualifies as a "floating mansion." He also owns a few more conventional residences, like a country club mansion in Las Vegas, a $70 million Ritz-Carlton penthouse apartment in New York City, a 25,000-square-foot ski chalet in Sun Valley, Idaho, and a $43 million beachfront mansion in Palm Beach, Florida.

Unfortunately, there doesn't appear to be much in the way of visual materials on the mansion that are publicly available, so if you want a close look at the Beverly Hills Wynn mansion you might have to make him an offer yourself.