Spelling Manor Comes Back On The Market For $165 Million

By Joseph Gibson on March 2, 2022 in Articles › Celebrity Homes

A little over two years ago, a property that was previously known as Spelling Manor (named for its former owner, TV mogul Aaron Spelling) but is now simply called "The Manor," sold what was then a Los Angeles county record $120 million. Today the home is back on the market once again. The Manor can be yours today for the low-low price of…

Aaron Spelling commissioned this mega-mansion in 1988. The residence features a 56,500-square-foot mega-mansion that is an ode to 1980s-style opulence. It is the second-largest private residence in Los Angeles behind The One over in Bel Air. The Manor has 2,000 more square feet of living space than The White House.

There are 14 bedrooms and a whopping 27 bathrooms (depending on how you prefer to count its array of 2/3rds and half baths). Of course, opulence is more than facade-deep, and The Manor has plenty of amenities to go along with its luxurious appearance. There's a bowling alley, a beauty salon, what the listing describes as a "legendary library" and a "professional screening room." Multiple sitting rooms, gift-wrapping rooms, and flower-cutting rooms round out the home, and between all these and the gorgeous lawns, tennis court, swimming pool, fountains, and rose gardens outside, it's easy to see the appeal of a home like The Manor for someone looking to live in palatial luxury and celeb-friendly privacy: 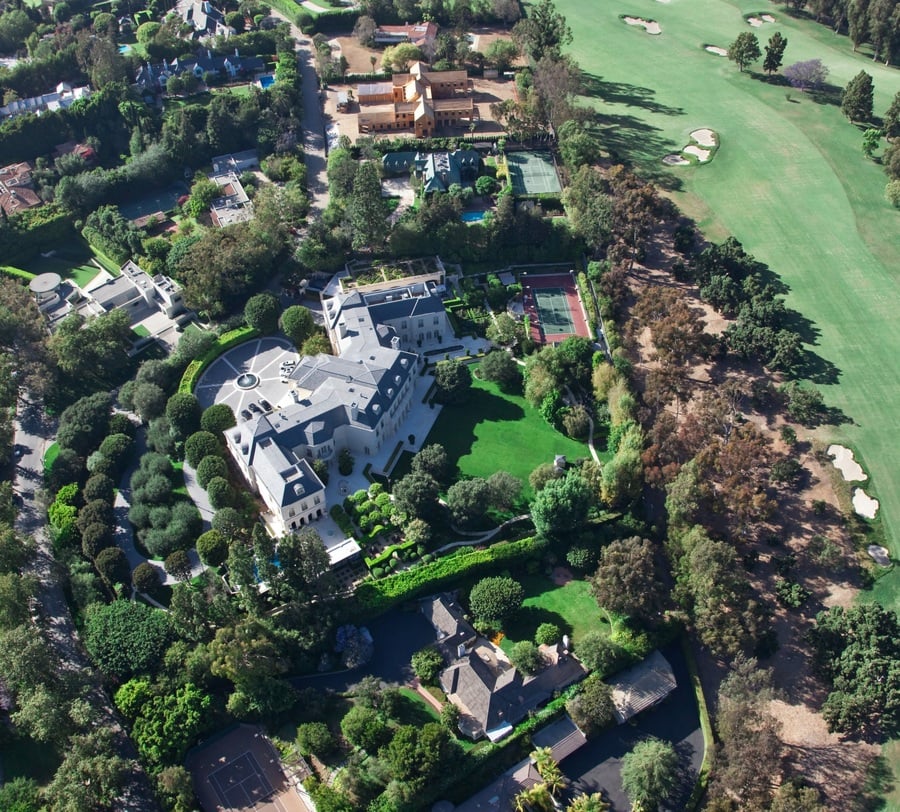 The Manor's official listing goes on:

"An unparalleled offering, an unrivaled setting, a showplace of the highest caliber. The Manor is undoubtedly one of the finest estates in the World. Majestically sited on 4.68 acres in the heart of Holmby Hills, The Manor offers complete privacy bordering the Los Angeles Country Club…A rare opportunity to acquire one of the most important estates ever created."

A few years after Spelling's death, his widow Candy Spelling placed the home on the market for the first time. Her initial asking price was $150 million. At that time it was the most-expensive residential real estate listing in US history.

Unfortunately this was right around the time of the global financial crisis so the property languished on the market for two years before Candy finally accepted an offer. Her accepted price?

The age of the acquirer, British socialite Petra Ecclestone, at the time of her purchase?

Petra proceeded to perform a fairly major overhaul on the property, reportedly spending an additional $20 million on renovations that at the peak employed more than 500 workers on the site every day for months.

Petra's buyer was reportedly a Canadian billionaire named Daryl Katz. Katz is best-known for owning the Edmonton Oilers NHL team. His $120 million purchase price set the record (a record that has since been demolished several times over) for most expensive home sold in California history.

If someone ends up paying $165 million for the home in the near future, unfortunately they will not set any records.