By George J. Pilibosian on September 24, 2016 in Articles › Celebrity Homes

Adam Levine of The Voice and Maroon 5 fame and fortune and his wife and Victoria's Secret model, Behati Prinsloo, are having trouble unloading their family home. After almost three months since their Beverly Hills home has been on the market, the couple, currently expecting their first child – a girl – has dropped the asking price for the sumptuous abode. They are looking to part ways with the lovely, totally rebuilt Beverly Hills estate, and could stand to make a hefty profit on the sale, even if they sell it at anywhere close to the newly-discounted price.

The 7,100-square-foot house is located in 'a tiny and unheralded gated enclave' overlooking Benedict Canyon, according to Variety, and was originally listed at $17.5 million, but because of a lack of interest, it has now been put on the market at the much lower price of $15.95 million. Take a look at what you could have for this now deeply-discounted showplace. 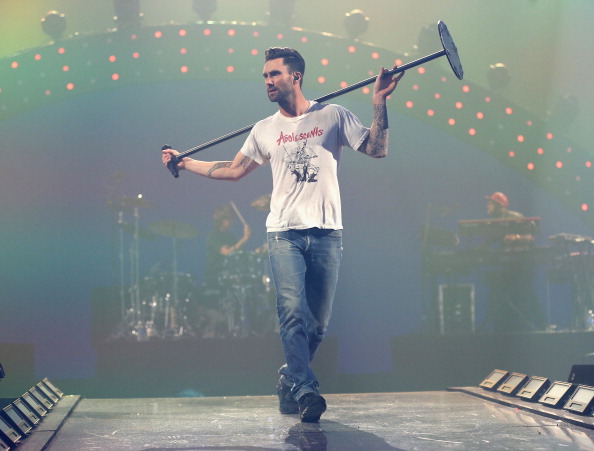 Modern touches? How about a two-story car collector's garage that comes with an elevated car lift, an in-home screening room, and a hidden, 'speak easy'-style card room.

The grounds include a large tennis court, a brand new swimming pool, and a circular driveway in front of the single-story home.

The home also has a way of making the inside seem like it's outside and vice versa.

Levine bought the showplace in October 2012 for $4.83 million, and is now unloading the thoroughly overhauled property for $15.95 million. In addition, he and his wife, Behati Prinsloo, have also listed a Manhattan loft they bought together just a year and a half ago. It's clear Adam Levine usually attracts what he wants, so we think he will be able to sell his Beverly Hills pad for a very tidy profit.