By Simon Gerard on November 25, 2011 in Articles › Celebrity Homes

It's common knowledge that superhero entrepreneur Sir Richard Branson owns Necker Island in the Caribbean, a favorite hangout for celebrities, but did you know he owns a total of four islands? He also owns Makepeace Island, which is a heart-shaped retreat on an Australian river, Great Britain Island, which is part of "The World" in Dubai (a collection of manmade islands that form the map of the world) and Moskito Island, which he recently gave away to some lemurs. As the first part of our series on Celebrity Island Homes, Branson is the top choice to kick it off. 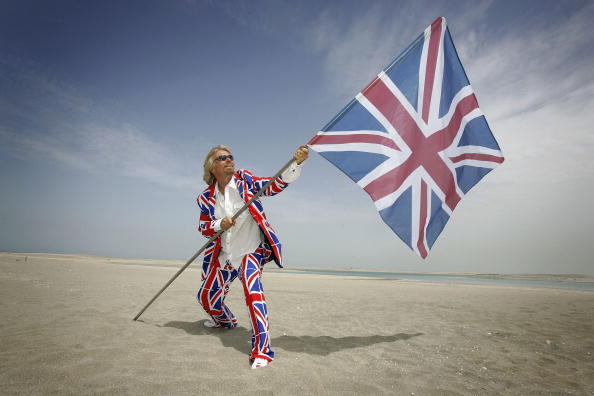 No, he didn't name the islands after his company and he only owns two of them. He first visited the Virgin Islands in 1978 for a vacation and to scout for potential real estate. With the fantasy of having a private retreat to take rock stars from his new music label to, he toured around by helicopter and spotted the 74-acre Necker Island. Over 30 years ago, he was nowhere near the billionaire he is today, and made a super lowball offer of around $150,000 for the $7.5 million island. He was promptly denied and kicked off the island. The British lord who owned it ended up needing the short-term cash soon after and settled to sell for only $270,000 (down from $7.5 million don't forget). At only 28 years old, 6 years after starting the Virgin Group, Richard Branson owned his first private tropical island.

The government rules, which are common with foreign land purchases like islands, said he had to develop a resort there within 5 years or the government gets it back. Within three years and after around $10 million, he turned it into a Bali-styled villa to accommodate 28 guests. To be truely authentic, he had the villa built in Bali, disassembled then rebuilt on his island. This includes private beaches, pools, tennis courts, a personal chef, a staff of 30, spectacular views and a range of high end water toys. Richard Branson spends about two months in the summer there with his family and often invites friends or celebrities to stay there. But for most of the year, the whole thing can be yours, starting at only $54,000 a day!

Necker Island has always drawn the rich and famous, especially for private weddings and honeymoons. Richard Branson, in his typical style, married his wife there by swinging down off a helicopter onto the beach. Brad Pitt and Jennifer Aniston spent their honeymoon there in 2000. Eddie Murphy also spent his honeymoon there in 1993. Google founder Larry Page got hitched there in 2007 and so did Jimmy Fallon the same year. Simon Cowell proposed to his wife in 2010 and Victoria and David Beckham also spent their ten year anniversary there. Paul McCartney's ex-wife Heather Mills reportedly threw a "divorceymoon party" there after the breakup, costing around $400,000. And pretty much every A-list celebrity has been there to party at least once.

Tragedy hit Necker Island last summer, when lightning from a tropical storm burnt the $90 million retreat to the ground. Brandson was there with his family and when the fire started at 4am, was seen running around naked trying to save everyone. Oscar-winning actress Kate Winslet was a guest and was credited with saving Branson's 90 year old mom and taking her to safety. But don't worry, Branson has already restored the resort and has it back running. Probably rebuilt it with his bare hands after paddling the wood as a raft over from Bali.

Also known as Mosquito Island, which doesn't sound very appealing, so Branson probably changed the spelling so it sounds cooler.  Found close to Necker Island, he picked this one up for around $15 million in 2007. He's still working on creating a premier eco-friendly resort, but has already started accepting guests. The guests, while not celebrities, get to stay for free and are being brought from zoos around the world. He's started with some ring-tailed lemurs, with red ruffled lemurs and maybe more types to follow. Lemurs are only native to Madagascar Island and are facing extinction and loss of habitat. So Branson has taken the lemurs out of captivity to his island to will let them kick back and get it on. So now we can add "save cute endangered animal" to his eccentric billionaire checklist. NBD for Ricky Branson.

Branson bought Makepeace Island with Brett Godfrey, co-founder of Virgin Australia in 2007 for $3 million. It used to be called Pig Island, but he changed it to Makepeace, which matches the heart-shape a lot better. He's recently started renting it out to guests for $8,000 a night for the whole heart that can hold 21 of your friends. Covering 25 acres, it's found in the Noosa River, found on the coast of Queensland, Australia. The location is an UNESCO Biosphere Reserve, which means there are all kinds of exciting animals hanging out like dolphins, sea-turtles and humpback whales. Definitely a big fan of Bali, this resort is styled like his Necker Island Resort.

If you haven't heard of "The World" in Dubai recently, it's because it's pretty much deserted. It is a series of small artificial islands off the coast, shaped to form the globe. It's still not finished after 10 years of work, with the economic downturn in 2008 killing its progress.  Richard Branson quickly jumped on buying the mini-version of his home country in 2006, no other news has been reported on it since. Other than the gratuitous photo shoot that the first pic of this post is from.