Own A Piece Of Macabre History: The House Where Marilyn Monroe Overdosed

The house where Marilyn Monroe took her fatal drug overdose is for sale. The 4 bedroom, 3 bathroom, 2,624 square foot home is in the tony Los Angeles neighborhood of Brentwood. It is the only home the iconic actress ever owned. It is selling for $6.9 million.

Marilyn Monroe found and bought the home herself in early 1962. The Spanish style house was built in 1929 and sources say she paid either $67,000 or $90,000 for the home. It rests in what was (and still is) a star-studded enclave of the West Los Angeles neighborhood. Monroe didn't live in the home for long, as she was found dead at age 36, in August 1962, laying face down and naked on her bed. She overdosed on sleeping pills.

The house has changed hands a few times since Monroe's ownership of it. In the early 1970s, actors Veronica Hamel and Michael Irving bought and renovate the house. During the renovation, contractors discovered an elaborate government grade telephone tapping and eavesdropping system that ran through every single room. This bugging system gave life to rumors that Monroe was involved in an illicit affair with President John F. Kennedy. Conspiracy theorists believe that Monroe was being watched by either the mafia or the Kennedy family. 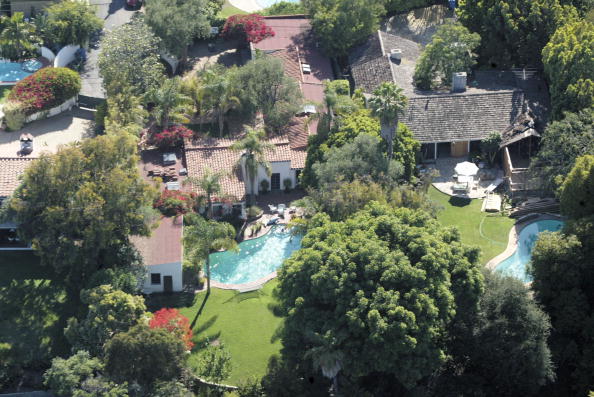 The house is located at the end of a small cul-de-sac and behind a high privacy wall, secured gate, and lovely trees. Monroe shared the home with her long time confidant and housekeeper Eunice Murray. The kitchen was updated sometime prior to 2010. The property has a red brick patio and a free form swimming pool as well as a small guesthouse/cabana with its own vine-covered porch. The backyard has a large grassy area, a small citrus grove, and terraced gardens.

The Brentwood neighborhood is known locally as The Helenas. It is a series of 25 cul-de-sacs that has been a favorite of celebrities for many decades. Currently Ewan McGregor, Naomi Watts, and James Belushi own property in this neighborhood.